Changes to the political power dynamics of El Salvador, some surprising and some expected, after the March 12th elections for Representatives to the Legislative Assembly as well as for Mayors and Municipal Councils are going to have important effects on policy making for the next three years. 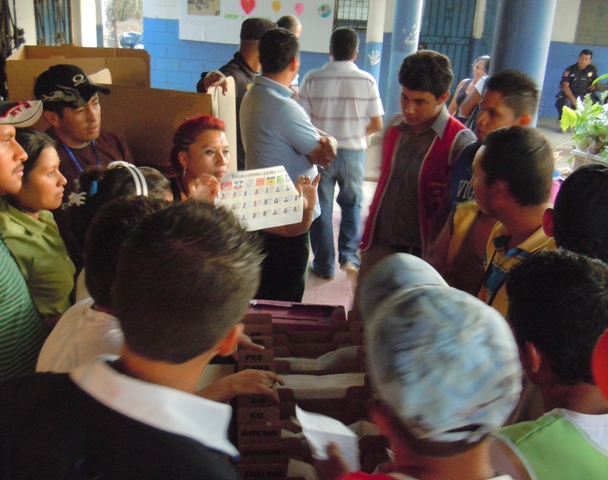 The FMLN lost three seats, after holding the most seats in the Legislative Assembly (but not enough for a simple majority), and will now have 31 representatives next term.  ARENA gained seats and now has the largest number of representatives (34) in the Assembly.  GANA, a right-wing party that split from ARENA in 2009, won 11 seats.  This was the party’s first time participating in an election process.  The CN (formerly PCN) won 6 seats, the PES (formerly PDC) 1, and the CD will have 1.  The Supreme Electoral Tribunal has posted the exact percentages and break-down on their website

Simply put, the struggle for anti-mining legislation continues. The FMLN is the only elected party that has publicly committed to approving an anti-mining ban, and now more than ever the decision whether or not to pass legislation to ban mining is falling on GANA’s shoulders.  GANA now has the exact number of votes to pass bills for ARENA or for the FMLN (assuming the CD votes with the FMLN).

While this was more or less the same division as the past term, GANA was less stable and not very centrally organized.  Traditionally in El Salvador, representatives always vote according to the orders given party leadership (unlike in the U.S. were Congresspeople can be persuaded to vote against their party).  However, GANA has had a fairly decentralized leadership strategy, where some candidates claimed to have the freedom to decide how they wanted to vote. Now that GANA has consolidated their power in the Legislative Assembly, it remains to be seen how they control voting in the party.  In the past, including during campaigning, individual GANA representatives have stated their support for a mining ban, and claimed they would vote in favor, even though GANA as a party had not given an official stance.  It is doubtful that those candidates will now be able to make such claims.

In terms of mayors, Jose Bautista continues as Mayor San Isidro, and ARENA remains in power in Ilobasco, Victoria, Sensuntepeque and the PCN won Guacotecti, which means there will be no significant changes to mining policies in those areas.  In Chalatenango, the FMLN maintained control of the majority of municipalities that would be affected by mining (Arctatao, Nueva Trinidad, San José Las Flores, and Nueva Concepción, although the latter was by less than 100 votes).  In La Unión, Santa Rosa de Lima (where the Commerce Group mine is located) was a very close race that ended favoring ARENA over the FMLN.  The rest of the results for the municipal elections are on the TSE website.

The National Roundtable against Mining (the Mesa in Spanish) has not had a chance to evaluate their campaign to pressure candidates yet.  However, what is clear after looking at the results is la lucha continua.

For more analysis in Spanish of the elections and what they mean in terms of mining click here.

President Obama’s visit to El Salvador in March of 2011 caught the attention of the international anti-mining movement. Over 140 international social organizations, including U.S.-El Salvador Sister Cities, the Institute for Policy Studies, the Sierra Club, Public Citizen, CISPES, and WOLA, signed a letter to President Obama highlighting the dangers of CAFTA and the investor rights protected in free trade agreements.

The letter states that “rather than supporting El Salvador’s commitment to protecting its citizens and environment, the United States, through its current trade policy, is allowing companies to punish the people of El Salvador for pursing those objectives.”  The letter calls on President Obama to publicly state his opposition to the Pacific Rim case against the Salvadoran government. It also demands the President state his support for revising CAFTA and for the Salvadoran government’s investigations into the murders of anti-mining activists.  Lastly, the letter calls on the President to prevent making similar mistakes by eliminating investor-state private enforcement mechanism in pending free trade agreements with Korea, Panama and Colombia.

Social organizations weren’t the only ones to weigh in on the matter.  A similar letter was signed by 19 Congressional Representatives and reiterated the same main demands.  The letter was sponsored by Tammy Baldwin (WI), Michael Michaud (ME), Donald Payne (NJ) and Peter Defazio (OR).  Two of the four sponsors (Baldwin and Michaud) were contacted, cajoled and convinced by our very own Sister Cities committees.  The letters received attention in the U.S. and Salvadoran press and was published in a paid ad in one of the major Salvadoran newspapers. 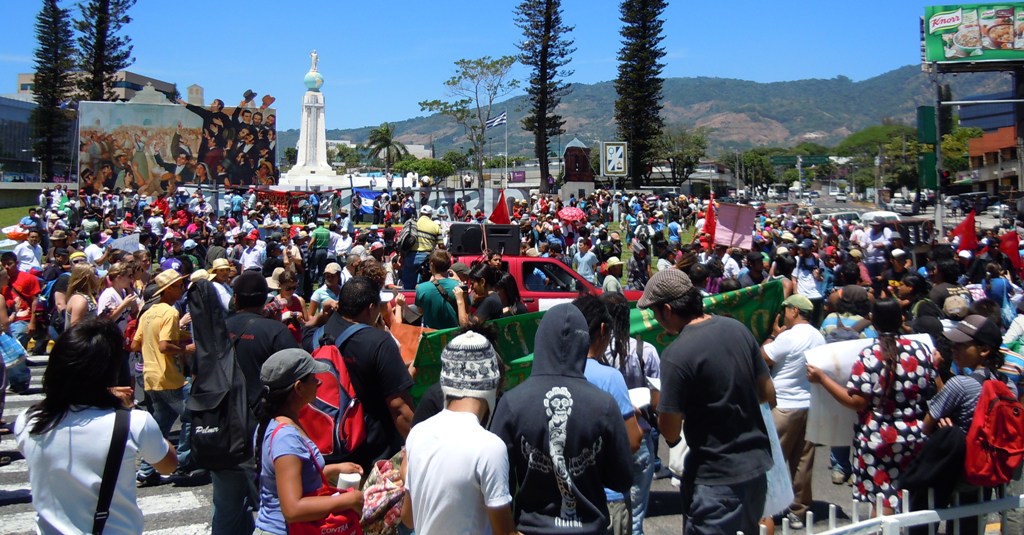 The National Roundtable Against Metallic Mining in El Salvador participated in the activities in San Salvador around Obama’s visit and issued their own statement.

The International Coalition against Mining in El Salvador also organized a press conference which caught the attention of CNN en Español which arranged a special interview with Hector Berrios of the National Roundtable against Mineral Mining.  The interview was supposed to be 7 minutes long but was cut off after 4:30 minutes, when the journalists interviewing Berrios tired of his strong criticisms of CAFTA and the U.S. trade policy.  At the end of the interview one of the flustered journalists interrupted Berrios and declared that free trade agreements benefited Central America because they increase the most important export to the United States: undocumented immigrants.  When Berrios implied this was actually a negative result of right-wing government policies, the journalist cut off Berrios mid-sentence and concluded by saying  “I don’t know if they are from the right or from the left but I see [Salvadoran immigrants] working and producing in Miami, and so many more should come.” Clearly, these journalists have a lot to learn about free trade agreements, immigration and Central America.

In September of this year, the price of gold reached a record high, breaking $1,900 per ounce for the first time in history. This unprecedented spike in gold prices has come in the midst of the U.S. debt crisis and the financial turmoil sweeping over Europe. Although prices have tempered since then, hovering around $1,650 per ounce in October, the overall price of gold has more than quintupled over the past decade.

The rising uncertainty of today’s economic climate has only intensified the allure to invest in this precious metal, which, unlike the dollar and the euro, has a value that is not tied to sovereign debt or hobbled economies, making it a safer investment. That’s why recent boosts in gold prices will likely fan the already raging flames of today’s gold rush, which began when the value of gold first shot up in the early 2000s.

For the full text of the article.