Members of the National Roundtable Against Metallic Mining in Salvador demanded all presidential candidates to publicly state their parties' position on the issue of mining in the country. “Mining is one of the one of the most aggressive industries that harms biodiversity, public health and the environment,” stated a release from La Mesa.

"We demand the ARENA party and its candidate Norman Quijano, to state clearly where they stand on the issue of metal mining in El Salvador," said Edgardo Mira, director of the Center for Research on Investment (CEICOM), during a press conference in front of the headquarters of the right wing party in San Salvador.

Environmentalists are lobbying for all presidential candidates campaigning for the February 2014 presidential elections to endorse a law proposed by the National Roundtable Against Mining to make El Salvador the first country to prohibit metal mining in the world.

Letter to the Legislative Assembly of El Salvador

Members of the Executive Committee
Legislative Assemble of El Salvador

Dear Members of the Legislative Assembly:

The undersigned members of the National Roundtable Against Metallic Mining in El Salvador, return to you again exercising our right to petition enshrined in the Constitution of the Republic, to establish the following:

1 - The National Roundtable Against Metallic Mining for more than eight years has been informing officials of different institutions government, media, communities affected by different mining projects and the Salvadoran population in general that metal mining is one of the world's most predatory industries due to the use of polluting chemicals such as cyanide, and that its ultimate impact results in polluted waters. According the environmental impact study presented by Canadian mining company Pacific Rim, its el Dorado project located in San Isidro, Cabañas, could be using up to 10.4 liters of water per second, equivalent to about 327, 970.000 liters of water per year.

Scars of civil war still fresh in the country’s social landscape. After years of civil war El Salvador remains a fragile country both politically and economically. With a geographical territory a third the size of Tasmania, a population of 6.2 million and scare water resources, the country struggles to provide a decent livelihood for all of its citizens. Since theend of the civil war in 1992, successive governments of this small Central American nation have sought to industrialise the country by opening up the economy and encouraging foreign investment.

“We give them jobs and they give us gold”

Even though mining has not featured strongly in El Salvador’s economic history, mining companies have taken advantage of the country’s relaxed foreign investment rules to start exploration activities. Since the early 2000 as many as 10 transnational mining corporations are prospecting for gold and other precious minerals buried under the northern mountains which provide the main source of clean water, fresh air and local agricultural production for the country.

On June 1st, the International Centre for the Settlement of Investment Disputes (ICSID) ruled that Canadian mining company Pacific Rim would be allowed to continue its $77 million lawsuit against the Salvadoran government by basing its claims in domestic investment law.

Yesterday, the National Roundtable against Metallic Mining (the Mesa) mobilized over a hundred people to support their urgent demand to reform said law. Theypresented a request to the Legislative Assembly detailing a reform that would ensure that corporations are no longer afforded the option of suing the government in the ICSID, before filing claims in domestic courts.

Below is an editorial aired on the ARPAS Radio Network that calls for support for the Mesa.

By, the ARPAS Editorial Team

Yesterday, the National Roundtable against Metallic Mining asked the Legislative Assembly to reform the Investment Law, a piece of legislation that allows transnational corporations to sue the government in international tribunals and bypass the domestic justice system.

Article 15 of this law establishes that when controversies occur between foreign investors and the government, regarding investment in El Salvador, investors can go directly to the International Centre for the Settlement of Investment Disputes (ICSID), a corporate tribunal at the World Bank with its headquarters in Washington.

This legislation has allowed mining companies like Pacific Rim and Commerce Group to sue the government in the ICSID when the government denied their operating permits.  Pacific Rim dried up wells and created violence in Cabañas, which lead to their exploitation permits being denied; and Commerce Group’s exploitation license was revoked because it contaminated the San Sebastian River in La Union.

But, unsatisfied with the legitimate and fair decision taken by the Salvadoran government, both transnational corporations went to the ICSID in order to sue the country, basing their cases in the Investment Law and in the Central American Free Trade Agreement (CAFTA), the latter of which was ratified by a right-wing legislative assembly during the Antonio Saca government.

The Investment Law and free trade agreements are a key part of the neoliberal legal structure implemented by ARENA governments that favor national and foreign big businesses at the cost of the public interest in the country.   For this reason, the first steps of building a new economic model in which prioritizes national interests, would take this damaging neoliberal legal framework apart.

This why the efforts of the National Roundtable against Mining are so important:  we need to reform or overturn the Investment Law and CAFTA in order to replace them with laws and trade agreements that promote investment and trade, but without infringing on the sovereignty and self-determination of the country, the protection of the environment and the rights of the population.  Therefore, all the patriots and everyone who feels tied to this country should support the Mesa’s motion and demand that the Legislative Assembly revise and modify all the investment legislation and trade passed during the ARENA governments and that supports the neoliberal model that we need to change. 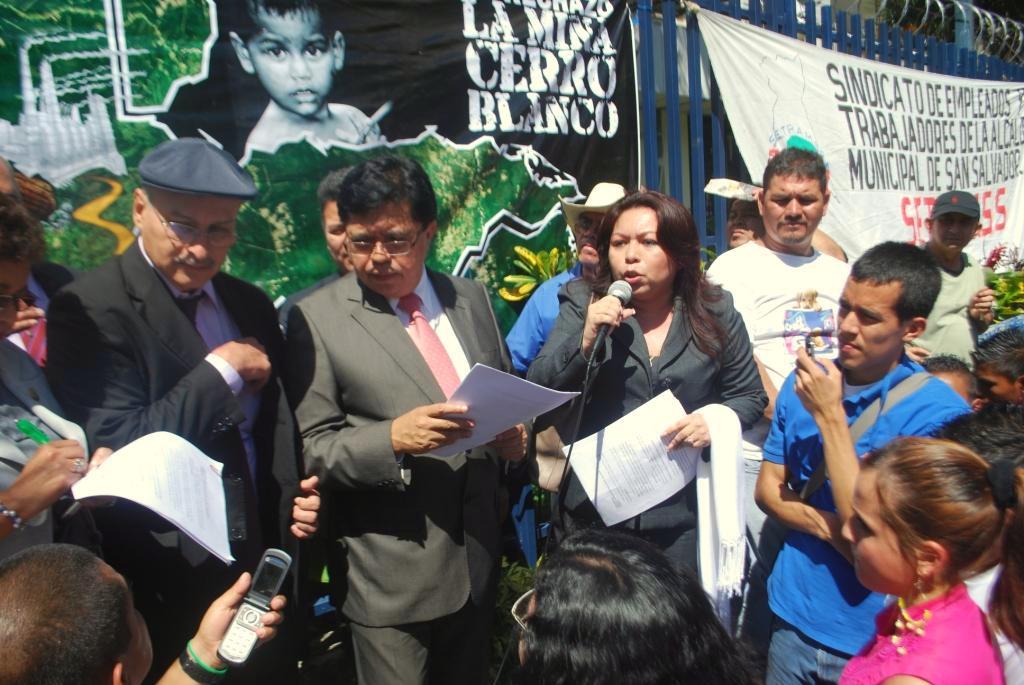