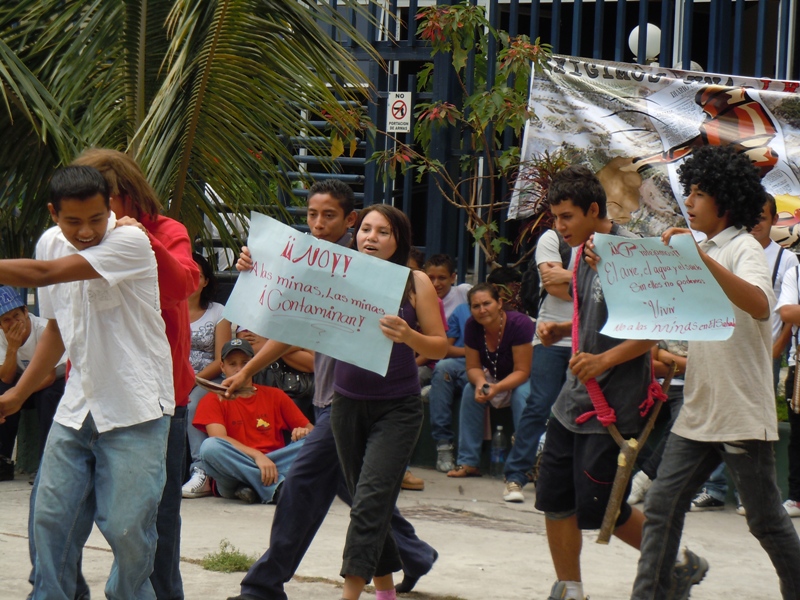 In honor of World Water Day, which is celebrated on March 22, the National Roundtable against Metallic Mining (Mesa in Spanish) gave representatives from the Environment and Climate Change Commission of the Legislative Assembly a copy of the mining sector Strategic Environmental Assessment (SEA), which to date has not be officially released by government authorities from the Ministry of the Environment, nor Ministry of the Economy.

The activity was organized as part of the events for Water Action week, where the Mesa  focused  on banning metallic mining as a situation that cannot be put off as well as on the fact that the conditions necessary to stop the deterioration of the quality life of the people should be guaranteed as soon as possible.  They emphasized that the Metallic Mining Ban bill, presented to the legislative assembly in 2006, should be discussed and immediately approved.  There are no more excuses.

If the obstacles to date have been the lack of the Strategic Environmental Assessment (SEA), whose results have been withheld since September of 2011, the presentation of the finished SEA today should allow for the immediate debate to begin.   The irresponsible silence maintained by authorities from the Ministries of the Environment and Economy towards the population has found its accomplice in the Legislative Assembly because they have stalled the discussion.

The Environment and Climate Change Commission of the Legislative Assembly no longer has any excuse to delay the discussion about metallic mining.  The Mesa reiterated that the communities affected by mining in El Salvador and the social organizations that oppose metallic mining should be included in the debate because they understand the issue and know the terrible effects said industry has had on Guatemala, Honduras, Mexico and even Costa Rica and Panama, where they have at least banned open-pit mining.

In 2010, the United Nations Disaster Assessment and Coordination report classified this country as the most vulnerable in the entire world.  That same year, the Ministry of the Environment and Natural Resources (MARN in Spanish) stated that barely 2% of the rivers in the country have water classified as “good.”  The rest, 98%, are average or bad.  The Economic Commission for Latin America and the Caribbean (ECLAC) has also announced that El Salvador is on the verge of water stress, which is to say that the country is beginning to have less than the minimum average annual amount of accessible water.  Are  more statistics to prove the vulnerability?

To confront this situation, the Mesa believes that allowing metallic mining to be established would be no more and no less than a coup de grace for our country.  The unregulated use of water (for ex:  the El Dorado mine that would use 900 thousand liters of water a day), the wide spread use of highly toxic chemicals like cyanide, the destruction of landscape and ways of living, are more than enough reasons to ban mining.

For the original in Spanish.