Aldo Orellana Lopez of TerraJusta joined panellists Carla García Zendejas (Center for International Environmental Law), Jen Moore (Institute for Policy Studies), and Vidalina Morales (Cripdes El Salvador). With reference to particular examples in Latin America they discussed arbitration suits (Investor State Dispute Settlement) which have been brought by extractive industries in relation to licenses and operations which are being resisted by communities defending their territories, environment and human rights. Aldo spoke in particular about the ‘Aymarazo‘ in Peru and the legacy of Chevron-Texaco in Ecuador. 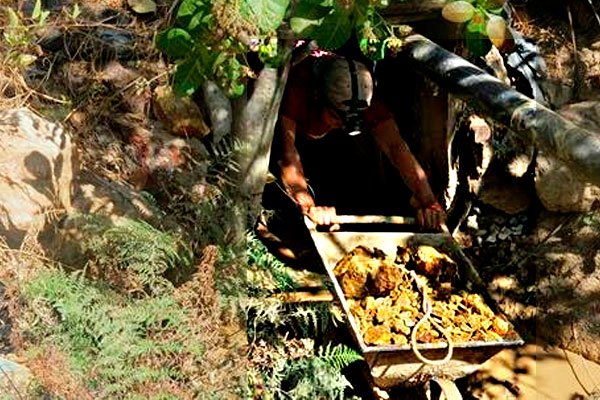 The mining industry does not provide enough income to cover the employment, food, and quality of life needs of the communities in the department of Cabañas.  Thus, reflecting on alternatives that guarantee improved living conditions is a necessity, according to the study ¨Economic alternatives to metal mining", by Dr. Vladimir Pacheco.

Agriculture and livestock ranching represent two of the activities that communities from Cabañas are currently engaged with, and could be promoted as alternatives to artisanal and industrial mining. These activities can generate higher incomes and a better quality of life, compared to what could have been achieved with mining activities. This is the conclusion of the study on "economic alternatives to the extractive industry", carried out by the Association for the Development of El Salvador CRIPDES and the Association ADES from Santa Marta.

The mining industry does not provide enough conditions to improve access to employment, food, water and higher quality of life of the communities in the department of Cabañas. Thus, reflecting on alternatives that guarantee improved living conditions must be an option.

In addition, the study reveals that the economic benefits of the mining project would not contribute to enhance the quality of life of the inhabitants of Cabañas, so it is the State that must take action. "Betting on the development of the local economy, the productive capacities of small producers, would be a way of improving the quality of life of the population," said Antonio Pacheco, representative of ADES Santa Marta.

The organizations hope that this study will serve as a policy blueprint for the Salvadoran government to speed up the closing of artisanal mines, to ensure compensation for the damages caused by the industry and finally to comply with the mandate embodied in the Law on Prohibition of Metal Mining, approved in March of 2017.

The study was also presented to communities in Cabañas. Every year the inhabitants of the communities of Santa Rosa, Trinidad and La Maraña in the Department of Cabañas, fervently commemorate the life of land defenders Ramiro Rivera, Marcelo Rivera and Dora Sorto, who were criminalized and killed for opposing mining projects in this area.

On this occasion, the commemoration was held in the town of Maraña, home to some of the victims of the repression unleashed by Pacific Rim Mining in 2009. During this event, dozens of men and women attended to celebrate the legacy of the leaders who led the struggle against mining companies in the country, and paid with their lives for it, and also to celebrate the victory for whom these defenders gave their lives.

The ombudsperson’s recommendations could include the withdrawal of Canadian government political support (such as Trade Councillor support) and financial support (such as funding or political risk insurance from Export Development Canada), as well as advice to the Government of Canada on policy and legislative changes needed to prevent mining-related harms before they occur.