The Archbishop of San Salvador, José Luis Escobar, suggested Sunday that the government should go to international organizations if the threat from a gold mine in Guatemala that could contaminate water in El Salvador is not resolved bilaterally.

SAN SALVADOR - The Catholic leader said in his Sunday press conference El Salvador "would have to go to international justice mechanisms" if the government can not prevent a mine which may cause damage in El Salvador.

Salvadoran environmental organizations have complained that the Cerro Blanco mine, located in Jutiapa, Guatemala, could contaminate the lake Güija and Lempa River, the largest river in this country.

The mine, owned by Canadian mining corporation GoldCorp Inc. is still on its exploration phase.

Escobar made a "call" to the government and Salvadoran members of the legislature to "have this resolved", although he acknowledged that the government “is taking action" on the case.

If it is argued that "it cannot be resolved" because "it is a problem of Guatemala", the fact is "that it affects us because we drink this water," said the Archbishop of San Salvador.

The foreign ministers of El Salvador Hugo Martinez and Fernando Carrera of Guatemala have been in dialogue about the case of the mine, according to a statement last February by the Salvadoran official.

Escobar said the Salvadoran Catholic Church supports the issuance of new water and mining laws, pending in the Legislature for several months.

The church is "in favor of defending the argument of saying no mining exploitation" and hopes that a new law "will protect natural resources" of El Salvador, he added.

"It is not right with these resources are taken away and (...) while the cyanide, and a poisoned a nation are left behind" added the archbishop.

El Salvador has suspended mining projects by government decision, but environmental organizations and other sectors demand mining to be banned permanently by law.

Thousands of people hailing from different regions of El Salvador marched through San Salvador this morning to urge the government to stop metallic mining and to approve legislation to protect water in the country. 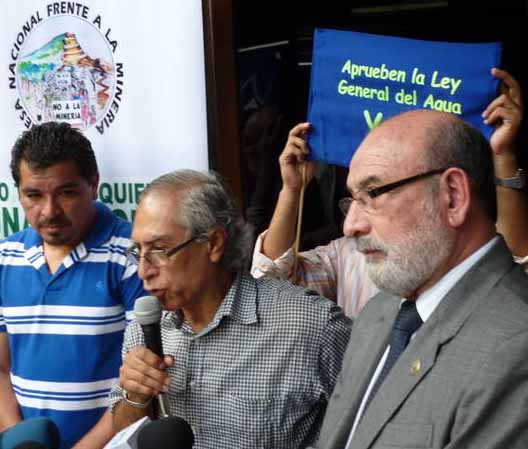 as organized by a coalition of environmental and religious organizations in commemoration of World Environment Day, WED - designated by the United Nations Environment Programme in 1973 to promote awareness on the importance of preserving our biodiversity and to find ways to take corrective action on issues related to climate change, environmental degradation and sustainability. WED’s theme this year focused on reducing the amount of food is wasted around the globe.

"This is not Cabañas," said Shandur Kuátzin Makwilkali, gesturing around the room and out the window at the wooded slope, but meaning the entire region of that name. He had been describing the growth of indigenous associations throughout this mainly rural department in northern El Salvador, adding: 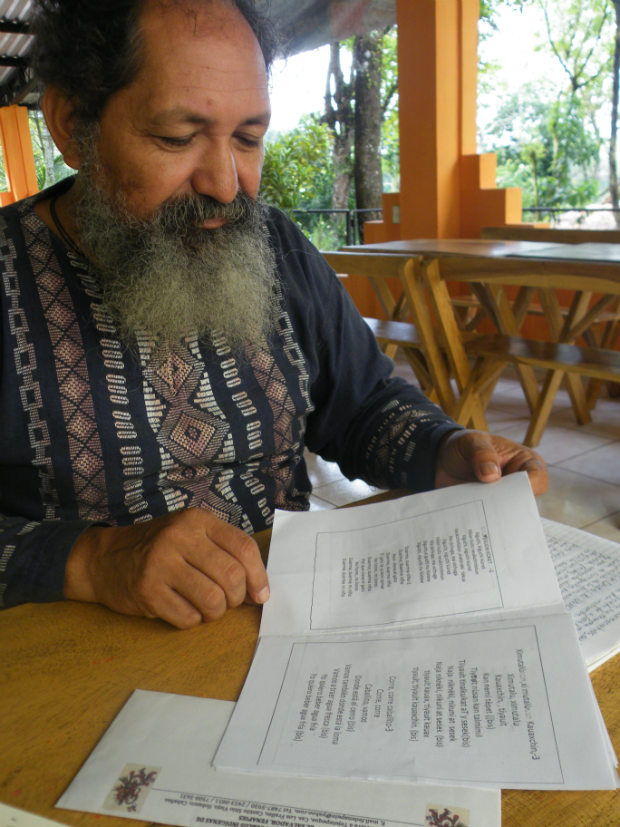 Shandur is President of the National Federation of Indigenous Peoples of El Salvador, which works to resuscitate the vitality of indigenous cultures in a part of Central America where they have been systematically and brutally suppressed. The challenge is significant:

"We don't have enough unity, solidarity", he laments, before returning to the positive: "But now we have a federation, present in 14 departments, with 10,000 members."

The Federation celebrated its first anniversary on 21 January this year. In addition to its remarkable growth, the indigenous movement has established a small University of the Indigenous Peoples of El Salvador, teaching four courses lasting for three and four years. Students can study courses in indigenous medicine, the Nahuat language, indigenous administration, and biculturalism.

Another development is the Cooperative Association of Savings, Credit, Consumption, Housing and Farming of the Nahuat-Pipil Nation. The Federation, University, and Cooperative make up the three branches of the movement that seek to mobilize, educate, and overcome the economic poverty of the indigenous communities.

According to Shandur an unequal distribution of land ownership limits how much can be accomplished in raising living standards, and the Government has been unwilling to engage in negotiations on the question of returning indigenous land.

Read the rest of the article here….

On September 15, 2012 women, men, young people and children yet again turned out for the IV Festival for Sovereignty and for “Our Human Right to a Healthy Environment” No to Mining!.  This festival, which was first organized in 2006, is a yearly event on September 15 that combines artistic and cultural activities including painting, dance, and special speakers and is held in the plaza in San Isidro.  People come from all over the municipalities of San Isidro, Sensuntepeque, Santa Marta, Victoria, Ilobasco as well as from other towns across Cabañas to sing together as one voice for life:  The activity is full of Salvadorans who unite to demand life in a healthy environment with peace and justice for everyone. 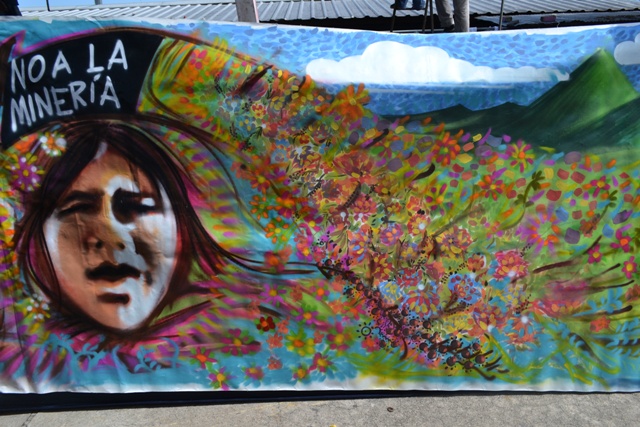 Since its beginnings, the goal of the Festival for Sovereignty has been to contribute to the resistance that defends life, water and the environment by educating and pulling together as many artists and organizers as possible.  The artists take advantage of this space to show their support for human rights through music, song, dance, art, and triggering emotions in defense of the environment.

The festival looks to promote and coordinate participation from different sectors of society in the community, all of whom are concerned about the levels of contamination and environmental deterioration and who demand respect and complete respect for human and environmental rights.  Along these lines, the whole population should work to preserve the ecosystem because it is the only guarantee for current and future life.  Year after year the Festival for Sovereignty has grown with the support of more people helping to plan, organize and participate in the event.

The Festival begins early in the morning with activities for children, like paintings about the environment and what they think nature is and what we should protect.  By using art we are able to educate and impress upon them positive outlooks towards the environment.

These types of cultural and environmental activities need to be constant until we are able to reverse the environmental problems that our country faces.  Environmental problems have classified us as one of the countries most vulnerable to natural disasters in the world. Because of our geographic location we are affected by a variety of natural disasters, especially the population located in vulnerable areas.  On a world level, El Salvador stands out as having 88.7% of its national territory as a “risk area” and for having the highest percentage of the population at risk.

El Salvador has been put into emergency situations due to the tectonic, volcanic and seismic activity which has brought about the loss of human life and economic setbacks.  Also, our environmental reality, which includes deforestation, global warming, demographic growth and water scarcity, has brought us to a critical point that threatens the lives of future and present generations.

We are facing a reality in which we need to organize ourselves to defend life, from every ideology and political party.  We have a commitment to resist and struggle against projects that bring death and are promoted with the only goal being to exploit strategic natural resources in our country.  Water resources are critical.  A number of reports have proven that 97% of the water in our country can be classified as  average to poor quality, and only 3% of our water can be classified as average to good quality.  This reality forces us to reflect on how we to revert the degradation to our ecosystems.  For this reason it is important to educate ourselves to defend water and life, both of which have been threatened by gold and silver mining projects in our municipality. 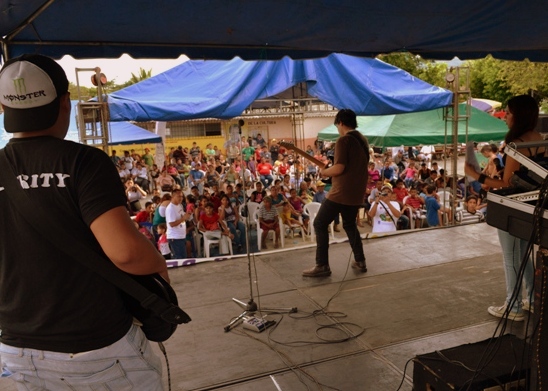 Gold mining projects have negative social and environmental impacts in communities.  Mining companies, like Pacific Rim, operate huge projects that deforest the area and use thousands of liters of water during the leaching process.  The water is contaminated with cyanide which later pollutes rivers, water tables, soil and the land where we plant corn, beans and vegetables.  This type of industry is a threat to the very life of the community.

Gold mining has negative social impacts on the communities because it promotes divisions among the population. Transnational corporations create conflict and terror that eventually breaks down the social fabric of the community.  They do not care about the wellbeing of the population, and instead only care about the economic profits they stand to earn. For this reason they do whatever it takes, including bribery in the communities and the government, as is the case with Pacific Rim.  This company has sued the Salvadoran government on the international level in the International Centre for the Settlement of Investment Disputes (ICSID), which is an institution of the World Bank based in Washington.  It is demanding $77 million, on top of the procedural costs which would wind up being up to $100 million, and would be paid by all of us for not allowing the company to contaminate our rivers.

The population of the Department of Cabañas, its children, its women and its youth have the right to a future.  The organizations promoting this festival and accompanying the people of the region, ADES and MUFRAS-32,  invite everyone to join the effort to reverse deforestation and loss of bio-diversity, and to reverse this reality.  Economic, social, cultural and environmental rights need to be respected.  Specifically, the authorities need to recognize and defend these rights.

We are witnessing an awaking in the social environmental movement, a movement that is willing to struggle and demand, in the first place, the end to neoliberal policies, but to also demand consistency, and more than an official discourse, demand a law that bans metallic mining.

We are sending a message to all of those who have the responsibility as well as the local and national authority to preserve and protect the environment and the rivers of our department from the threats of mining projects and the pollution resulting from large-scale hog farms.