The ICSID Rules the Pacific Rim Case will Continue

The ICSID Rules the Pacific Rim Case will Continue

As the clock ticked towards five pm on Friday, June 1st, the International Centre for the Settlement of Investment Disputes (ICSID) released its ruling in the Pacific Rim vs. the Government of El Salvador case.   For background on the case see here.

The ICSID tribunal  ruled that it did not have jurisdiction under Central American Free Trade Agreement (CAFTA) to hear the case because Pacific Rim had not been a U.S. company long enough to sue using that mechanism. However, the tribunal did consider the ICSID to have jurisdiction under Salvadoran Investment law.  Article 15 of Salvadoran Investment Law states that companies can sue the Salvadoran government through ICSID.  Therefore, the case will proceed to a third round of hearings.

As one source analyzing the decision put it:

This was not a decision about the content of the case or the issues of mining and water contamination in El Salvador.  This was a decision on whether the tribunal set up under ICSID has jurisdiction to hear the case at all.  Pacific Rim argued that it had two different legal on-ramps to the ICSID process, one under CAFTA and the other under El Salvador investment law.  The tribunal only needed to agree with them on one to let the case move forward and they decided to make it under El Salvador investment law.  The bottom line is that the investment rules and ICSID system has once again paved the way for a foreign corporation to menace people with millions of dollars in forced payments, in this case for the sin of pressing their government to say no to a gold mining operation that will contaminate their water and threaten the health of their families. 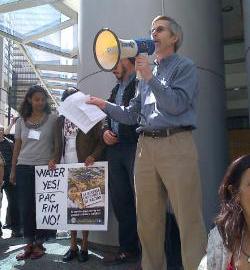 Public Citizen and Sierra Club responded to the decision in a press release saying “ The fact that corporate attacks on a sovereign country’s domestic environmental policy before a foreign tribunal would even be possible – much less cost a country millions when a key element of the attack is dismissed – highlights what is wrong with our ‘trade’ agreement model,” said Lori Wallach, director of Public Citizen’s Global Trade Watch. “These investor rules are an outrageous example of how ‘trade’ pacts have been stuffed with special-interest terms that empower corporate attacks on basic democratic public interest policymaking at home and abroad.”

The Institute for Policy Studies released their own statement where Director John Cavanagh said “The world should applaud the efforts of the Salvadoran people to safeguard their country’s long-term health and prosperity by becoming the first in the world to ban gold mining. Instead, this ruling is one more example of international investment rules undermining democracy in the interest of short-term profits for foreign investors.”  Spanish Version

From Canada, Mining Watch Canada covered the decision and said "The lawsuit has been and will continue to be costly. To date, El Salvador has had to spend at least $5 million of public funds in legal fees. Five million dollars could provide one year worth of adult literacy classes for 140,000 people in El Salvador or feed 60,570 families in temporary housing for a full two weeks during a natural disaster. One would presume that the small junior mining company has paid out a similar amount and one wonders how long its few remaining shareholders will hang on for the risky ride. "

The Committee in Solidarity with the People of El Salvador published their own press release saying, “This Investment Law is just like CAFTA and other so-called free trade agreements, in that countries like El Salvador must forfeit their own democratic processes in the name of attracting foreign investment, which is a hallmark of neoliberal economic policy.” Spanish Version

Oxfam American also showed their disappointment to the ruling in their press statement, “We are very disappointed by (ICSID’s) decision to rule against El Salvador. It goes against the views the Salvadoran people who are overwhelmingly against mining,” said Keith Slack, manager of Oxfam America’s oil, gas and mining program. “We are concerned that the continued presence of Pacific Rim in El Salvador will contribute to further human rights abuses. We urge Pacific Rim not to pursue this case and to listen to the voice of the Salvadoran people.”

In El Salvador, the ">National Roundtable against Metallic Mining held a press conference on Friday and issued a written statement on Saturday in response to the ruling. In their statement they highlighted the need for reforms in order to protect El Salvador from these types of attacks:

"[...]President of the Republic Mauricio Funes today, in his speech after three years of government, [...] referred reforms for some laws, among them the Investment Law.  We would like to call on the government to include the elimination of Article 15 in its proposals for reforms, so as to not continue being subordinate to ICSID jurisdiction."">Video of the Mesa’s press conference regarding the Pacific Rim decision

Somewhat surprisingly, the Attorney General’s Office is construing the decision as a success.  In a post on the AG’s website, it says “It was made clear that during the preliminary stages of arbitration, Pacific Rim was incapable of refuting the evidence presented by El Salvador…”  However, after review of the document, analysts in the U.S. and El Salvador alike coincide that El Salvador actually lost on three of its four main arguments, and that while the CAFTA claim was thrown out the case will continue essentially intact.

See here for all U.S., Canadian and Salvadoran Press Coverage

The Protest in front of Pac Rim Headquarters

At about 12:30 pm on Saturday, around 200 of organizers from El Salvador, Canada, the U.S., and all over the world who were participating in the "Shout Out Against Mining Injustice" marched about 6 blocks from the "Shout Out" to PacRim headquarters in the middle of Vancouver's mining and financial center to show their opposition to the Pacific Rim case and their outrage that the ICSID ruled that it should continue. For more information see here.