Marcelo's Legacy: The environmentalist who fought against metal mining in El Salvador 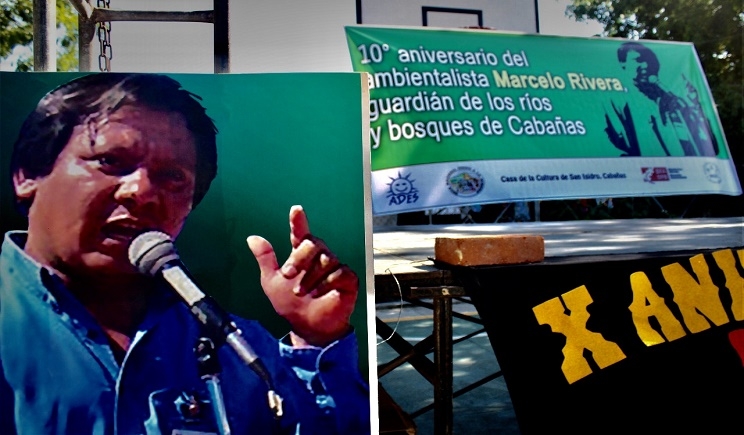 El Salvador is the first country in the world to ban metal mining in its entirety, in March, 2017; but who were the precursors of this victory?

It could be said that one of the biggest environmental victories in the world was won in a small country, which for many decades was classified as one of the environmentally worst, not knowing that within its lands there was a struggle to make it better. In 2017, the “pulgarcito”, as El Salvador is called, was recognized in every corner of the world for beating a large mining company, Oceana Gold / Pacific Rim.

Everything in this world has its genesis, and though it is true that the fight for the environment was a collective effort, we must recognize the heroes and heroines who gave their lives at a time of great threat, of metal mining, for our country. This journalistic writing is to remember Dora Sorto, Juan Durán, Ramiro Rivera, and Gustavo Marcelo Rivera, who were the first front line defenders in the department of Cabañas, El Salvador to plant the seeds for our fight and environmental defense.

Remembering was the key word of environmentalists and social organizations commemorating the tenth anniversary of the murder of human rights defender Marcelo Rivera, who launched the first cry against the OceanaGold/Pacific Rim mining company. Marcelo´s life was threatened for a long time, but he continued to organize the population not to be fooled by the mining monster, the dissatisfaction of the businessmen generated the disappearance of Rivera on June 18, 2009, his body was later found with multiple signs of torture on June 30.

Vidalina Morales, environmentalist and president of ADES (Association for the Social Economic Development, Santa Marta) points out the need to remember those who were the key to generating a fight against mining and also emphasized the need to continue to be vigilant, as mining transnationals are approaching the incoming government.

“Remembering the legacy of Marcelo who fought against metal mining, allows us to be vigilant for those companies that are out there, waiting for a way to come back. The fight has been strong in the department and in the country with the Metallic Mining Prohibition Law. But, within the new balance of power, the correlation of strength and transnational interests are aligning under a government that seems servile to the interests of corporations, and which basically has told them ´come, we are open´. This is a threat to our communities," added Vidalina.

The commemoration of the environmental defender, Marcelo Rivera, was accompanied by residents of the department of Cabañas, who offered cultural events in his memory, as well as a floral offering in the grave of the man who gave his life for the rivers and mountains of Cabañas.

While in the cemetery in front of the mausoleum, the director of the "Casa de la Cultura Marcelo Rivera", Flor Iraheta, could not contain her tears while she spoke about the need to ensure that the cultural and social legacy of Marcelo remains standing. "We want to commemorate the physical departure of our comrade Marcelo, we find it difficult to remember this date," said Flor Hirahetas, "we remember beautiful moments in our fight, he is not physically here, but his legacy is with us and we must fight for the environment and culture, we have people who remember everything he taught us, and we must teach it to the new generations. " She ended asking for an applause "that reaches heaven" for Marcelo Rivera.

Mining still does not stop completely.

The legacy of Marcelo Rivera, Dora Sorto, Juan Durán and Ramiro Rivera still lives in many people in the department of Cabañas and other sectors of the country who recognize their struggle, and subsequent murders due to the presence of mining corporations, managed to raise national awareness to stop the industry.

But, as environmental defender Vidalina Morales mentions, there is a latent danger in companies continue who want to return, with the invitation of a president (Nayib Bukele) who is committed to implementing a neoliberal economic agenda, and showed a rapprochement with international corporations whose interest are in the natural assets of El Salvador.

The representative of the Central American Alliance Against Mining, (ACAFREMIN), Pedro Cabezas, says that the threat of mining continues nationally and across borders. “There are risks, (over) in the economic measures the current governments is promising to take, and we must not forget that we need to determine who the intellectual authors of the environmentalists' death were. We have a mining ban, but cross-border mining remains an issue, there more than 40 mining concessions in the borders with Honduras and Guatemala and no step has been taken to dialogue with other countries to make a cross border water treaty to ensure the activities of those countries do not harm our environment.  The Cerro Blanco project, owned by Canadian  company Bluestone Resources, is already operating with dubious permits in Guatemala, the main concern is that the project is located 10 kilometers from El Salvador and that pollution would affect the Lempa River.