In Mining-Affected Communities, Water Is Becoming More Precious Than Gold 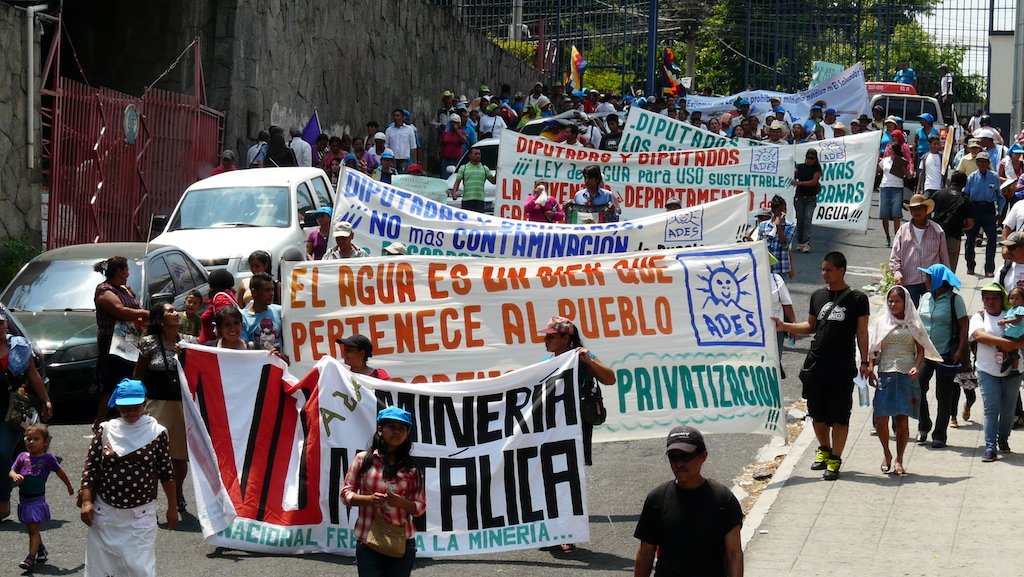 In what’s become a decade-long annual rite of spring, activists descend on Barrick Gold’s annual general meeting in Toronto April 25 to shine a light on the Canadian mining giant’s litany of abuses abroad. But this year the odds are slowly turning in the fight against the multi-pronged corporate assault of transnational mining companies.

Last month, El Salvador made history, becoming the first country to ban metal mining outright, after a World Bank tribunal rejected last October a US$250 million lawsuit launched against the government by Canadian-Australian miner OceanaGold. The suit, filed in 2009 by OceanaGold predecessor Pacific Rim, based in Vancouver, alleged loss of potential profits after the company failed to meet regulatory requirements to receive a mining permit.

Legislated limits have been imposed on metal mining elsewhere under pressure from affected communities and to protect ecologically and culturally important areas.

Costa Rica banned all open-pit mining in 2010. Mining is also outlawed in high-altitude wetlands vitally important to water supplies in Colombia. And at least half a dozen provinces in Argentina have passed bans on industrial-scale or open pit mining, as well as on various toxic chemicals used in mineral processing.

El Salvador’s prohibition goes further. It’s being noted throughout Latin America, where Canadian mining companies are increasingly casting their gaze, as a clear declaration by mining-affected communities that water is more precious than gold.

It was in the northern department of Cabañas, where safe water supplies are already scarce and vulnerability to the effects of climate change high, that Pacific Rim (which was later bought by OceanaGold) first obtained concessions for its proposed El Dorado project in 2002.

Local communities were quickly put off by exploration activities’ impacts on water sources – not to mention the company’s dealings with local landowners. As opposition grew, the discord sown by the company’s presence soon erupted in violence. A national movement against metallic mining in El Salvador was born with the formation of the National Roundtable Against Metallic Mining. The opposition found unlikely allies, includ-ing the archbishop of El Salvador, head of the country’s conservative Catholic Church.

Effective opposition kept Pacific Rim from meeting the regulatory requirements to obtain the permits it needed. In fact, it could not demonstrate that it owned or had land-owner consent to operate in the 12.75-square-kilometre area for which it was requesting a mining permit.

The company lobbied the central government to weaken its regulatory requirements.

But the company’s backdoor efforts failed. In response, Pacific Rim launched a US$250 million lawsuit with the World Bank alleging lost potential profits. Fighting that suit cost El Salvador US$13 million and threw a chill over the popular fight for a policy banning mining in that country.

Within months of Pacific Rim’s announcement of its intention to sue, community leader and outspoken mine opponent Marcelo Rivera was tortured and killed.

In 2013, OceanaGold rescued Pacific Rim from near-bankruptcy and continued with the suit despite broadband opposition to mining and plebiscites in five municipalities declaring themselves mining-free zones.

In October 2016, the World Bank’s International Centre for Settlement of Investment Disputes (ICSID) finally issued its ruling, finding that the company, as Salvadorans have long known, never met El Salvador’s regulatory requirements to obtain a mining permit. It ordered the company to pay US$8 million of the state’s legal fees.

Taking advantage of the ICSID ruling, a draft bill to prohibit metallic mining was tabled in El Salvador’s Legislative Assembly. A month later, the Catholic Church led a thousands-strong march in San Salvador to demand the bill’s approval.

OceanaGold would not let up, however, and launched a public relations campaign to persuade the government and the public that its project would usher in an era of “responsible mining.”

Central American University in San Salvador, home to outspoken scholars during the country’s civil war in the 80s, brought Governor Carlos Padilla from Nueva Vizcaya in the Philippines to testify before a legislative committee on the impacts of OceanaGold’s Didipio Mine there. Two Filipino community members involved in protests against the mine were murdered there in 2012. The mining operation was recently ordered suspended after complaints of water contamination, forcible and illegal demolition of homes, harassment of residents and violation of Indigenous cultural rights.

The day after Padilla’s testimony, 69 deputies out of 84 were present for the vote in the National Assembly. They all voted to pass a ban on metal mining.

The law awaits President Salvador Sánchez Cerén’s signature, which is anticipated any day.

However, the fight may not be over. It’s hard to say with certainty if OceanaGold will be so brazen as to launch yet another legal assault on the country. The ICSID has ordered the company to pay interest on the US$8 million owing to El Salvador. And the government has seized its assets. Still, it has yet to pay up and pack up, though it would be wise for the company to see that its greedy obstinacy has failed.

This article was originally published in NOW Toronto.