A blunt NO to mining in Arcatao, Chalatenango 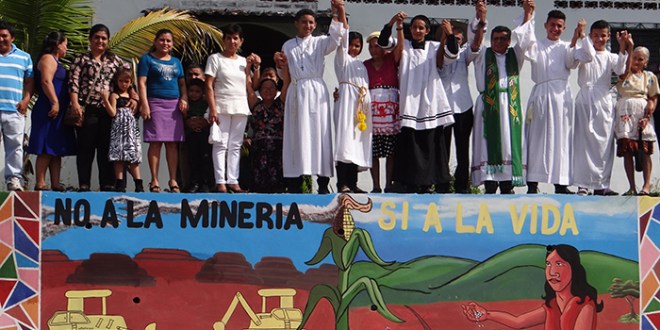 The rough and wrinkled hands of Santos Armendariz are a true reflection of his age and a life dedicated to the fields, without hesitation these marked "No" on the ballot for the referendum to "defend" against metal mining in the municipality of Arcatao, Chalatenango.

Santos comes from a small valley in the canton of Teosinte, Arcatao.  At 84 years of age and with health difficulties, he took most his time to approach a polling station to vote for the local government to issue a "Municipal Ordinance" prohibiting metallic mining in their municipality. "I came to vote because they (the mining company) will destroy the hills and leave me without home. For me this is not good because I will become homeless and without water, true? ... I can die shortly, but what about the little ones that are left" he reflected.

The echoes of a struggling people were not wrong, with 1027 votes cast on November 8, in the referendum to determine whether to permit for mining projects or not, 1023 people voted "No", only three voted in favor of this industry devoted to "extract precious metals in the world."

The local government of Arcatao installed nine polling stations through the municipality distributed among the cantons of the town: Pepeto and Portillo, with 3 ballot boxes; Teosinte and Sicahuite located in the the lower area of Arcatao 2 polls; Cerrón Grande and las Vegas another 2 polls. And the towncetnre was fitted with 2 polls for the neighborhoods of El Calvario, El Centro, San Jose and San Esteban, which allowed a consolidated 68% of the active voters registered in the system to vote residentially.

Arcatao has become the fourth municipality, with its neighbors San Jose Las Flores, San Isidro Labrador and Nueva Trinidad, to become an exclusive area that has decided to autonomously eradicate their territories from metal exploration and mining under municipal ordinances.

Canadian mining company AuMartinique entered the region in 2005, to explore Eramón mountains. This generated an immediate rejections from villagers and local authorities. The mere suspicion that pollution produced by this industry would annihilate life along the Sumpul River, the main tributary of the area and which extends along 77 kilometers of land, was unacceptable.

Protesters quickly closed ranks against the mining company and did not wait until the company had set up their operations, for now the Sumpul River runs quietly along the border of El Salvador and Honduras, working its way as a natural geographical boundary.

Jose Alberto Avelar, Mayor of the town Arcatao, congratulated the people for voting by majority and considered a brave civic act of sovereign will by the people against this transnational industry.

"It is important to mention that this was a commitment we made during the election campaign for city council  and now we are giving an answer to the population that has expressed through organized communities and the Consulta Steering Committee that  this land, that has precious metals in the ground, is completely protected" he said.

The mayor also considered that with the closure of mining activities in neighbouring municipalities of San Jose Las Flores, San Isidro Labrador and Nueva Trinidad, a chance for conservation of natural resources and for preservation of life for Salvadoran population has been afforded. "Here we are defending the life of everyone in El Salvador, we should mention that the population of San Salvador would be severely threatened if mining proyects were carried out, the aquifers that provide water the that capital San Salvador consumes are recharged in the hills of Chalatenango," he said.

Meanwhile, Dennis Orellana, representative of the Steering Committee noted that this collective decision was possible due to the commitment of those involved to take forward the process of the referendum. "The awareness of all communities in the municipality of Arcatao was strategic and that we worked together with organizations of the National Roundtable Against Mining on the possible effects and damage of this type of industry that only leaves behind destruction and threats to life, for the whole country" he said.

Yanira Cortez, Deputy Attorney for the Environment of Office for the Defense of Human Rights (PDDH) and observer of the referendum initiative congratulated the decision against metal mining using toold provided by the Municipal Code to allow citizens to decide on issues of transcendence in their municipalities.

"For the Ombudsman for the Defence of Human Rights is clear that the population has given a specific message and you must comply with it - and remember, all processes in which the Constitution of the Republic or international committments to human rights are not taken into account, will in the end be deemed irregular and will lack any validation".

As for the actions of transnational mining companies, Attorney Cortez said when requested information typically provide it in a biased manner, therefore it was important that sovereign commitments made by the Salvadoran State were in full compliance. "The referendum is the voice of the people and such collective actions streghten democracy to make decisions as banning mining. The referendum is not only a vote "per se" is the expression of a people who decide on their future," she said.

"What is happening against mining in the north-eastern area of Chalatenango is very important, we are generating a political, public and legal position," said Bernardo Belloso, CRIPDES, an organization within the National Roundtable against Metallic Mining , while explained the social impact of this democratic exercise.

"By declaring these territories free from mining we take a very important step because those who take the lead and are involved in this process of popular consultation are the communities which for more than 4 months went to work with all people to their right to decide, "he reiterated.