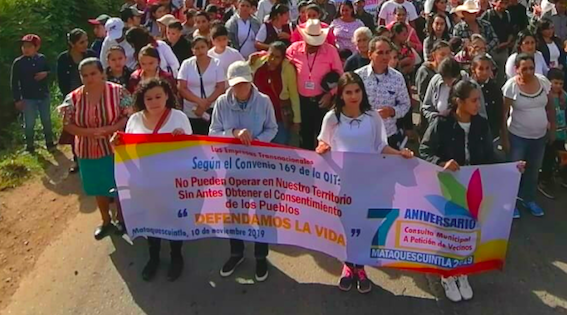 In the wake of a shooting attack, death threats, and fear of further violence against members of the peaceful resistance to Pan American Silver’s Escobal silver mine in Guatemala, nearly 4,000 people are calling on the Vancouver-based company to halt all community activities in the Central American country.

In mid-April, activists delivered a petition to Pan American Silver urging the company to respect the Indigenous Xinka people’s right to be freely consulted without violence and threats, and to immediately cease interference in their communities. Indigenous leaders such as Secretary-Treasurer of the Union of British Columbia Indian Chiefs Kukpi7 Judy Wilson and Winona LaDuke, former UN Special Rapporteurs Michel Forst and Victoria Tauli-Corpuz, and influential authors Noam Chomsky and Naomi Klein signed the petition.

The petition underscores standing concerns from Xinka communities that Pan American Silver’s ongoing community relations activities are acts of bad faith that threaten the integrity of a court-ordered consultation process and put their security at risk.

Pan American Silver’s Escobal mine has been suspended since June 2017, first as a result of direct community action and then by court order for discrimination and lack of prior consultation with the Xinka people.

Most recently, on April 14, unknown assailants fired shots at the home of one of the Xinka representatives elected to participate in the consultation. This follows a January attempt on the life of community leader, Julio González, as well as death threats against community members.

Even though Pan American Silver is not currently extracting minerals at the Escobal mine, it continues to operate in Xinka communities. According to its 2019 Sustainability Report, the company is “engaging with community leaders, government agencies, and NGOs.”

In September 2020, the company announced the launch of a “participatory monitoring program” in the municipality where the mine is located. In response to a letter sent to Guatemalan authorities and signed by nearly 200 organizations concerned over the recent attacks and threats against defenders, Pan American Silver wrote that it continues “community relations activities to respect any existing commitments…”

While such community activities may seem innocuous to an outside observer, the Xinka Parliament of Guatemala and the peaceful resistance movement has decried the company’s community work as coercive, in violation of the “free” nature of the consultation and the Constitutional Court suspension order, and a main driver of increased tension and violence. In their joint statement in October 2020 with the Ministry of Energy and Mines – the authority responsible for the consultation process – officials agreed to inform Pan American Silver that the Xinka consider the company’s activities to be acts of bad faith that threaten the integrity of the consultation. Nonetheless, Pan American Silver has so far failed to acknowledge and act in response to Xinka demands that the company suspend all community relations activities to do its part to preserve their right to freely and safely participate in the consultation process.