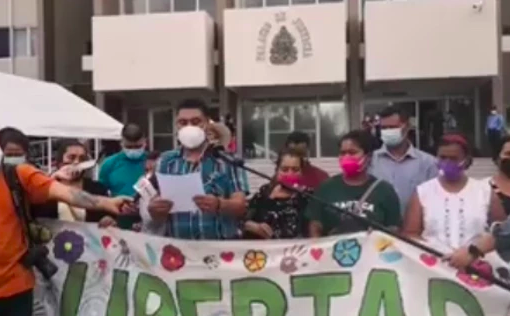 After finding that the detention of the eight Guapinol defenders imprisoned for more than 17and 26 months is arbitrary, the UN Working Group on Arbitrary Detention urges the Government of Honduras to "release the eight defenders immediately" and to grant them the effective right to compensation and reparation. The Group further called on the government to "conduct a thorough and independent investigation" into this arbitrariness and to take action against those responsible for it. In addition, the Group asked the State of Honduras to disseminate this opinion "by all available means and as widely as possible".

The Working Group(WG) is a specialized body of the United Nations, composed of five independent experts from different regions of the world, authorized by the UN Human Rights Council to investigate cases of detention imposed arbitrarily or otherwise inconsistent with international human rights law.

In accordance with its mandate, the WG carries out its task with discretion, objectivity and independence, and under all the criteria studied, it found that the detention of the eight environmental defenders is arbitrary for three reasons:

2. Second, the Working Group found that the detention is arbitrary as it constitutes a reprisal for the defenders' legitimate exercise of their rights to freedom of movement, equality before the law, freedom of expression, freedom of assembly and association, and freedom to participate in public affairs. In other words, the detention is arbitrary because it is a measure designed to prevent the community from defending its resources and rights.

3. Third, the Panel found that "there is no basis to justify the trial". In addition to the fact that there is no justification for advancing the trial, the defenders have been prosecuted by a court that "has not responded to the frequent requests for appeal and habeas corpus" filed by the defense.

The WG urges the State to compensate and redress the situation and to investigate the responsibilities in these abuses. It should be noted that, given the seriousness of the allegations in this case, the WG submitted information on the facts for further study by the Special Rapporteur on the Independence of Judges and Lawyers and the Rapporteur on Torture and Other Cruel, Inhuman or Degrading Acts for evaluation.

The State of Honduras has made an international commitment to comply in good faith with human rights standards, including those set forth in the International Covenant on Civil and Political Rights. Therefore, the State must immediately adopt the measures made by the Working Group. The release of the eight human rights defenders should be pursued without delay and ex officio by the State. The authorities should not, and cannot, wait for the defense to file appeals to request the release. In fact, the time that elapses between the notification of the ruling and the release may be considered as another violation of international law.