Ruling Rejected in the Case of Murdered Environmentalists

Ruling Rejected in the Case of Murdered Environmentalists 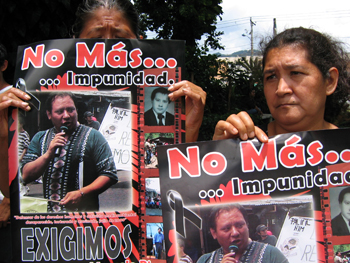 The legal process that lead to the sentencing of six people accused of the murders of five environmentalists in the town of Trinidad, Sensutepeque, Cabañas, was manipulated and lacking diligent investigation, said Francisco Pineda, the President of the Environmental Committee of Cabañas (CAC).

“We express our rejection of the decision of the Specialized Sentencing Court in San Salvador, with regards to the deaths of the environmentalists from Cabañas.  From the beginning we have denounced the Attorney General’s hypothesis, which was that personal feuds caused these crimes,” he said.

The environmentalist affirmed that before the arrival of the company Pacific Rim to the area, there were disagreements between families; however, it wasn’t until the Canadian corporation began to buy loyalties and rally against those that opposed the mining project that the murders began.  In 2009, Ramiro Rivera and Dora Alicia Sorto were murdered, the last of which was eight months pregnant.

The crimes were widely denounced and, according to the CAC, the only reason for the crimes was to silence environmentalists.  Previously, Marcelo Rivera, a community leader that also opposed the mining project, had been murdered.

“We also observed, with concern, the interest of the Attorney General’s Office in exonerating these people, it seems that they said ‘they didn’t do it’ without investigating what happened,” added Ricardo Navarro, from CESTA.  Five of the accused were set free.

Ramiro Rivera’s brother, Santos, denounced that, when he went to testify against the accused during the judicial process, he was pressured by the Attorney General’s office and they tried to intimidate him by threatening to incarcerate him if he testified.

Pineda, who condemned these actions, recognized the commitment made by the President of the Republic, Mauricio Funes, who has condemned the murders but questioned the conduct of some of the government institutions, as in the case of the San Francisco El Dorado School, in the town with the same name.

Employees from the school accepted financing from Pacific Rim to build a wall around the perimeter of the building; and in that context, Graciela Funes, a mother who opposes mining, called into question the project that tied the community to the company.   The response that she received was she was threatened for not supporting the construction project.  In addition, teachers and parents from the town assaulted her, claims Pineda.

He emphasized that schools are part of the Ministry of Education and therefore subject to the government.