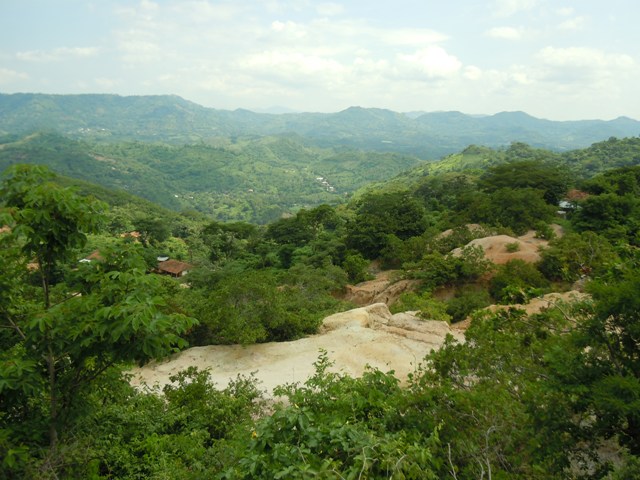 A Brief History of Mining in El Salvador

Metallic mining was carried out in the northeastern part of El Salvador for almost 100 years (1880-1970) and in the department of Cabañas during the 1950s.  Mining activity, even though it came to represent 15% of the exportations in 1903 and 16% in 1913, was never a significant contribution to real development.  What it did cause-even when there was not intensive exploitation-was environmental damages that have lasted until today, where the San Sebastian River, in Santa Rosa de Lima (La Unión) is the most emblematic case.

Towards the end of the last decade of the past century, a new mining boom lead to the rise of the price of gold which brought extractive industry companies from Canada, the U.S., England and Australia to Central American.  In El Salvador, the current Mining Law, passed in 1995, allowed Pacific Rim, Martinique Minerals, Minerales Morazan, among other mining companies to come to El Salvador between 1998 and 2003.  These corporations obtained a total of 29 exploration licenses given by the Ministry of the Economy.

In 2005, Pacific Rim presented its Environmental Impact Study for the El Dorado project, in San Isidro (Cabañas), and applied for an exploitation permit.  The Ministry of Environment and Natural Resources denied their permit for not having fulfilled all the requirements.  This decision was made possible thanks to issued about the environmental, social and economic impacts of mining raised by the National Roundtable against Metallic Mining; the resistance from the affected communities as well as to statements opposing mining from the National Development Commission, the Episcopal Conference of El Salvador and the other important national figures.

Mining Conflict and the Murder of Environmentalists

To overcome resistance to its projects, the mining companies bought off local government and municipal officials, religious representatives, community leaders and inhabitants, by financing projects, jobs, gifts and bribes.  This created divisions and conflicts between families, neighbors, neighborhoods and communities, between supporters and those who opposed mining.  The violence in Cabañas that has already taken six lives- among them those of three environmentalists:  Marcelo Rivera, Ramiro Rivera and Dora Sorto- is due to the presence of Pacific Rim, as was recorded by the Sentencing Judge of Sensuntepeque on April 15, 2011.  In 2011, Juan Francisco Ayala Duran, member of the Environmental Committee of Cabañas, was also killed after participating in some activities against metallic mining in that Department.

The Pacific Rim and Commerce Group Suits in the ICSID

In March of 2009, when the elected president Mauricio Funes ratified the decision of the prior government not to allow any mining projects, Pacific Rim carried through with its threat to sue the Salvadoran government in the International Centre for the Settlement of Investment Disputes (ICSID).  The U.S. company Commerce Group also wants $100 million for having their exploitation permits revoked in La Unión.  These suits invoke provisions in the Dominican Republic-Central American Free Trade Agreement (CAFTA), especially the  “indirect expropriation” mechanism, which refers to an action or omission by a government that affects investment.

Like the prior government, the current government has refused to push a law that would ban mineral exploitation because –according to President Funes- his verbal commitment is enough to stop those projects.  However, in February of 2010- during the activities for the inauguration of the school year in Sensuntepeque- he promised to back legislation that would ban mining, if the Parliament approved it.    For that reason the National Roundtable against Mining proposes that Legislative Assembly representatives reexamine the bill presented towards the end of 2007 that would adequately regulate non-metallic mining and definitively ban metallic mining.

The Government, through the Vice-ministry of Environment and Natural Resources, announced in October of 2011 that it would evaluate the possibilities of a Moratorium on exploitation permits for metallic mining in El Salvador.  The delay in the results of this Strategic Environmental Assessment- promised to be released by June of 2011 and which have still not been released-contributes to the presence of mining companies in the country.  This, tactically, allows for a moratorium when there has been no official response from the government authorities such as the Ministry of the Economy, Environment and Natural Resources and the Secretariat of Strategic Affairs of the President’s Office.

New Trade Agreements that could Give Way to Metallic Mining

There have been certain conditions created in public policy that could allow for new opportunities for those who promote metallic mining.  The latest phase of negotiations for a Free Trade Agreement with Canada, as well as the news of the “Public-Private Partnerships” whose most visible implementation is the “Partnership for Growth” with United States, represent an emphasis on investment that could drastically exacerbate the vulnerable environmental conditions in the country, which have already been documented by the United Nations in 2010.  The concessions contemplated in the Public-Private Partnership Bill could privatize goods and natural resources like water, the subsoil, energy sources, etc.

The trade agreement that the Salvadoran Government wants to sign with Canada implies a relationship to mining, because current trade transactions between the two countries don’t surpass $16 million and don’t represent a necessary market for either of the countries.  However, taking into account that 4.1% of the gross domestic product of Canada is made up by mining and that said country has 30% of the world market of the industry, possible signing of the Free Trade Agreement could open up possibilities for Canadian transnational corporations to take the precious metals from the Salvadoran subsoil.

Environmental organizations and Catholic churches in El Salvador and Guatemala have become alerted to the damages that the Cerro Blanco mining project, a Goldcorp subsidiary, in Asunción Mita, Jutiapa (Guatemala) would cause El Salvador.  The mine, located 18 km from Metapan, could contaminate the Lempa River due to its subterranean connection to the Guija Lake, which would receive cyanide waste, heavy metals and acid drainage from the Ostúa and Angue Rivers.

The ratification of a law that would ban metallic mining has been conditioned in the short term by the mayoral and legislative elections in March of 2012.  They represent a scenario that could change the correlation of political powers in the Legislative Assembly, and possibly a new scenario for passing the bill that would ban mining. In the same way, the electoral struggle could make the issue of mining invisible and focus the efforts of candidates, as well as the voters, on other problems.

Approval for the Law

The most urgent fundamental action, without a doubt, is passing a law that bans mineral exploration and exploitation definitively.  The Executive Branch should take the imitative, but also the Legislative Assembly can provide the political will for the President’s Office.

The government should demand its rights to sovereignty and self-determination that justify its decision to reject projects that would damage the ecosystem, productivity and life.  It should show that the Pacific Rim is an aggressor who is painting itself as a victim, and that it is the government that should be suing the company for environmental damages and the conflict in Cabañas.  Confronting these suits means revising CAFTA, not entering into more trade agreements that favor corporations over the country-more than anything the trade agreement with Canada which is 85% negociated, all in secret-, rethinking participation in the ICSID and changing the Investment Law.

The threats, attacks and murders resulting from conflict caused by mining in Cabañas have been left in impunity.   This could create new crimes.  Because of this the public prosecutor, and political and judicial institutions should immediately take action against the intellectual and material authors.

Prevent mining in Guatemala and Honduras from Affecting El Salvador

Banning metallic mining in El Salvador would not be enough to save the country from the dangers of this harmful industry, if Guatemala and Honduras develop extractive projects near the borders.  President Funes should advocate with the Guatemalan president Otto Perez Molina to revoke the permits for the Cerro Blanco project.  Regional integration cannot leave out environmental components, given the proximity and interconnections between El Salvador, Guatemala and Honduras’s land, water systems and populations.

Make the Issue of Mining Political

The issue of metallic mining should be made into an issue that demands solutions and urgent efforts on the part of decision makers in government positions, political parties and, finally, the Legislative Assembly.  That is why creating public opinion and making a map of all of the social actors or public figures who favor a law that bans metallic mining and reject mining projects is strategic in the short term.

From the National Roundtable against Metallic Mining in El Salvador