'Let Us Care for Everyone's Home': The Catholic Church's Role in Keeping Gold Mining Out of El Salvador

A recently published essay by Phd candidate Rachel Nadelman looks at the role of the Catholic Church in the anti-mining struggle in El Salvador. 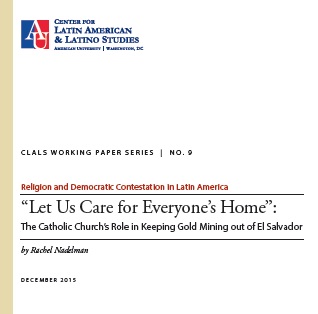 "A majority of Salvadoran citizens and political leaders alike are opposed to mining, citing the country’s environmental degradation, population density, and limited water resources. Yet opposition to industrial gold mining has not always been the majority position in El Salvador. As recently as the early 2000s, the Salvadoran government, with support from international donors and creditors, pursued metals mining as an opportunity for economic growth. The story of how El Salvador diverged from this extractivist path is multi-faceted. A key element has been the strategic involvement of the Salvadoran Catholic Church. This working paper explores the Church’s influence on the Salvadoran government’s decision to suspend all metals mining. The analysis examines the theological and practical motivations for the Church’s stance on mining. It also describes the strategic actions taken by the Church to promote its position. Ultimately, the involvement of the Catholic Church served to strengthen the grassroots anti-mining movement, to shape the public debate, and to sway the electorate, which proved decisive in the suspension of all industrial metals mining in this country." DOWNLOAD THE STUDY HERE