Most arguments presented by applicants against CAFTA on national sovereignty and social justice were not accepted by the Constitutional Chamber of the Supreme Court.

Nine years after the first challenge was launched, the Free Trade Agreement between the US, Central America and the Dominican Republic (CAFTA-DR) was virtually declared constitutional by the Constitutional Chamber of the Salvadorean Supreme Court, except for two articles, one that banned El Salvador from issuing patents and other that automatically ratified the International Convention for the Protection of New Plant Varieties.

The ruling, issued yesterday and signed by all five magistrates, indicates that the two articles declared unconstitutional took away power from the legislature to ratify international conventions or abolish existing laws, referred to in Articles 86, paragraphs 1 and 2, 131 section 5 and 7 and Article 146 of the Constitution of the Republic.

Reform to article 15 of the Invesment Law: Assertive legislative action

Last week the Legislature of El Salvador amended the Investment Law so that disputes between foreign investors and the state are settled in local courts before going to arbitration bodies such as the International Centre for Settlement of Investment Disputes (ICSID ).

The reform, which has gone unnoticed even by social movement organizations that reject the demands of transnational corporations in the ICSID, is of prime importance because it returns a hint of the country's sovereignty, sovereignty tainted by free trade agreements, bilateral investment agreements and by the Investment Act itself.

The Economic Commission of the Legislative Assembly agreed today to issue a Favorable Resolution to amend Article 15 of the "Investment Law" which relates to the settlement of disputes.

The Members of the Legislative Assembly who are part of the commission reached a consensus to delete three subsections of the current regulations and established that "if disputes or differences which may arise between domestic and foreign investors and the state, regarding those investments, made in El Salvador, the parties may appeal to the competent local tribunal, according to current legislation and legal procedures."

These reforms aim to give confidence to the country, create more employment, and to make it more attractive in the area of ​​investment and development.

The President of the Commission, Eduardo Barrientos, said: " we cleaned up Article 15 and now propose that the differences between local and foreign investors may be resolved here in the country, with local law, only as a last resort may these disputes be resolved by international mechanisms".

Moreover, the Member of CD Parliamentary Group, Douglas Aviles, said that "what we have done is to bring legislation in line with the recent Association Agreement with Europe, reforming Article 15 and including an aspect relating to the settlement of disputes which provide that any controversy that is not under a treaty or agreement will be adjudicated through local legislation."

Finally, the FMLN Parliamentary Member, and Secretary of the Commission, Blanca Coto, said: "This day we have strengthened the legal framework, we have given further support to the Government of the Republic of El Salvador for the defense of the interests of Salvadorans, in light of disputes that may result in corporations launching law suits against the Salvadoran state.

Tuesday's session was attended by representatives of the Ministry of Economy.

The Favorable Resolution and the relevant draft decree may be submitted for approval by the plenary Legislative Assembly on Thursday.

Studies have shown that there is cyanide, iron and other heavy metals in the water

The original in Spanish can be found here

A team of specialists, made up of seven people, will investigate the cause of the cyanide and iron pollution coming from the San Sebastian gold mine (Santa Rosa de Lima, La Unión), with the goal of identifying those responsible for the pollution.

“We should not only carry out studies that look at how far-reaching this is, but also that identify actions to mitigate these effects in order to call for some measures from those responsible,” said Lina Dolores Pohl, the Vice-minister of the Environment and Natural Resources (MARN in Spanish). 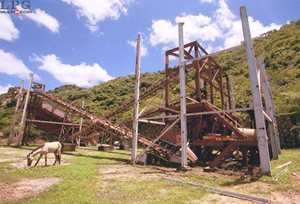 The backyard mining at the San Sebastian mine still holds the attention of the Vice-minister, after having received complaints about the pollution whose main sources is a rust colored acidic discharge that comes from the slope of the Cosigüina Mountain, where there was industrial mining for decades.

According to Pohl, the causes could originate either from the industrial mining formerly carried out by Commerce Group or by the backyard mining that is currently being done by hundreds of people that poses a risk to personal safety, including that of minors, by using explosives.

Studies carried out by the Center for Investigation of Investment and Commerce (CEICOM) in the area have determined that the water and soil are contaminated with aluminum, zinc, lead, arsenic and cadmium.

“This goes beyond the capacity of the ministry,[but] we have funding to establish a work team that will do these studies which in turn will help us clarify who is responsible so that we can act and resolve the problems in the area,” added the government official.

The funding, which totals $10,000, comes from aid given by the Republic of China (Taiwán) for environmental investigations at the MARN.

Pohl recognized that dealing with these problems is complicated, because the whole community’s source of income is the mine.

Mining for Gold: A “Pact with the Devil”?

Mining for Gold:  A “Pact with the Devil”?

The economic crisis—and the rising price of gold—have spurred North American firms to reopen mines and attack environmental regulations. Here’s what we can learn from El Salvador’s moratorium on new mining permits.

“The water‘s bright orange,” we exclaim while balancing ourselves precariously on rocks alongside a spring. We are visiting the community of San Sebastian in the province of La Union in the northeast corner of El Salvador. Above us stands a mountain with a prominent slash where U.S. and other firms mined gold for over a century, a mountain that also happens to be a key watershed for this area.

“I’ve seen this water also cranberry red and also bright yellow,” our companion responds. But then she quickly adds: “Remember: don’t touch the water. Last time I was here, I slipped and ended up with rashes all over my leg and stomach where I got wet.” She doesn’t need to remind us. Experts from the Salvadoran government’s Ministry of the Environment and Natural Resources were here in July 2012 and they found levels of cyanide and iron that were through the roof.

What at first seems odd is that there hasn’t been commercial gold mining here for at least a decade—since the U.S. company Commerce Group left. But, as we learn on this, our second, research trip  to El Salvador, a decade or two can be a blink of an eye for the environmental havoc wreaked by gold mining.

These ancient mountains contain not only gold and many other minerals, but also sulfide. It is a deadly combination with long-term consequences: once the mining excavations expose sulfide to the air and rain, it is converted to sulfuric acid. With each new rain, the acid unleashes new toxic substances down the mountain and into the springs and streams. In a nutshell: a long-term poisoning of the water, the land, and the people.

The now-orange spring water flows into a now-lifeless stream that flows into the San Sebastian river that, in turn, flows into the Santa Rosa river. Along the way, the water is used by many before it enters the Gulf of Fonseca far to the south and continues its journey.

The technical term for the environmental nightmare that is unfolding in front of us is "acid mine drainage.” Acid mine drainage has plagued mine sites from Pennsylvania to El Salvador for centuries.  Mining expert Robert Goodland stresses that some communities near ancient Roman mines in England and Spain continue to suffer the effects of acid mine drainage over 2,000 years after the mines were closed. And remediation—or “clean up”—is technically and financially challenging. As a local college student who has studied the situation here explains: even if the funding were available, “we wouldn’t be able to clean this up even in 100 years.” 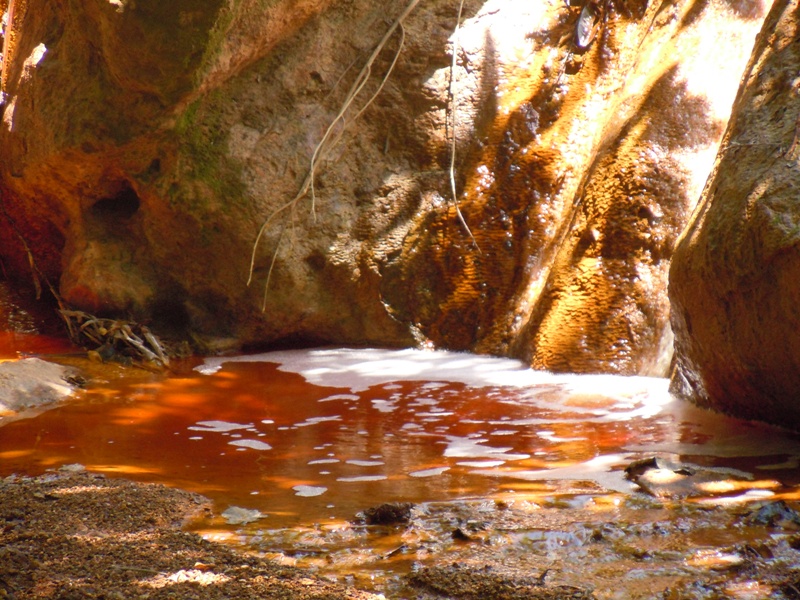 El Salvador loses on three out of four counts, as anti-environment and anti-development case launched under CAFTA drags on

El Salvador loses on three out of four counts, as anti-environment and anti-development case launched under CAFTA drags on

El Salvador lost three out of four of its major arguments in last Friday’s Pac Rim Cayman LLC v. El Salvador jurisdictional ruling. Even though it narrowly won dismissal of its CAFTA case, the underlying claims will proceed at World Bank-based hearings as a challenge under El Salvador’s domestic Investment Law.

-El Salvador lost on three out of four counts, and Pacific Rim's attack on El Salvador's mining policies will proceed. The government may still have to pay millions in tribunal and legal costs for the portion that was dismissed.

-Government actions that predate CAFTA - but continue after it went into effect – can be a "continuing omission" that can keep governments on the hook years later. In this case, Pacific Rim's mining permit was presumptively denied before CAFTA went into effect, but the firm and the government continued to discuss it and the permit remained not granted to date. Following this logic through, a company’s failure to meet a regulatory requirement in the year 1800 can constitute a “continuing omission” attributable to the government (as if it were a contract) for centuries to come, provided the government is nice enough to continue to talk about it.

-The dismissal of CAFTA jurisdiction was on worryingly narrow grounds: had the firm reorganized its corporate structure so that its pre-existing U.S. corporate entity obtained ownership of the Salvadoran mining interest (rather than Pacific Rim's Cayman subsidiary that owned those assets being reincorporated as a new U.S. entity to pursue the CAFTA case), El Salvador could have been held liable for a CAFTA violation on the basis of a dispute that actually started before CAFTA, just because the governmental authorities were kind enough to keep speaking to the company about their permits.

-Through this narrow dismissal of the CAFTA complaint, the tribunal practically laid out a road map for future aggressive nationality planning companies to abuse the investor-state system to attack environmental policies.

To read the rest of the article