Ben Smith : Behind the Numbers 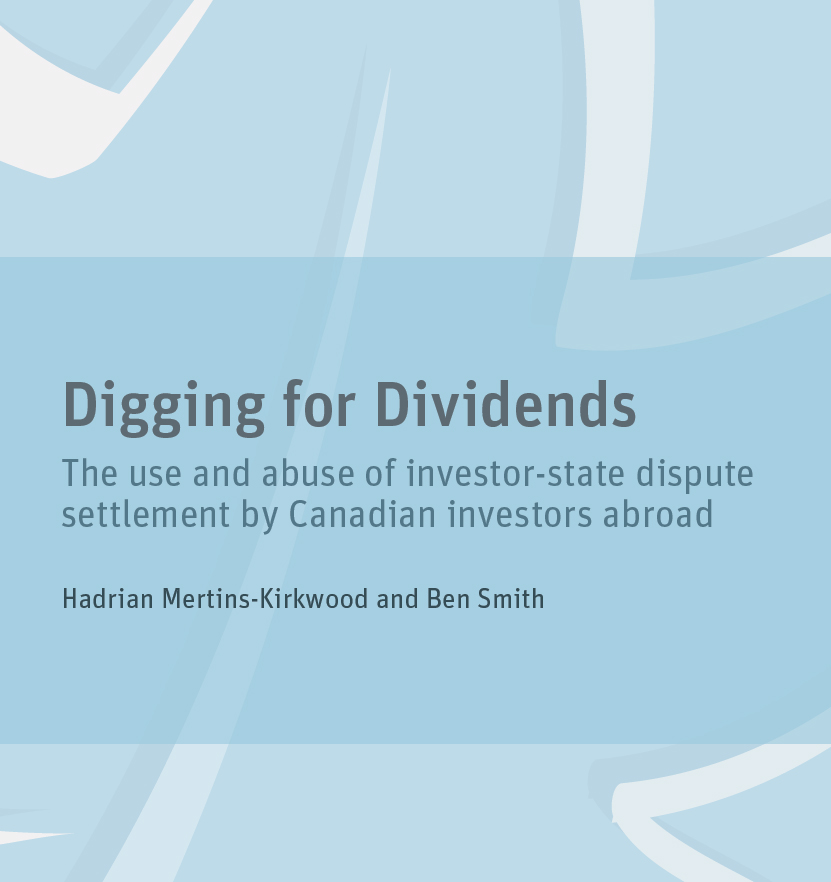 (DOWNLOAD THE STUDY HERE)Of the limited changes made to the renegotiated NAFTA agreement—also known as the USMCA—perhaps the most significant relates to the system of investor protections that permits foreign firms to challenge government policies, laws and court decisions through private arbitration.Under the USMCA, this investor-state dispute settlement (ISDS) system will no longer apply to Canada, and only a limited version will remain in place between the U.S. and Mexico.

The overdue removal of ISDS from NAFTA is rightfully being celebrated by Canadians. Even Canada’s foreign minister said the removal of ISDS “strengthened our government’s right to regulate in the public interest, to protect public health and the environment.”

Outside of North America, however, the story is different. Canada is still part of dozens of economic agreements that include the ISDS system. As our new report, Digging for Dividends,shows, Canadian investors have frequently used the ISDS system to pursue their commercial interests abroad—too often to challenge responsible government policies taken in the public interest in developing countries.

A common narrative runs through many of these cases: a Canadian mining company uses ISDS to challenge the environmental policies of a developing country over their alleged harm to its investment. For example, rulings by the Colombian Constitutional Court to protect wetlands that are the source of the country’s precious freshwater have triggered a spate of ISDS claims under the Canada-Colombia Free Trade Agreement. These, and similar cases, have sparked growing concerns over the ability of governments in the Global South to act decisively on serious environmental issues such as climate change.

In other words, in order to take meaningful environmental action, many of the countries most affected by climate change must navigate their way through a gauntlet of private-sector actors with exceptional power and resources to assert their commercial interests. Canadian firms have already been awarded US$4.4 billion in compensation through this system.

Among the several important findings we highlight in the report, one concerning issue relates to the growing involvement of the financial industry in backing ISDS disputes. Through so-called third-party financing (TPF), hedge funds and specialized financial firms—mostly based in New York and London—are encouraging, sustaining and bolstering investment disputes, which is tipping the scales of ISDS even further in favour of multinational corporations.

In practice, TPF is a fairly straightforward process. Investors will outsource the legal costs of their ISDS claim to a financial firm, who in return receives a portion of the compensation if the investor’s claim is successful. In other words, third-party funding has commodified the ISDS system, assigning value to legal challenges made against national governments.

In our report, we find evidence of seven ISDS claims involving Canadian investors that use this financing scheme. However, given the highly secretive nature of ISDS in general and TPF specifically, the extent of third-party funding among Canadian investors is likely much greater than the handful of cases we identify.

Some new evidence suggests that the international arbitration community is starting to take the TPF issue seriously. According to attendees at the latest meeting of the United Nations agency that has a central role in designing ISDS rules, third-party funding was one of several key issues under discussion. This comes several months after the International Centre for Settlement of Investment Disputes published a working paper that proposes several reforms with respect to TPF.

Tackling third-party funding will not resolve the many other outstanding problems with the ISDS system, but it is essential that this shadowy financial market is exposed to the light of day. Otherwise, affected communities will remain blind to the powerful figures that have profited at their expense.

Among other policy recommendations, our report supports the need for greater transparency in the use of TPF. Holding these financiers to account, however, is just one small step towards rebalancing the scales of the global investment system away from litigious multinational corporations and toward the broader public interest.

Ben Smith is a MA student in the Department of Political Science at Colorado State University and the co-author with Hadrian Mertins-Kirkwood of Digging for Dividends.