On Tuesday, December 9, 2008, Pacific Rim Mining Corporation, a Vancouver based mining company, issued a press release announcing that the company has filed a Notice of Intent (NOI) to arbitrate against the Salvadoran government under the Central American Free Trade Agreement (DR-CAFTA).

On April 30th, 2009 the mining company officially filed arbitration in the International Center for Settlement of Investment Disputes (ICSID), an arbitration mechanism of the World Bank based in Washington D.C. Pacific Rim claims the Salvadoran government's failure to issue an extraction permit to the company for its El Dorado project is a violation of their rights as a foreign investor under DR-CAFTA, and has cost the company significant financial losses. Pacific Rim declares to have invested $77 million during its gold exploration in El Salvador, and argues that the company is entitled to an extraction permit. 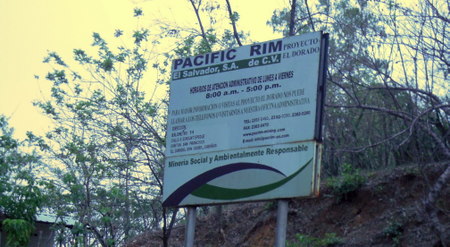 Pacific Rim filed an Environmental Impact Study with the Salvadoran Ministry of Natural Resources and Environment (MARN) in September 2007, in its bid to secure a mining extraction permit for its El Dorado mine project in San Isidro, Cabañas in the Northern Zone of El Salvador. Pacific Rim claims to have met all the concerns expressed by the MARN, and that the Salvadoran government's refusal to grant the extraction permit is in violation of their rights as investors under CAFTA.  However in his report on the Pac Rim case, Dr. Rick Steiner explains that Pacific Rim had failed to meet a number of requirements to be eligible for a permit, and the Environmental Impact Study alone was not sufficient for a permit to be granted.

Pacific Rim has shown that it is willing to manipulate trade law to ensure a favorable outcome. The example of this being that Pacific Rim as a company is based in Vancouver, Canada, but Canada is not a signatory in DR-CAFTA. In order to get around this complication, Pacific Rim filed the suit through a subsidiary in Nevada called Pacific Rim Cayman LLC, a subsidiary that had not been active since Pacific Rim sold their only Nevada interest in October 2008.

In June of 2012, the ICSID tribunal hearing the case ruled that it did not have jurisdiction under Central American Free Trade Agreement (CAFTA) because Pacific Rim had not been a U.S. company long enough sue using that mechanism. However, the tribunal did consider the ICSID to have jurisdiction under Salvadoran Investment Law, due to the fact that Article 15 of Salvadoran Investment Law allows for companies to sue the Salvadoran government through ICSID.  Therefore, the case will proceed to a third round of hearings.

A letter to ICSID officials in 2011 signed by 243 organizations from across the world said “Pacific Rim is using ICSID and the investor-state rules in a free trade agreement to subvert a democratic nationwide debate over mining and sustainability in El Salvador. These matters should not be decided by an ICSID arbitration tribunal. In the course of Pacific Rim’s intervention in the political affairs of El Salvador, four anti-mining activists have been murdered in the project area. We stand with these communities and the government of El Salvador in their demand that their domestic governance processes and national sovereignty be respected, and thus that this case be dismissed. We stand on the side of democracy.”

As the economic costs in the Pacific Rim case continue to mount, the dire social and environmental costs of Pacific Rim’s presence in El Salvador are taking their toll on the communities in the region of Cabañas.

Visit here for arbitration details and links to download documents in the case.