PRESS RELEASE: Not to the blackmail of Pacific Rim Mining/Oceana Gold 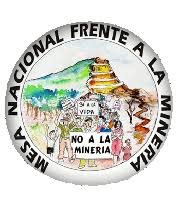 On September 15, 2016 an ICSID Tribunal closed the arbitration proceedings in the case that Pacific Rim/OceanaGold began on June 15, 2009 (over 7 years ago) against the government of El Salvador. During this time the government has spent more than US$13 million in legal costs in a suit where the company attempts to obtain more than US$300 million in compensation for not been allowed to harm the environment and the health of the inhabitants of El Salvador.

The next step in the proceedings is for the tribunal to issue an award, which may be released in the short term, may also be known within 6 months, and chances are that it may take an indefinite amount of time.

In this context, the National Roundtable against Metallic Mining in El Salvador-MNFM, states the following:

I. That the Strategic Environmental Assessment of the Mining Sector -EAE- conducted in 2011, concluded that the conditions of environmental vulnerability of El Salvador pose a significant barrier to the possibility of implementing an effective metallic mining industry that avoids the risks of environmental and social impacts and achieve a positive net contribution to the social and economic development of the nation.

II. That, 5 years after the EAE, the  conditions of vulnerability have worsened; which makes the development of extractive industries, particularly metal mining, in the country unviable. Making the arguments that Metal Mining could be a development vehicle for El Salvador, and that investment in that industry would solve the fiscal problems, as heard through the American Chamber of Commerce at the mining conference in Managua last August, false.

III. That the Salvadoran population has increased its awareness and rejection of metal mining as was demonstrated by the results of a recent survey conducted by the Central American University Jose Simeon Cañas -UCA- where over 73% of people agreed that the government should ban metal mining in the country.

IV. That the Episcopal Conference of the Catholic Church, and particularly the Archbishop of El Salvador, José Luis Escobar Alas, has expressed repeatedly and publicly its rejection of metal mining, considering the industry and threat to the environment and health of the population.

V. On Thursday August 25, 2016, the National Roundtable Against Mining had an audience with the President of the Republic who reaffirmed its commitment to not allow metal mining during his administration. The MNFM took the opportunity to present a draft executive decree to ban metallic mining, which could be in effect, while the Legislature approves a Law to Prohibit Metal Mining.

VI. That despite the unfavorable conditions for metal mining, Pacific Rim/OceanaGold has intensified its actions to blackmail the government of President Salvador Sanchez Ceren to cede to negotiations in the case arbitrated at the ICSID; and to allow the exploitation of gold and silver in San Isidro, Cabañas. It is also known that the company has sought the approval of metal mining in the country by lobbying senior state officials.

VII. The mining company has also intensified its public relations activities seeking to gain supporters for mining in Cabañas, through the El Dorado Foundation, which manipulates the needs of the impoverished people of the communities by palliating immediate needs in exchange for public support for mining.

Given the foregoing, the National Roundtable against Metallic Mining:

VIII. Looks positively the rejection of metal mining stated by the President of the Republic, Salvador Sanchez Ceren, and calls on him to maintain the sovereign and independent position of El Salvador.

IX. Calls on President of the Republic, to not give in to blackmail pressures Pacific Rim/OceanaGold, and maintain a firm position, regardless of the outcome of the award, as the company aims to be allowed to mine. The mining company knows that it has lost the case, and therefore bets on side negotiations to be allowed to exploit.

X. Request the President of the Republic to ensure that none of its senior officers contravenes his government’s decision not to allow metal mining in the country.

XI. Requests the President of the Republic considers the Executive Decree proposed by MNFM for immediate approval.

XII. Requests the Attorney General of the Republic to be vigilant and investigate, if necessary, possible indications of bribery of the mining company to any public official to obtain favorable treatment.

XIII.- Asks members of the Legislative Assembly to resume the approval process for the Prohibition of Metal Mining.

XIV.- Salutes and calls on the Bishop's Conference of the Catholic Church, the Archbishop of El Salvador, José Luis Escobar Alas, the different sectors, institutions, organizations and individuals who support the anti-mining struggle, the people of the communities affected by mining projects, and the Salvadoran people in general to pursues the ban on mining as an act of true independence.