Anti-mining activists in el Salvador and their allies in the US and Australia demanded on April 28th that de International Center for the Settlement of Investment Disputes, ICSID, release immediately a a favorable resolution in the impending case of Pacific Rim Mining vs El Salvador. 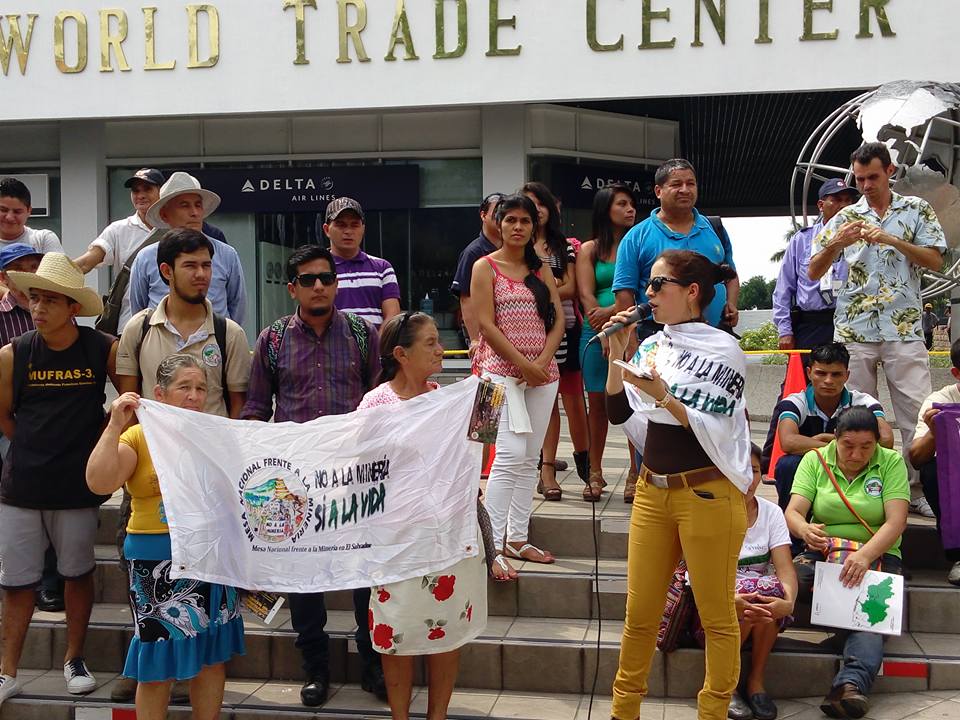 A statement delivered simultaneously to offices in San Salvador, Washington and Melbourne asked the World Bank to stop enabling a tribunal utilized by multinational corporations to undermine human rights. “Fifty years of ICSID and billions of dollars in corporate awards is enough. It’s time for the World Bank to evict ICSID and take a stand for environmental, social and economic justice” read the statement.

Pacific Rim launched a lawsuit against the government of El Salvador for $77 million dollars after President Mauricio Funes announced an administrative freeze on mining related proceses in 2009. The company had failed to meet regulatory requirements to obtain a permit for its El Dorado project, yet it utilized little known investor protection provisions within the Central America Free Trade Agreement, and later the Salvadorean investment law, to argue that it was entitled to compensation because the government’s decision not to extend the permit was political.

A panel of arbitrators agreed, in June 2012, with El Salvador's argument that Pacific Rim had set up a shell company in the United Stated states with the specific pupose of launching a lawsuit and ruled that the company was not entitled to pursue a case under the Central American Free Trade Agreement. The panel, however, ruled that the company could pursue the lawsuit under the now amended Article 15 of the Investment Law of El Salvador which, at the time, allowed any foreign corporations to bypass the local judicial system and utilize the ICSID as a dispute resolution mechanism.

The company ran into financial troubles in 2013 when it failed to raise further investment to sustain a high profile law suit.  In October 2013 it sold its assets, including the law suit against El Salvador, for only US 10.2 million dollars to Australian/Canadian Company OceanaGold.  OceanaGold continued to bankroll Pacific Rim’s lawsuit against El Salvador without assuming any liabilities; it also raised the stakes by increasing the lawsuit to 315 million US.

Members of the National Roundtable Against Metallic Mining in El Salvador, La Mesa, called this a “shameless act of legalized extortion” carried out by company that has never had any ties to El Salvador and never invested one cent in the country in the first place.  “How is it possible that such a company can make a 10 million dollars investment and immediately demand 315 million dollars from our government?” asked environmental leader   Vidalina Morales.

The final arguments on the merits stage  of the case were presented in September 2014, but 18 months after the hearing, the tribunal has yet to issue a resolution.  This delay has already made the case of OcenaGold-PacRim vs El Salvador one of the longest running cases in the ICSID,  an article published in the Global Arbitration Review argues that the five longest running cases in the history of ICSID have waited between 6.3 years to 10.5 years. Considering that Pacific Rim submitted its request for arbitration in April, 2009, it safe to say that this case has already taken the number 5 spot on the list, with 7 years in waiting.  Also, the case has already surpassed the average number of days, 472, the panel takes to issue a resolution after the final arguments.

Not only has the case become one the longest running cases at ICSID, but it has cost the Salvadorean public purse over 12.5 million dollars in legal expenses.

Even if the law suit is declared with no merits and the tribunal rules in favor of El Salvador, we have already incurred a loss says Bernardo Belloso, president of CRIPDES and a member of La Mesa.   For a small country with limited financial resources and critical social and environmental problems, 12.5 million dollars could be better spent towards social programs that could benefit the population.  “12 million dollars, for instance, is the yearly cost of running Ciudad Mujer, an innovative network of government run centers that promote gender equality through reproductive sexual health, holistic approaches to gender violence and economic empowerment opportunities for over 150,000 women who benefit from its programs every year.” He stated.