Women in Resistance Against the World Bank 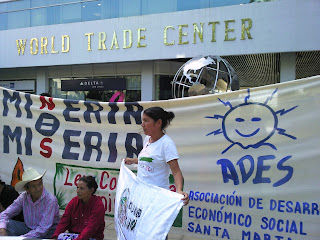 On Thursday October 22, the National Roundtable against Metallic Mining-MNFM and representatives of various communities and social organizations gathered outside the offices of the World Bank in San Salvador  to express their firm opposition to metallic mining projects and to send a message to the International Centre for the Settlement of Investment Disputes, ICSID which is part of the World Bank and where el Salvador is being sued for $301 million for not granting a mining licence. The law suit was launched by Pacific Rim, now OceanaGold, in 2009. In October 2014, the final arguments were heard by the panel but to date the final decision is unknown.

Environmentalist and human rights defender Vidalina Morales, president of the Association for Economic and Social Development ADES, Santa Marta, expressed to the crowd that communities and organizations defending the environment will not recognize any resolution resulting from the ICSID. The ICSID, she said is a "perverse instance designed to protect big business and not the rights of communities."

The population attending this concentration were mostly women leaders, peasants, workers of the land who from the early hours of the morning undertook a long trip from their communities to the Salvadoran capital with a common goal, to make clear their opposition to mining and thus their scorn for the law suit government of El Salvador faces at the ICSID.

Women defenders of natural resources are the same that in everyday life experience the severe shortage and water pollution; women who suffer the serious consequences of excessive and irresponsible use of natural resources by large transnational corporations that appropriate community assets while operating above the legitimate right of communities to choose their own development models, to defend their sovereignty and self-determination as peoples.