The lawsuit that could put El Salvador in check 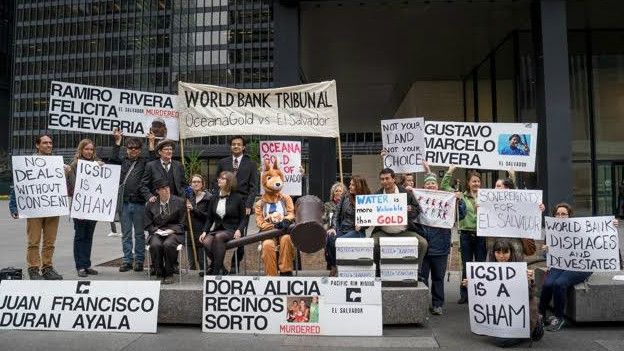 In an office in Washington, three arbitrators are about to decide on the lawsuit filed by the multinational mining company OceanaGold against El Salvador.

According to the government of the Central American country, what is at stake is nothing less than the health of its inhabitants.

Meanwhile, the mining company insists on the importance of the judicial security that investors anticipate in order to defend their interests.

This case also has implications for the future of other countries in Latin America and in the rest of the world.

“What is at stake, is whether an international company can use the international system of arbitration to oblige a sovereign State to change its laws, or whether a foreign investor has to comply to the laws of the country in which it has decided to invest”, Luis Parada, coordinator of the US team of lawyers from Foley Hoag firm, that is representing El Salvador, told BBC Mundo.

The mining company’s argument is that it is defending its vested right in a legitimate way.

OceanaGold, an Australian-Canadian mining company, is suing El Salvador for the country’s decision not to give it a concession to exploit gold.

The Salvadoran government claims the exploitation could contaminate the scarce water resources that the nation has.

The initial demand made by the company was of US$314 million, then reduced to US$250 million.

This amount is equivalent to the budget of three years of health, education, and public security combined, according to Yanira Cortez, as she said during a trip to Canada to divulge the Salvadoran position. She is the Deputy Prosecutor for the defense of environmental rights in of El Salvador.

“We have the right to decide on our own natural resources”.

The final hearing already took place, and a decision by ICSID – the arbitration panel of the World Bank, based in Washington – is expected at any moment now.

According to Luis Parada, “what OceanaGold really wants is that El Salvador, under the threat (of having to pay), grants the concession”.

From Pacific Rim to OceanaGold

The lawsuit has its origin in 2004. Back then, the Canadian company Pacific Rim, later acquired by OceanaGold, asked for a concession to exploit a gold mine, El Dorado, in the northern department of Cabañas.

Parada points out that El Salvador did not give the exploitation permission because Pacific Rim did not comply with three requirements in the Mining Law.

Pacific Rim did not own nor had the permission of the owners of the land that was the object of the concession request; it also did not present a feasibility study nor an environmental permit”, Parada, lawyer with Salvadoran origins said to BBC Mundo.

Parada maintains that when the Salvadoran government notified the company of its decision, the firm tried to convince the government to change the Mining Law and even “wrote a project for a new law in 2007, trying to get it approved in the Legislative Assembly”.

“When this proved impossible, Pacific Rim threatened El Salvador with international arbitration and changed the nationality of its subsidiary Pac Rim Cayman from the Cayman Islands to the United States, in order to have recourse to the Free Trade Agreement between the United States, the Dominican Republic and Central America, called CAFTA in English”, stated Parada.

“And then the arbitration was initiated in 2009”, he says. “OceanaGold intervened in the arbitration from 2012, when it acquired 20% of the actions of Pacific Rim, and then bought the remaining 80% in 2013”.

El Salvador achieved that the ICSID acknowledged that the arbitration tribunal itself does not have jurisdiction to decide on the matter under CAFTA. However, the Washington-based panel declared itself competent under the Investment Law of El Salvador.

“For El Salvador, much is at risk in this case”, Jennifer Moore said to BBC Mundo. She is the coordinator of the Latin American program of MiningWatch Canada, a Canadian NGO that monitors the impact of Canadian mining projects in the world. “For OceanaGold, on the other hand, it is a relatively cheap bet”, added Moore.

El Salvador claims that Pacific Rim did not comply with the requirements of the Mining Law, and that the country has the right to implement measures designed to protect the health and life of its population and of the environment.

According to Parada, this is something crucial, “especially in such a small country as El Salvador (21.000 square meters), with big water scarcity, that essentially relies on the main river, the Lempa, which crosses the whole Salvadoran territory and that would be affected by any spillage of toxic substances on the site of the Pacific Rim project”.

With regards to the arguments presented by the international mining company, Parada maintains that “they have changed as the arbitration has advanced”.

“First they said that they complied with all the legal requirements, except for the environmental permit, saying that they have not been granted permission for arbitrary reasons” the lawyer tells us.

“But in the end, Pacific Rim/OceanaGold, has maintained that it has the automatic right to the concession even if they did not comply with the legal requisites, for the sole reason of having explored and found minerals” he adds.

The spokesperson of OceanaGold, Andrea Artell, remarked in the Canadian publication The Catholic Register: “The exploration licence for the El Dorado Project, which was issued by the El Salvador government under that country’s mining law, and which was supported by Pacific Rim’s discovery of valuable gold reserves, created a legal duty for the government to process the mining exploitation concession application”.

OceanaGold bases the US$250 million claim on the amount of gold they estimated they could have been able to extract from the El Dorado mine.

“Pacific Rim has invested tens of millions of dollars. But we believe that the appropriate measurement of the damage is the value of the minerals that would otherwise have been extracted” Timothy McCrum, Pacific Rim’s lawyer in the dispute, said this year to BBC.

When BBC Mundo questioned this argument, noting that the company would lose the “tens of millions” it had invested, and not the much larger amount of US$250 million for gold they have yet to extract, McCrum remarked: “This is a question to be resolved by the arbitration panel”.

OceanaGold ensures that they complied with the legal requirements, but were affected by the decision of the then president, Antonio Saca, who, via the media, introduced a de facto moratorium to suspend all concessions of metallic mining in answer to the popular protests and demonstrations.

McCrum told BBC Mundo: “Im March 2008 the then president of El Salvador declared in the media that there would be no more metallic mining in the country. It was just declarations in the media, with no legal alterations”.

The fight in El Salvador has its origin in the same communities that will be affected by possible concessions.

“Without a doubt other governments are aware of what is going on here” she states.

After the lawsuit of OceanaGold, El Salvador changed its law on investments in 2013, deleting any reference to the competence of the international arbitration system to rule in controversies with foreign investors.

However, the mechanism of arbitral tribunals is included in more and more international investment treaties and accords. It is one of the most controversial points in the Transatlantic Trade and Investment Partnership (TTIP), which is being negotiated at the moment.

Parada believes that understanding that a risk exists in the case against El Salvador is of vital importance to other countries, because “what is at stake is their own essence as States that must safeguard the health and life of their inhabitants”.

“The fact that we are facing the doubt of which should be the priority in the international arbitration – whether it should be human life, or corporation profits – must make all States reflect on the necessity to radically change the treaties that they are signing, that give such extensive powers to these arbitral tribunals”.