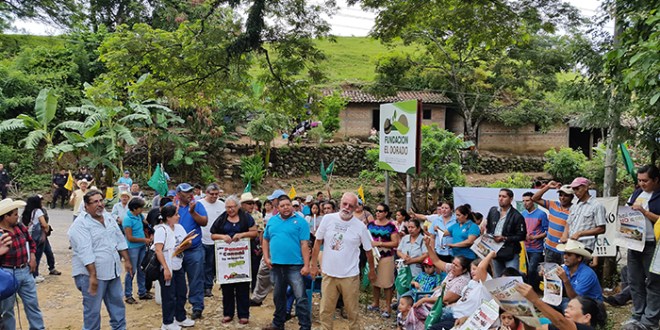 People of different communities in the San Isidro municipality, region of Cabañas, manifested their opposition to a metal mining project in the territory.

The inhabitants maintain that the proyect would contaminate the water resources of the area, and consequently aggravate the already existing problem of access to clean drinking water and other necessities. Additionally, locals explain that one of the main water resources that would affected by the contamination is the Titihuapa River, a tributary of the Lempa River. According to information provided by the inhabitants of San Isidro, the project site would stretch over a land portion of 48 square kilometres, land currently being explored, and would amount to over a third of the region of Cabañas total surface.

“Four million inhabitants will be affected in El Salvador, because this will trigger a domino effect, damages originate in Cabañas, but they will be felt elsewhere along the Lempa river”, stressed father Neftalí Ruiz, president of the Environmental Committee of  Cabañas (CAC).

Francisco Pineda, member of the CAC, states that the communities asked OceanaGold corporation, the entity behind El Dorado Foundation, not to carry out gold and silver extraction activities in the area.Pineda underscores that as the land is used for agricultural activities, the damages will not be related to water quality only, but it will impact the crops as well.

“Starting from 2006 we have provided evidence that supports our conviction that the mining industry in El Salvador is not feasible” says Rina Navarrete, resident in the municipality.The Inhabitants of San Isidro reported that the company has started some projects “for the good” of the community, like the construction of classrooms for schools, and the expansion of hospital wards belonging to the communities.

“Now they are trying to present Fundacion El Dorado as if we all think their objective is to do charity work” Pineda states.

For the families living nearby the mining project site, it is important that the legislative assembly approves a regulation to prohibit the mining industry in the country, to avoid that other foreign companies obtain licenses for exploration.

“Stopping mining explorations is more important than any political goal in the country and any other negotiation taking place at the legislative assembly.  This is we why remind them that they are responsible for approving the laws”, argues Pineda.During the protest, local residents reported that members of associations fighting the mining industry were murdered under circumstances that have never clarified.

“How can we Salvadorans allow intruders to come here and exploit our land and, on top of that, be criminalized for fighting for our lives and the safeguard of our environment?” Navarette concludes.

Currently, the company is waiting for a resolution from International Centre for the Settlement of Investment Disputes (ICSID), after it sued the Salvadorean government for $300 million dollars.