Urgent! Strengthening a powerful global voice in defence of life 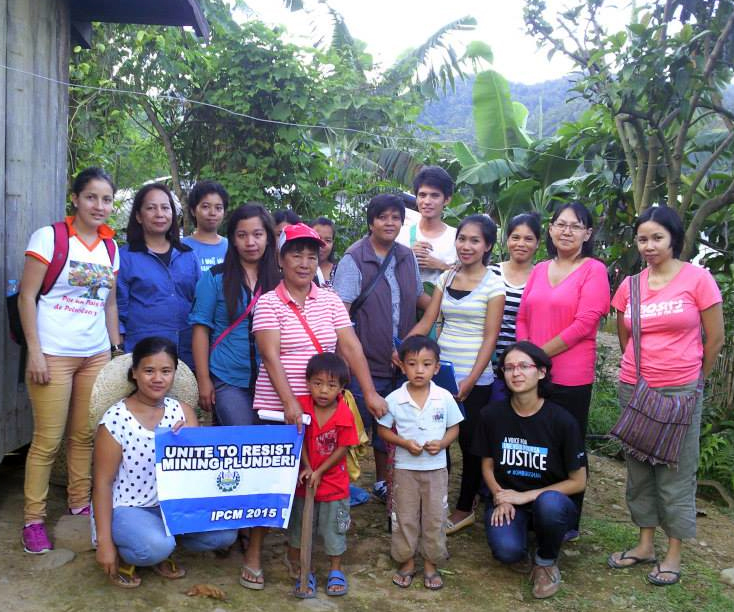 On the 15th of August 2015, I was invited to participate in a mission of solidarity to the region of  Didipío, Nueva Vizcaya, the Philippines. The mission’s goal was to understand the battles and realities of the communities where the Australian mine company OceanaGold operated since 2013.

At first glance the impression is one of a quiet community. At the side of the road, huts come into view from which, once in a while, a girl or boy appears, with a curious look on these strangers that are arriving.

We continue until we find ourselves in front of a grey landscape, the place where OceanaGold runs the mine. The image before us delineates with every meter we advance, the route continuing around the area. A friend who has visited the place weeks before, tells us of how much the destruction of the landscape has advanced in just a few days, the machines drilling without stop, trucks entering and leaving with loads of dirt. We can see the strange machinery with pipes that move the waste into a lagoon; watching the contents of the lagoon is one of the most important moments of our tour. Right in front of us, there is a lagoon not containing fresh water that could provide relieve from the heat, but rather a toxic lagoon coloured green and yellow with some white shades in it. The trees touched by the water are drying out little by little, and it seems clear that there is no protection measures to prevent floods in case of heavy rain, which is a latent danger to the nearby water sources and for all life existing in the place.

Going back to the community, we attempted to coordinate a meeting to share experiences between those visiting and leaders of the community. We meet with leaders of two organizations that work against mining, but whose work is disconnected, which immediately reminds me of the reality in El Salvador, where Pacific Rim (now owned by Oceana Gold) has used the same strategy: dividing the communal leadership to enable their control of the territory.

As it is not possible to meet with the leadership we instead direct ourselves to Mrs. Marsh, a woman of 50 years, who invited us to her home. She tells us that her house was built with the earnings derived from artisanal mining; however, the opportunities were terminated with the entrance of Oceana Gold, who now owns the mine. Marsh tells us:  “Now they say that it is because of the artisanal mining we had before that the river is polluted and why we don’t have water, and because of this we have to buy it. But we did not use all this poison that they use to extract gold.”

She continues telling us of some difficult instances since the arrival of Oceana Gold. Her husband was assaulted on different occasions while going to his portion of land which was on the other side of the mine. There are people from the communities working in the mine, but they are the ones who get paid less, they take more risks and are exposed to  accidents. The women who work in the mine take care of washing clothes and cooking for the workers. There is no solid organization in the community: there are people who support the mining and others who are against it, and this favors OceanaGold, Marsh says.

After midday, Marsh and her daughter offer to go for a walk in the zone by the river which flows just a few meters away from the mine. During our stroll, luxurious cars owned by OceanaGold pass by us, and Marsh and her daughter walk cautiously and continually looking behind their shoulders, as if someone was following us to possibly hurt us.

The river has a brownish color, and an unpleasant odor can be smelled in the whole area around it. Mrs. Marsh shows us where their portion of land lays, right on the other side of the mine. Her family has not been able to make use of that land in a long time, since the mining industry does not allow them to cross the land where the operations take place.

After a bit of walking, we arrive in a wooden cabin that lays some meters away from the mine. A 40-year-old man is resting there, his joyless face partly hidden by a hat. He invites us to sit on some pieces of wood outside of his hut to talk about what we have seen today. Our small group attracts some women that live nearby, who decide to join us. They share their stories abut the difficult situation in the community, and in the same way we tell them about the Salvadoran experiences in fighting against the same enemy – OceanaGold. 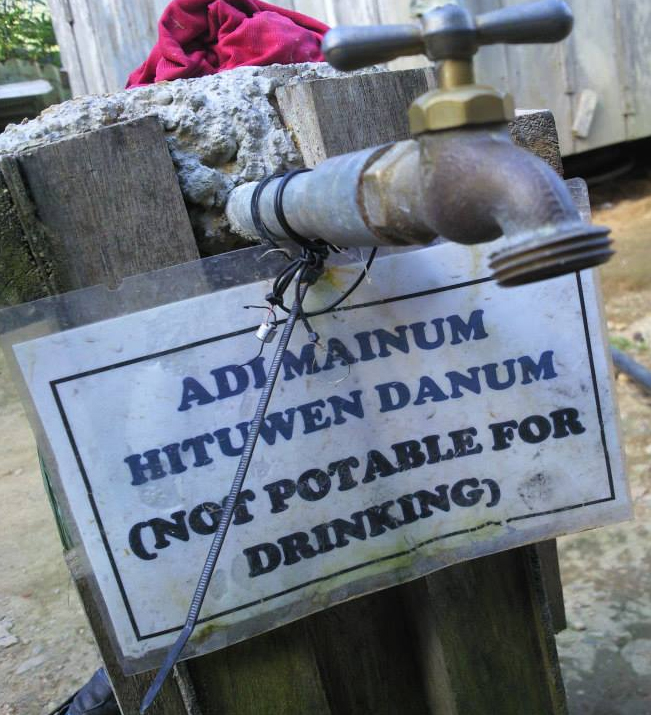 At the end of the talk, a crucial question ensues: What are we going to do to change this reality? The reactions are various: some faces show anguish, others resignation, sighing along the lines of “the company is too strong, we can do nothing on our own”. However, others choose not to give up and express their willingness to keep fighting to defend their lives and the lives of the new generations that are at risk: who else can stop this destructive landslide, if not the community itself? The truth is, help from outside can only come if the affected population gets organized first. This reflection of hope concludes our talk, and we say goodbye with the belief that we can win this battle together. Just before leaving, we all repeat aloud: El pueblo unido! Jamás será vencido!

On our way back, we meet a woman who is washing some clothes in a public sink on which there is a sign warning that that water is not potable for drinking. We ask her where they take good water from. She answers that some can afford to buy drinkable water, but all the others take it from that very faucet that holds the warning sign. Fear overwhelms me: fear for the lives of the population of Didipio, fear for the risk that El Salvador is taking due to the presence of Oceana Gold.

The key message for the Salvadoran population is that Oceana Gold represents the biggest threat of destruction in El Salvador, and it must not settle in and grab what is ours. If El Salvador wins this battle, it will send a strong message of hope to the world: it will have won the biggest of his battles, and conveyed a convincing signal to the World Bank, the mining industries, and most importantly to the UN, so that it might intervene in changing the mechanism that now allows companies to sue populations and governments that are just trying to protect their legitimate rights.

In order to win this battle, it is fundamental for the organized population not to desist, and for the people of the world to unite in a single voice. By doing so, this voice can be heard by all States, and spur them to take a strong stance to ratify laws that ban the mining exploitation. Governments will also need to put their people’s interests before anyone else’s, and think twice before ratifying laws that lay the institutional basis for the approval of mining activities in countries like El Salvador.

If injustice, impunity, and destruction of life are the weapons of capitalism, our answer will be the solidarity between peoples, like a seed that sprouts and multiplies as a symbol of hope for humanity. I am completely convinced that as long as there is solidarity between different peoples, there will be hope to continue fighting and ultimately win this battle in the defense of life.