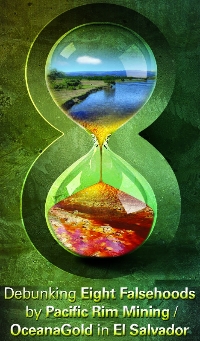 (Ottawa/Washington/Sydney) The President-elect of El Salvador has publicly committed to prohibit new mining during his administration, just as his predecessors have done since 2008. OceanaGold should respect the democratic process in El Salvador, abandon its acquisition of Vancouver-based Pacific Rim Mining, and drop its lawsuit against the government of El Salvador for not having permitted a mine, according to international civil society organizations. A new study debunks eight falsehoods the company has used to try to justify mining in El Salvador and undermine public debate and policymaking.

Canadian-Australian firm OceanaGold acquired Pacific Rim Mining in November 2013. Up against stiff local and national opposition in El Salvador, Pacific Rim has been trying to get at gold deposits in northern El Salvador for about a decade.

In 2009, Pacific Rim launched what is now a $301 million lawsuit against El Salvador in a World Bank arbitration tribunal, arguing that the government must grant the company the permit to begin its El Dorado gold project. OceanaGold, having bailed out Pacific Rim from near bankruptcy in November 2013, aims either to strike a deal with the Salvadoran government or to continue fighting the suit.

But OceanaGold is making a shaky bet. The facts are:

These facts respond to eight “falsehoods” from Pacific Rim/OceanaGold that have been carefully debunked in a new report published by the Blue Planet Project, the Council of Canadians, the Institute for Policy Studies, MiningWatch Canada and Oxfam International: Debunking Eight Falsehood by Pacific Rim Mining/OceanaGold in El Salvador, available online here. To read in spanish click here.