When it Comes to Mining: The Canadian Government has a Closed Door Policy, Even to Canadian Citizens

When it Comes to Mining, the Canadian Government has a Closed Door Policy, Even to Canadian Citizens 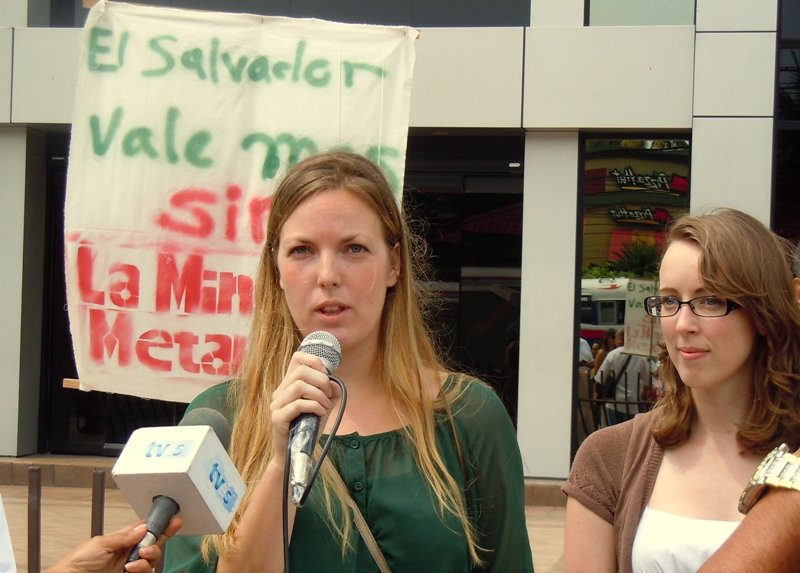 On Wednesday June 13, the National Roundtable against Metallic Mining (the Mesa) held a rally in front of the Canadian Consulate to ask the Canadian Government to stop its free trade agreement negotiations with El Salvador, and withdraw its support for Canadian mining company Pacific Rim.  Two Canadian citizens, as well as a delegation visiting from Baltimore, MD, accompanied the rally.

When the Mesa’s Canadian allies attempted to enter into the consulate building to present a letter with the Mesa’s concerns, security guards wouldn’t even let them through the door.   Eventually, the Ombudsman for Human Rights’ Office was called to the scene and the group was told that only one of the two Canadians present would be allowed to enter, and that they would only be allowed in if they had some sort of problem with their passports or immigration paperwork.

Erika Stahl, one of the frustrated Canadians denied entry said on her blog, “This is outrageous treatment. Any citizen of any country is allowed to enter their embassy while traveling abroad - that's what embassies are for. Your political affiliations don't affect this basic right, nor do your stances on controversial issues. The embassy is Canadian territory. As citizens, we have the right to enter our territory. They do not have the right to refuse entry to law-abiding Canadians.”

This attitude from the Canadian government shows their closed door policy for anyone associated with mining opposition, which apparently extends to Canadian citizens abroad.

Below is the Mesa’s press statement for the activity.  The Spanish version is available here.

Pictures of the activity can be found here and here

For Spanish press coverage of the activity in CoLatino see here and here.  It was also covered by News Millennium. 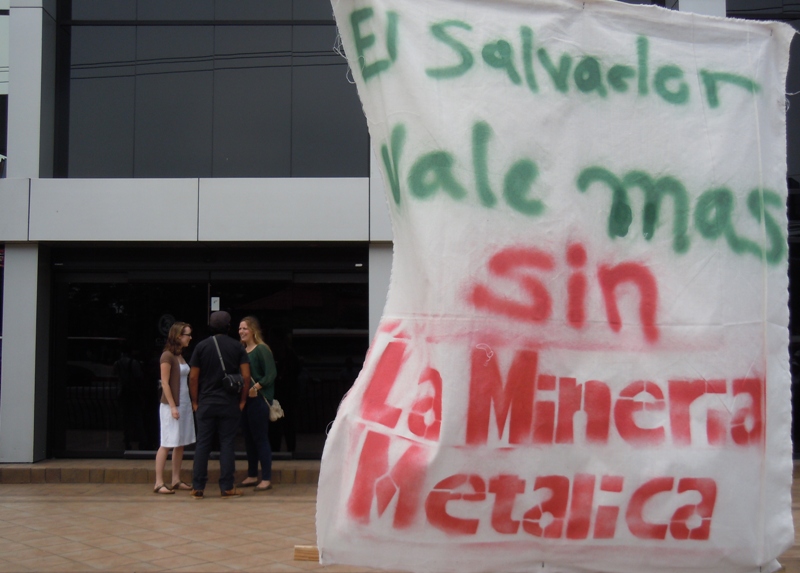 On June 1st, the International Centre for the Settlement of Investment Disputes (ICSID) ruled that Pacific Rim, a Canadian mining company, has the right to sue the Government of El Salvador for not allowing the El Dorado mining project in Cabañas.   Now, the Salvadoran government will be forced to prove that its refusal to grant mining permits is a sovereign public policy decision that any country could make and that it is not a decision taken on a whim by the government.

Our protest today, in front of the Canadian Consulate, is to condemn precisely this type of mercenary attitude from corporations like Pacific Rim, who are wrapped up in the middle of the neoliberal model, and that take advantage of trade agreements to extort governments when there is a conflict of interest.  We demand that the Canadian Government stop protecting and promoting this vicious mining company and force that it withdraw its suit against El Salvador in the ICSID.  The arbitration that Pacific Rim filed through CAFTA and Salvadoran Investment Law against the Government of El Salvador for $120 million should be sufficient evidence to prove the mercenary attitude of corporations.

We assert that this situation is due to the implementation in our country of neoliberal structures for trade liberalization, and the privatization of services and public goods that has been promoted by ARENA governments.  The free trade agreements that were signed and are now in effect, on top of eroding sovereignty, put the social, economic and labor rights of the population at risk.

As the National Roundtable against Metallic Mining, we energetically condemn that El Salvador’s sovereignty and the population’s wellbeing are subjected to the plans of tribunals that are designed to promote corporate interests while at the same time legitimizing the pillaging and destruction of the planet.

Our struggle against mining has forced us to reject the hidden negotiations that El Salvador is entering into for a Free Trade Agreement with Canada, which is based on the agreement signed with the United States.   Canada is a country which receives more than 4% of its GDP from mineral extraction from other countries and that will not have other investment interests besides mining.

For this reason, we call on the Canadian Government to stop the free trade negotiations with El Salvador and that at the same time to stop protecting Pacific Rim and to force the company to withdraw its ICSID suit against the Government of El Salvador.

Stop the multi-million dollar suit of Pacific Rim against the Salvadoran Government in the ICSID! NO to the Free Trade Agreement with Canada.