Monday April 30, Pacific Rim announced in a press release on MarketWatch  that the company had been informed by the ICSID that a decision in the jurisdiction round of their case would be released by May 31st.

The press released reiterated the company’s often criticized claim that “the El Dorado deposits are inherently environmentally clean and the state-of-the-art production and processing methods planned for El Dorado are expected to have a negligible impact on the local environment.”

The company yet again blamed environmentalists for lack of jobs around the proposed mining site: “PacRim drastically reduced its Salvadoran exploration expenditures in July 2008 when it became apparent that efforts to secure a mining permit for the El Dorado project were being stalled by the GOES, a situation capitalized on by various rogue anti-mining and anti-development organizations. As a result, over 300 Salvadorans lost their jobs in one of the poorest regions of the country - a region that sorely needs the economic benefits this operation can contribute - and future jobs in addition to the economic activity and social programs that would benefit the region and the nation were forestalled.” 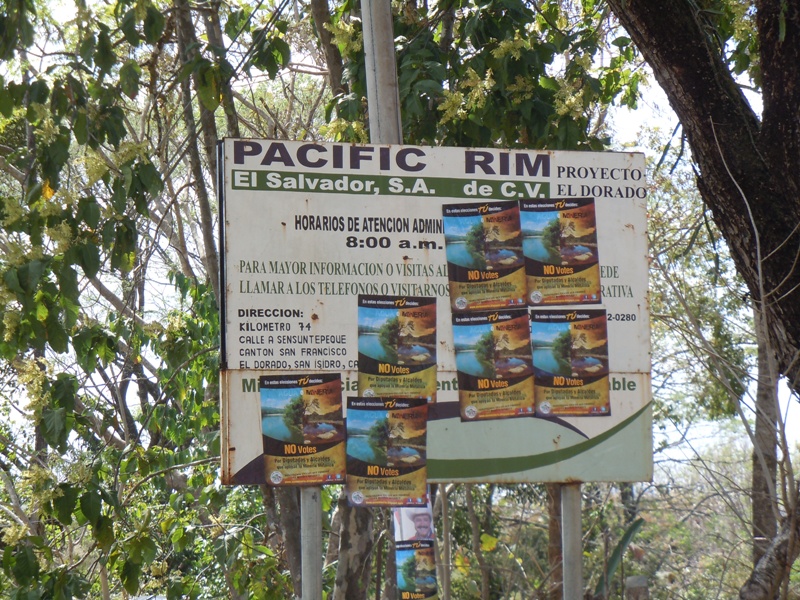 Upon the publication of Pac Rim’s statement, the Council of Canadians immediately publicized a counter press release (below) highlighting the environmental and social problems that the proposed project has already created and would continue to create for the communities of Cabañas.

A media release issued by Vancouver-based Pacific Rim Mining Corp. today states, “PacRim recently received notification from the International Center for the Settlement of Investment Disputes (ICSID) that a decision on the Jurisdiction Objection will be announced by May 31, 2012. The Jurisdiction Objection was filed by the Government of El Salvador (GOES) in relation to the arbitration action commenced by PacRim in April 2009 under the Dominican Republic-United States-Central America Free Trade Agreement and the Investment Law of El Salvador (the CAFTA/ILES action).”

Background
In 2007, the Ministry of Environment in El Salvador denied Pacific Rim the permits needed for their El Dorado mine. In retaliation, the company (through its US-based subsidiary) launched a $77 million US-Central America Free Trade Agreement challenge. A decision on this ‘investor-state’ case will be made by an ‘International Centre for Settlement of Investment Disputes’ panel, which is based at the World Bank in Washington, DC.

Water implication of the mine
The Inter Press Service has reported that, “Peasant farmers from the northern Salvadoran province of Cabañas fear that mining operations by Pacific Rim planned for the region will consume 30,000 litres of water a day, drawn from the same sources that currently provide local residents with water only once a week. Environmentalists and experts have also warned that if the operations begin…the cyanide that would be used by Pacific Rim to extract gold and silver could contaminate the area’s groundwater and soil.”

John Cavanagh and Robin Broad have written in The Nation, “Residents of (the northern Salvadoran community of Santa Marta in the northern department of Cabanas) are fighting US and Canadian mining companies eager to extract the rich veins of gold buried near the Lempa River, the water source for more than half of El Salvador’s 6.2 million people, (which also winds through Guatemala and Honduras). …The communities’ goal: to make El Salvador the first nation to ban gold mining.”

Over the past two years, at least nine anti-mining/ water justice activists who have expressed opposition to the mine have been murdered. In June 2009, Marcelo Rivera Moreno was found dead, he had been tortured. That December, Ramiro Rivera Gomez (the vice president of the Environmental Committee of Cabanas) was shot dead. Later that month, Dora ‘Alicia’ Recinos Sorto (also a member of the Environmental Committee) was killed. Felícita Echevarría, Esperanza Velasco, Darwin Serrano, Gerardo Abrego León were also killed. And most recently in June 2011, Juan Francisco Duran Ayala was found dead after putting up posters against the El Dorado mine. He had been shot in the head. The company denies any involvement in these murders.