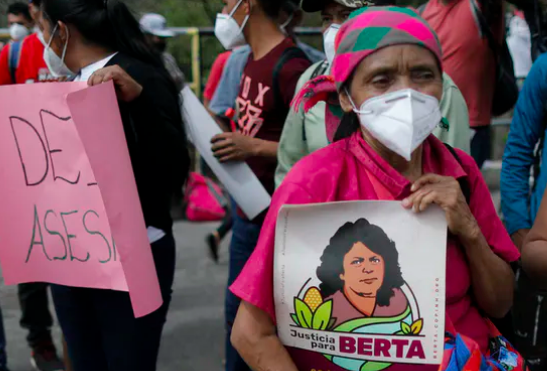 Two men shot Arnold Joaquín Morazán Erazo to death in his home in Tocoa, Honduras, one night in October 2020. Morazán was an environmental activist and one of 32 people criminalized by the Honduran government for defending the Guapinol River against the environmental impacts of a new iron oxide mine in the Carlos Escaleras National Park.

So far, at least eight people who have opposed the mine have been killed, putting its owner, Inversiones Los Pinares, at the centre of a deadly environmental conflict in the mineral-rich Bajo Aguán region. Local communities are concerned about the mine’s potential ecological damage. In their attempts to defend their territories, local leaders have been surveilled, threatened, injured and imprisoned, and some, like Morazán, have been killed.

Honduras is the deadliest place in the world for environmental defenders. Hundreds of them have been killed since 2009, including the Indigenous environmental leader Berta Càceres, who was assassinated in 2016.

The details are murky for some of the killings. In 2019, as a member of a fact-finding delegation, my colleagues and I documented that national police and military forces have patrolled the territory surrounding the mining project. We have recommended a thorough, prompt and impartial investigation of the human rights abuses by military police and paramilitary forces against human rights defenders and journalists in Tocoa.

Read news coverage based on evidence, not alarm.
The roots of conflict
Communities in Tocoa have persisted in organizing against the mines since 2011, when the Carlos Escaleras was declared a national park. The next year, congress reduced the park’s no-development zone to accommodate the mine’s development, following a permit process mired by irregularities.

Inversiones Los Pinares is owned by Lenir Pérez, a businessman previously accused of human rights violations, and Ana Facussé, daughter of the late palm oil magnate, Miguel Facussé. Even though the mine hasn’t yet exploited the iron oxide in the 200-hectare concession, community water supplies are polluted, trees have been flattened and landslides and flooding are more frequent.

In 2018, Los Pinares began to build an access road to the mine. In response, community members in Tocoa, including Morazán, established the Municipal Committee for the Defence of Public and Common Goods to campaign against the dispossession of natural resources by extractive industries. They submitted five requests for public consultations and held demonstrations in front of city hall. They also erected a “Camp in Defence of Water and Life” to block access to the mine.

In 2019, 12 of the accused environmentalists appeared voluntarily before authorities to face the charges against them: usurpation, arson, robbery, unlawful detention, illicit association and aggravated robbery. Eight of them remain imprisoned, although the prosecution has not presented any solid evidence to justify such prolonged detention.

The state also deployed the police and the army to protect the interests of Inversiones Los Pinares, eschewing the internationally recognized rights of the communities to organize, defend the environment and protest peacefully against the mine.

The Institute for Policy Studies, Washington’s first progressive multi-issue think tank, awarded the community committee with the international Letelier-Moffitt Human Rights award. In 2020, the committee members were nominated for the Sakharov Prize for Freedom of Thought awarded annually by the European Union.

Yet, in Honduras, these same activists are victims of defamation campaigns, criminalization, social media attacks and constant threats. Several residents have been forced to flee Honduras to escape criminal persecution. Meanwhile, the state uses corruption and police repression to guarantee impunity for those persecuting defenders.

The United States and Canada play a key role in the current crisis. They have geostrategic and economic interests in Honduras, through trade agreements and aid programs implemented after a 2009 coup. Afterwards, President Juan Orlando Hernandez declared Honduras “open for business.”

The country sold its natural resources, fuelling the expansion of extractive industries and causing conflicts with communities. The corporate-friendly General Mining Law lifted a seven-year moratorium on new mining projects — it was developed with technical assistance and funding from the Canadian government.

Under the Geneva Convention rules, the international community should condemn the state’s violence against environmental defenders and accept asylum applications.

It should pressure the Honduran government to enable free, prior and informed consent, and call for free and fair elections. Until then, the international community should suspend non-humanitarian economic aid to Honduras.

Since it launched its project in Tocoa, Inversiones Los Pinares has reinforced patterns of violence, stigmatization, defamation and criminalization of environmental defenders. At the same time, state authorities have failed to meet human rights obligations.

“We feel vulnerable. While we were always protesting pacifically, here in Honduras you are criminalized for defending nature. But we do believe that water cannot be negotiated, because water is life,” Reynaldo Dominguez, one of the Guapinol defenders, told me in a recent interview.

The persistent corruption, structural violence and impunity suggest that Morazán will not be the last victim assassinated for defending nature for the livelihood of the community.