One of the most essential aspects of COVID-19 prevention is regularly washing your hands; however, hundreds of thousands of Salvadorans are facing COVID-19 without reliable access to water. According to the United Nations, more than 600,000 people did not have access to any type of drinking water and sanitation services in 2016 and more than one million people only had access to deficient water services. According to news reports, this situation has possibly worsened due to the pandemic.

Rosa Amelia Mendoza, a 45-year-old mother of three who resides in Colonia Altavista, a municipality about 15 kilometers from downtown San Salvador, has not had any running water in her house since the pandemic started back in March 2020. In fact, she hasn't had any tap water consistently in her home for over two years. On a phone call with Global Voices she said:

“I am afraid for my family, everyone recommends that you wash your hands regularly, just to make sure the virus doesn't get to you. But how can you do that if there is no water to do it with? There is no river or well nearby that we can go carry water, and we don't have the means to pay a water truck regularly. I am not working right now.”

Mendoza's story is similar to thousands of communities in the capital city of San Salvador and its periphery. Cities such as Ilopango, Mejicanos, Soyapango, Ciudad Delgado, Altavista, and parts of San Salvador — where many working-class people live — are some of the most affected. According to EFE News Agency, one of these communities, Soyapango, also has the second-highest rate of COVID-19 contagion in the country.

Not having running water in homes is not a new problem, yet COVID-19 made the situation more dire since water is crucial for hygienic measures against the virus. Journalist Santiago Leiva told Global Voices via text:

“Water is a rusty subject similar to the pipes that occasionally serve it. The water problem is so deep that despite the street protests that took place in the past, there was never an echo of concern from past governments. Water has not yet ended up serving the entire Salvadoran population.”

What is the source of the Salvadoran water problem?
Access to water is not legally recognized as a human right in El Salvador, and the country is at risk of drought. Although lack of water regulation and climate change are two of the reasons for El Salvador's overall water deficit, in urban areas, the most pressing issue is related to a lack of public services. The affected communities in San Salvador mentioned above are supplied with water from the Las Pavas processing plant, an old water processing plant that should have been out of use or upgraded years ago with funds approved by the legislative Assembly in 2012, 2016, and 2018. The work was never completed.

Las Pavas is the only plant that renders water to the greater metropolitan area of San Salvador. Yet, today, the plant is not producing enough clean water to provide for the over one million people who depend on it. If it were to break down during the pandemic, as it did in January 2020, it would be even more disastrous.

Allegations and cases of corruption within the entity responsible for water services (Administración Nacional de Acueductos y Alcantarillados, or ANDA) have been present since the mid-1990s. Carlos Perla, president of ANDA from 1994 to 2002, for example, just finished serving a 15-year jail sentence for corruption. Recently, Frederick Benites, president of ANDA under the Nayib Bukele administration, informed the Attorney General of El Salvador about years of grave cases of mismanagement of public funds worth millions of dollars. 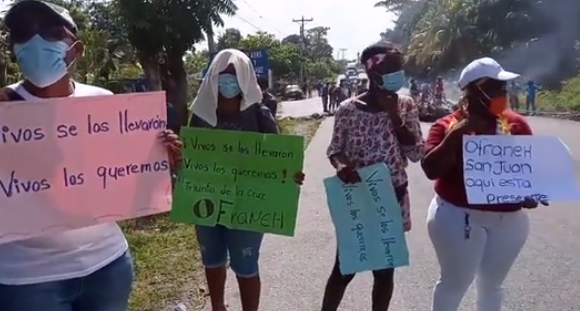 The plant has been mismanaged over the last 15 years, so now we have an annual deficit of $33 million.

The Nayib Bukele administration has claimed that the Las Pavas water plant has not received proper maintenance or upgrades since Francisco Flores was president from 1999 to 2004. President Bukele shared photos and explained how the negligence and corruption of the last 30 years have brought the Las Pavas plant to its current condition. 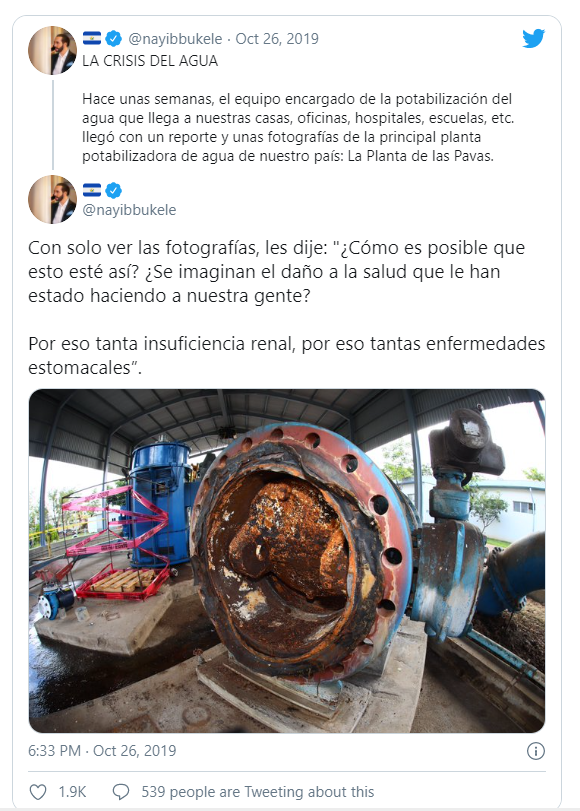 Bottled water as an emergency response
In the short term, the state, through ANDA, is distributing bottled water to the affected communities, along with water trucks. The government also planned on digging new wells in order to provide water and stop dependence on the Las Pavas Water plant. According to their official website, ANDA is also upgrading Las Pavas with new equipment. This is part of the government's new “National Water Plan“. On August 18, ANDA tweeted: 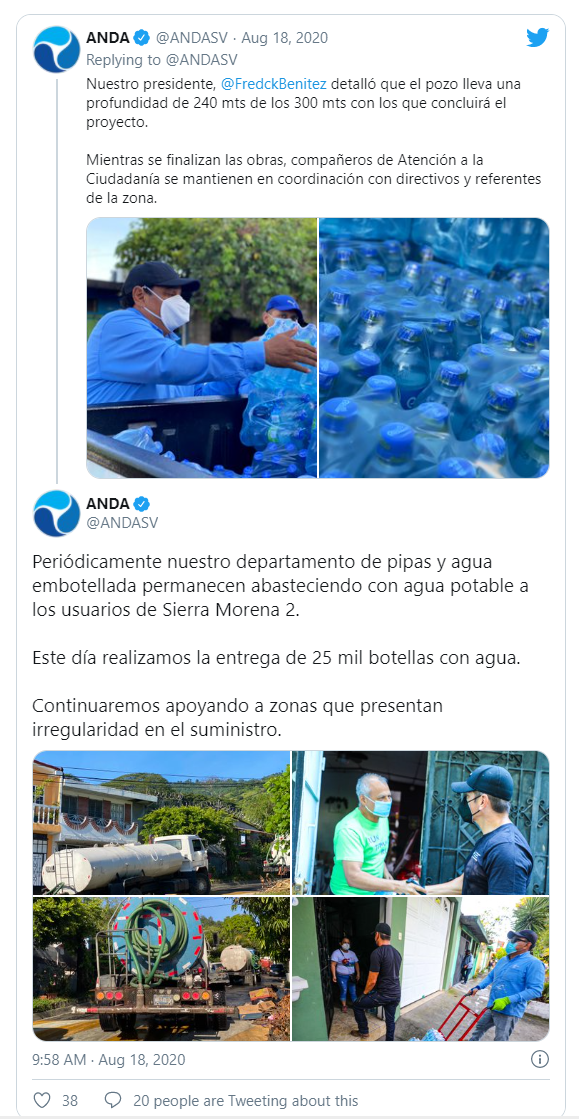 Periodically, our pipes and bottled water department continue to supply the users of Sierra Morena 2 with drinking water.
Today we delivered 25,000 bottles of water.
We will continue to support areas who have irregular water supply

However, residents from Colonia Altavista complained about the lack of service. Mendoza, who received bottled water, is one of the frustrated citizens. She said:

The water truck comes maybe once a month, which is not enough to survive the entire month. I am so frustrated and angry that I am considering leaving El Salvador once the pandemic is over. The only reason I haven't gone to the US is that I have young kids.

In January, President Bukele suggested reopening the 14-year-old debate about making access to water a human right and keeping its management in the hands of the public sector, thereby limiting its privatization. On September 7 and 8, a commission from the opposition-led Legislative Assembly started studying law proposals — perhaps in the future, thousands of Salvadorans will have running water to drink and wash their hands.