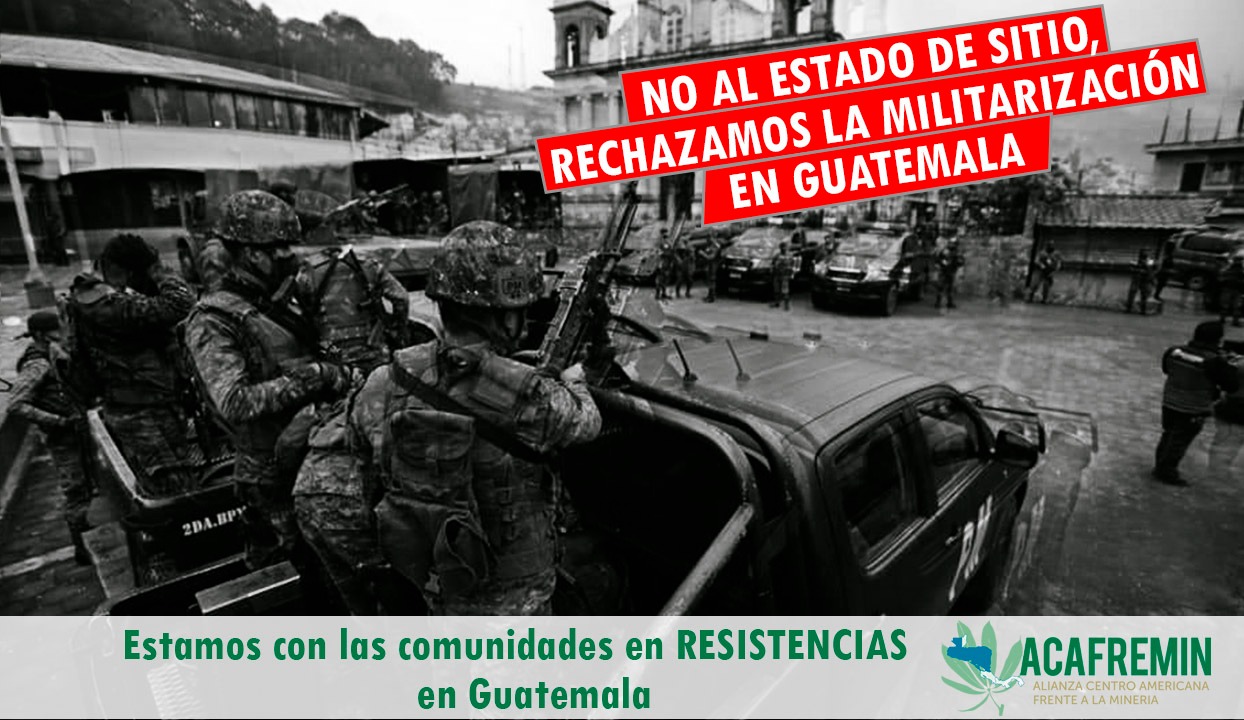 125 national and international organizations rejected the state of siege imposed by the President of Guatemala, Alejandro Giammattei. Executive decree 13-2020 restricts mobility and demonstration rights. In addition, this decree allows arrests and interrogations without warrants or any sort of justification.

The new measures will be implemented in the municipalities of El Estor, Livingston, and Morales in the municipality of Izabal, and Santa Catalina La Tinta and Panzós in the municipality of Alta Verapaz.
According to community leaders, the president's actions constitute measures of militarization, repression, and violation of human rights against the people of the aforementioned communities. The community leaders also assured that for no reason it is justifiable to establish curfews and controls restricting the constitutional rights of the population.

Instead, in a presidential statement, Alejandro Giammattei explained that the measures responded to counteract the violence of criminal groups, such as drug trafficking, organized crime, and illegal activities.
The Association of University Students "Oliverio Castañeda de León" and the Center for Legal Action in Human Rights (CALDH) believe that the state of siege responds to commercial and business interests such as mining.
"It is evident that the imposition of the state of siege does not seek to restore order and eradicate illegal activities. Rather, it has been imposed to adapt the productive, commercial and economic objectives of these sectors in a region that has historically struggled to save Lake Izabal from the effects of mining. Indeed, Mother Earth has been defended from the onslaught of an agro-industry that depredates everything for its benefit," as the two organizations expressed in a conjunct statement.
The suspension of the exploitation license of the Fenix ​​mine from the Guatemalan Niquel Company, a subsidiary of the Swiss firm Solway Investment Group, was ratified on June 19. Further decisions are suspended until a prior consultation based on the standards of Convention 169 is carried out. ILO. In addition, the Constitutional Court pointed out irregularities in the extension of the license, since the Environmental Impact Study presented by the company at the time of obtaining the license covered an extension of 6.29 square kilometers, while the Ministry of Energy and Mines authorized the exploitation in more than 247.9 square kilometers.
The Constitutional Court suspended the project in July 2019, when the Union of Artisanal Fishermen of El Estor filed a complaint with the Constitutional Court arguing that the exploitation permit granted to the mine in 2005 by the Ministry of Energy and Mines (MEM ) did not respect the due process of prior consultation of the affected indigenous peoples in four municipalities.
Julio Gonzáles, representative of the Madre Selva collective, pointed out that the intentions of the state of siege, promoted by large landowners, is to strip communities of natural resources.
"First, landowners who want to expel communities to exploit the land strategically for mining, hydroelectric, and monocultures in the northern areas of the country are the ones pushing for the approval of the state of siege," explained the environmentalist.
The organizations asked the deputies of the Congress of the Republic to reject the state of siege of President Giammattei. In addition, they called on the population to demand the unconstitutionality of militarization in the five municipalities and the president of the republic to guarantee the rights and physical integrity of environmental defenders.

Social and environmental leaders indicated that the state of siege, imposed by the president of Guatemala Alejandro Giammattei, is meant to benefit the mining, hydroelectric, and monoculture industries.