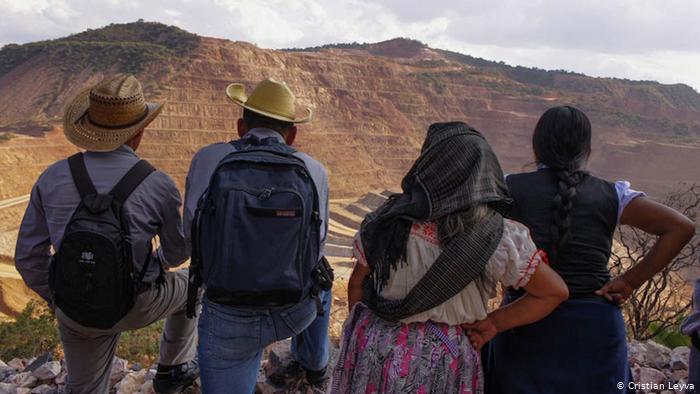 According to a study from the organization Voces Desde el Territorio and backed by 300 organizations, transnational mining companies are taking advantage of the Covid-19 pandemic to promote the industry and continue operating despite the restrictions.

Voces Desde el Territorio reviewed more than 500 notes, press releases, and mining reports that reveal that mining companies around the world ignore the threat of the pandemic and continue to operate. According to the organization, mining companies "even use the health emergency as an opportunity to cover up their blemished histories of destruction and present themselves to their workers as social actors and benefactors offering tests to detect the virus."

According to the 300 environmental organizations supporting the aforementioned study, the governments pressured by the lobby of the mining industry seek to silence the protests and use the current crisis to promote changes in national regulations that favor mining activities, at the cost of the lives of people and the planet.
Mexico entered the economic opening phase on May 18, when the different industries had to present a protocol on how they would open their operations. Since the mining industry was declared non-essential, mining companies in the territory had to close operations from the beginning of April, a period of suspension that had to extend until May 31. Yet, mining companies did not stop: “some suspended some of their activities, others continued working with a reduction of personnel, others stopped extracting gold, but continued to work in the leachate yards," says Pedro Canoero, of the Mexican Network of Affected for Mining (REMA), in conversation with Deutsche Welle. Pedro Canoero is a pseudonym. The activist has asked to keep his identity anonymous for fear of coercion by armed groups in the area.

Opposition to mining projects generates great violence and repression in the communities.

Golden belt, a calamity for communities
Carrizalillo is a community in the municipality of Eduardo Neri, in the center of the state of Guerrero, Mexico. These lands are located in an area that enjoys a peculiar and abundant wealth of precious metals. "The territory is crossed by a strip of approximately 100 kilometers long and 80 kilometers wide. Large mining companies with foreign and national capital have established themselves in the so-called golden belt," says the organization Environmental Justice Atlas.
The Los Filos full-cycle mining complex, which includes two open-pit pits, an underground extraction tunnel, and a 400-hectare leachate yard, is located in the area. Equinox Gold merged in March 2020 with Leagold Mining, making Los Filos one of the six mines it exploits on the American continent. Silver and gold are extracted in the mine, and there is an expansion plan. Thus, the inhabitants of the surrounding communities, Carrizalillo, Xochipala, and Mezcala fear that the violence they are experiencing will intensify, as well as the damage to the health of its inhabitants.
Equinox Gold reported in late May that 51 workers at the Los Filos complex tested positive for Covid-19. The company also reported that they had been isolated in quarantine. Still, the Mexican mining industry declared to be in a position to start operations since last May 17.

Aerial view of a mine in northern Mexico.

Carrizalillo, an example of what happens in the mines
Since the opening, the number of cases of Covid-19 has increased. "Among the unionized workers and those of the subcontractors in less than 15 days, there are 150 positive for Covid-19. In these small towns, some of these workers live with their families. Those who come from outside live in a separate house but they still live in the communities. A significant proportion of the workers are asymptomatic. The problem is that the virus jumps to the communities. In all the state of Guerrero there is no longer the capacity to receive seriously ill patients in hospitals, a situation that extends to practically all states," stated Pedro Canoero of REMA. In the case of the opening plan, the activist considers the government and companies irresponsible. "The government does not supervise the companies, it does not have the capacity to inspect their operations, even when there are spills or when the dams break. Thus, even less will the government be able to send inspectors to each company considered non-essential."
The German organization "Rettet den Regenwald", Salva la Selva, affirms that the main Mexican mining companies Grupo Frisco, Fresnillo, and Industrias Peñoles did not suspend their operations. "Ocampo Mining Tayahua, in the state of Zacatecas, a subsidiary of Grupo Frisco, owned by billionaire Carlos Slim, preferred to pay a fine to continue operating. At least two workers tested positive for Covid-19." Moreover, Salva la Selva warns that community leader Roberto de la Rosa Dávila, who insisted on stopping exploration at the mine, received threats from Grupo Frisco, and it is feared that he may be arbitrarily detained.
"Instead of respecting the need for people to remain isolated and safe in their homes, mining companies have seen the pandemic as an opportunity to position the industrial activity of mining as an essential activity. Their argument is that the extraction of minerals is necessary to manufacture respirators and medical instruments. However, there are raw materials available, without the need for continued exploitation. “Some 500 communities are affected worldwide, " expressed Guadalupe Rodríguez, spokesperson for Salva la Selva.

Buena Vista copper mine, in the community of Cananea, in Sonora. In 2014, this mine caused an environmental disaster of great magnitude when a spill of 40 thousand cubic meters of sulfuric acid occurred, contaminating the Sonora river, leaving it without drinkable water more than 20,000 people.

The key to the value of gold is due to its scarcity. The US Geological Society estimates that some 51,000 tons of proven gold reserves remain unexplored. To date, some 171 metric tons have been mined, which would fill two Olympic pools. In times of coronavirus, the value of gold has shot up to the highest level in the last 70 years, due to the uncertainty and instability of the markets, coupled with the lower supply due to the closure of mines in the majority of the countries.
Pedro Canoero from REMA explains that most of the minerals are linked to the great growth of industries, such as automotive, home construction, iron, lithium, in order to manufacture more resistant batteries. However, gold is the one that mobilizes the largest quantity of capital. "The governments buy gold to have it as a reserve, which occupies between 20 and 35% of the gold that is mined. Another significant percentage, between 30 and 37%, is the gold destined for jewelry. But it is also used in the manufacture of medical instruments, and increasingly of household appliances", Canoero highlights.
Computers, digital televisions, tablets, and smartphones have a large number of electromagnetic conductors, and gold is the best electrical conductor because it does not rust like other metals. "Apple released a few years ago the Apple Watch, a smartwatch that was 18 carats. In its first edition, a million copies were manufactured, which sold in less than a week. It was a success and in the second edition, they produced 2 million watches. Those 18 carats, in terms of extraction, means 3.8 grams of gold. In the Carrizalillo mine, 70% of the annual production that is exploited in a territory of 5,000 hectares, and that affects 22 communities, served to manufacture those 2 million watches. "

Gold mine in Venezuela. Exploration work near El Dorado, in the east of the country.

Social conflict and environmental damage
Canoero highlights that in Mexico there are 25,500 mining concessions that occupy 28% of the country's territory. In 31 of the 32 entities where they are located, there are conflicts of different degrees of tension. Canoero points out that the conflict begins with the announcement of a mining project, but it intensifies once the company arrives. "Not only do these companies bring rupture of the society and of the forms of governance, but they also begin to dry up springs, sources of fresh water, and other sources of contaminated water. The permanent dust generated by those gigantic mines that operate 24 hours a day pollute the air with heavy metals, lead, mercury, cadmium, manganese, and arsenic. People start to get sick very quickly, especially pregnant women. In Carrizalillo, of the 70% of the female workers who were pregnant between 2011 and 2012, 65% of them had abortions which resulted in the death of the baby, others were born alive, but with deformations, some died, and others have life-long injuries. For example, those babies were born without a part of the brain, or have no motor ability, or speech."
The study by Voces Desde el Territorio denounces this same existing situation in many other countries in the world. Violations by the mining industry during the health crisis spread throughout Latin America in countries such as Brazil, Argentina, Ecuador, and Honduras. More precisely, in Honduras, eight people who oppose an opencast iron ore mine in the municipality of Tocoa have been in prison since September 2019 on false charges.

The murder of activist Berta Cáceres continues with impunity. The intellectual authors are still at large.

"The mine is owned by the Honduran company Pinares Investment which is linked to the Facussé family. The Facussé family, one of the most powerful in the country, has investments in palm plantations which, plagued by conflict, have led to the murder of dozens of peasants," as stated by the organization Salva la Selva. In Honduras, the government of Juan Orlando Hernández, who imposed a 24-hour curfew and the suspension of rights such as freedom of expression and assembly, will introduce a new penal code to criminalize social protest and jeopardizes civil liberties on June 25.

"In the last 20 years, Honduras has been considered one of the most corrupt and servile countries to transnational capitals. The situation worsened after the coup d'état, due to its links to organized crime and the increase in corruption," as expressed by Pedro Landa, an activist of the Reflection, Research, and Communication Team (ERIC), based in El Progreso, Honduras. ERIC, part of the Society of Jesus, has a 40-year history in the country and is now seen as an enemy of the current government. Pedro Landa himself has suffered harassment and threats for his activism around mining and protecting the environment.
"For two reasons, companies are now more desperate to accelerate their investments. In the case of mining, mineral prices have increased in the world market and the loans they had for their investments are creating additional burdens for them. Since the population is more aware and more organized, due to the negative impacts that these companies generate, greater resistance has ensued," said Landa in conversation with DW.
The activist denounces the government of Juan Orlando Hernández for having created special battalions of the Army and the police. "He calls them Special Groups for the Resolution of Environmental Conflicts. We know that the police and the Army are the only way for the Government to resolve this type of conflict." Since the murder of Berta Cáceres on March 3, 2016, the number of murders of defenders of the territory, of indigenous peoples and of the environment has increased dramatically. According to the NGO Front Line Defenders, 304 activists were killed in Honduras in 2019. The number of cases has quadrupled since the murder of Cáceres. Moreover, the intellectual authors of said murder remain at large.