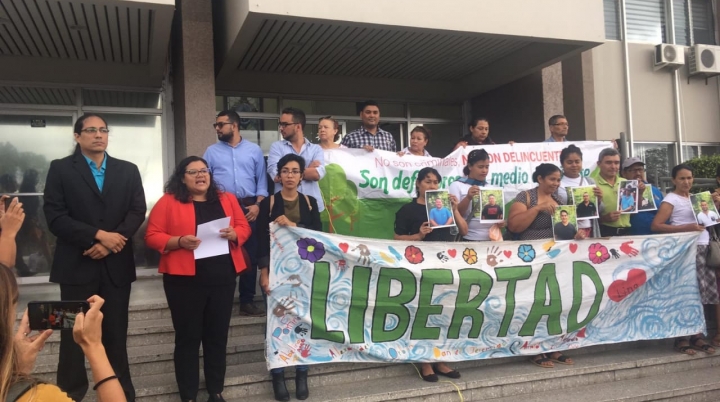 San José, February 27, 2020.- Today, the Center for Justice and International Law (CEJIL) argued before the Honduran Court of Appeals that the deprivation of liberty of seven defenders of the Guapinol rivers and San Pedro must be revoked, as this constitutes an arbitrary measure contrary to international human rights standards and guarantees of due process.

The Honduran Court of Appeals must resolve the appeals filed by the defenders' lawyers to review the imposition of preventive detention since September 01, 2019, after having been formally prosecuted for the crimes of aggravated arson and illegal detention. The process faced by the defenders resulted from a series of peaceful demonstrations carried out in the municipality of Tocoa, Colón, in order to stop the operations of the Los Pinares mining company and protect the Guapinol and San Pedro rivers from contamination.

Through of an amicus curiae brief, CEJIL presented arguments, based on international human rights law standards, to ask that the decision adopted by the Court guarantees the right to defend rights, the right to personal liberty, the presumption of innocence and due process.

According to the arguments presented by the organization, the complaint through a judicial process and, especially the imposition of preventive detention, were given with the purpose of undermining the peaceful protests carried out by the defenders, "thus seeking to generate fear among protesters and to inhibit the exercise of their human rights. "

In particular, as the Inter-American Court of Human Rights (IACHR), CEJIL has pointed out, preventive detention is the most severe measure that can be applied to the accused of a crime, for which reason it must be “exceptional in nature, by virtue of being limited by the principles of legality, presumption of innocence, necessity and proportionality, essential in a democratic society ”. In this sense, the rule should be the liberty of the person prosecuted while resolving their criminal responsibility.

The organization assures that the application of preventive detention in this case is arbitrary and without foundation, since it is not duly motivated nor is it the product of a detailed analysis of the circumstances of the case. This results in the violation of the guarantees of due process.

Likewise, CEJIL maintains that the application of the precautionary measure of preventive detention is part of the repeated pattern of criminalization against the defenders. In this sense, it is necessary to recall that IACHR has indicated, that “the criminalization of human rights defenders through the improper use of criminal law consists in the manipulation of the punitive power of the State by of state and non-state actors with the aim of hindering their defense efforts and thus preventing the legitimate exercise of their right to defend human rights. ”

In light of the standards set forth, CEJIL requested the Honduran Court of Appeals to issue a ruling in accordance with the aforementioned standards and, therefore, to revoke the precautionary measure of preventive detention ordered against the 7 water defenders of Guapinol to guarantee their rights according to the international obligations of the Honduran State.

In Honduras, defenders of the environment and territory are one of the groups that face the most violence, criminalization and impunity. This week, relatives of the defenders, the Municipal Committee for the Defense of the Commons of Tocoa, and national and international human rights organizations have mobilized within the framework of the "Meeting of the peoples for water", to demand freedom of the seven defenders.