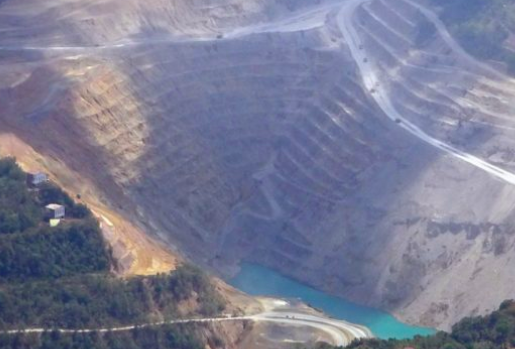 President Rodrigo Duterte has lifted a ban on issuing licenses for new mining operations in the Philippines, marking an about-face from a previous anti-mining stance that saw him ban open-pit mining in 2017 and close or suspend 26 mining operations for environmental violations.
The government says the industry, which contributed 0.76% to the country’s GDP in 2020, is important in resuscitating an economy bogged down by the COVID-19 pandemic, by generating revenue and jobs and contributing to Duterte’s flagship infrastructure program.
Duterte’s pivot in favor of mining goes back to 2019, when the government allowed the operation of suspended mining firms and pushed for the rehabilitation of government-owned mines, particularly nickel mines, to cater to Chinese demand for nickel.

The mining sector was the deadliest in the world for environmental and land defenders in 2019, according to Global Witness; the Philippines has the most mining-related killings that year, and activists warn the new order could further endanger defenders as well as open key biodiversity areas to mining.
MANILA — President Rodrigo Duterte has issued an order to lift a nine-year moratorium on granting new mining permits in the Philippines. The order is expected to ease the entry of at least 291 existing mining applications, escalating threats to the environment and its defenders, anti-mining and environmental groups say.

Signed April 14 and made public April 15, Executive Order 130 highlights the contribution of the extractives sector in reviving the country’s economy amid the COVID-19 pandemic.

The sector is expected to support important projects like Duterte’s flagship “Build, Build, Build” infrastructure program, which the government says is pivotal to economic recovery. More mining would also create more jobs, the government says, in the country with one of the highest unemployment rates in Southeast Asia. Some 190,000 people were employed in mining in the Philippines before the pandemic, according to data from the Mines and Geosciences Bureau (MGB).

While other sectors in the country have declined due to the pandemic and the lockdowns imposed in response to it, mining actually grew by 1.13%, driven mainly by nickel demand from China and a high gold price. The precious metal peaked at $2,000 per ounce last August and is expected to average at $1,700 this year as investors seek out a safe-haven asset.

A long stretch of conveyor belt transport nickel ores to mineral processing plant within the Taganito Mining Corporation (TMC) site in Surigao del Norte province, February 2016. Image by Ryan Dael of EITI via Wikimedia Commons (CC BY-SA 2.0)
While mining industry revenue contributed just 0.76% of the Philippines’ GDP in 2020, according to the Philippine Statistics Office, the government expects an increase in earnings from excise tax collections. It attributes this to the Tax Reform for Acceleration of Inclusion (TRAIN) Act passed in 2017, which “doubled the rate of excise tax on minerals, mineral products and quarry resources from 2% to 4%.”

The Department of Environment and Natural Resources (DENR) and the Department of Finance are expected to “formulate the terms and conditions in the new mineral agreements that will maximize government revenues and share from production, including the possibility of declaring these areas as mineral reservations to obtain appropriate royalties, in accordance to existing laws, rules, and regulations,” the executive order stated.

As the government anticipates a boon, anti-mining and human rights groups say lifting the moratorium on new mines will be anything but. They expressed dismay at Duterte’s executive order, which they say marks a complete pivot to a sector he condemned extensively in the early years of his presidency.

“President Duterte has completed his turnaround, from claiming to protect and stop the destruction of forests by destructive mining, to a pro-mining president,” Alyansa Tigil Mina (ATM), a coalition of anti-mining groups, said in a message to Mongabay. “Lifting the moratorium exposes this administration’s support for mining projects that will impact our water, food supply, forest, biodiversity, Indigenous communities and fragile island ecosystems.”

Rallying industry
When he assumed office in 2016, Duterte was outspoken in his opposition to mining, which he blamed for degrading the environment. He imposed a ban on open-pit mining in 2017 and appointed Gina Lopez, a staunch anti-mining advocate, as secretary of the DENR. In her one year in office, Lopez oversaw the closure and/or suspension of permits for 26 mining operations found in violation of environmental regulations.

By 2019, anti-mining groups noted that Duterte had gone quiet over mining, making no mention of the sector in his public speeches. That same year, the DENR’s MGB recommended the reopening of mines shuttered under Lopez’s watch, including the operation of the OceanaGold-operated Didipio gold mines in Nueva Vizcaya province whose permit lapsed that same year.

The Panian open pit coal mine in Semirara Island, central Philippines, March 2005. Image by TJCERAME – Wikimapia via Wikimedia Commons (CC BY-SA 3.0)
While Duterte’s policies on mining have caused instability in the sector, experts anticipated the domestic industry would rebound after neighboring Indonesia, the world’s biggest nickel producer, imposed an export ban on the metal in January 2020. The Philippines, the No. 2 producer, stepped in to fill nickel demand from China, exporting 333,962 tonnes last year.

Even amid strict government-imposed lockdowns that banned travel by land, air or sea, the mining industry was allowed to continue operating in the Philippines. This raised tensions with local governments, which wanted mining operations halted to curb the spread of COVID-19.

These government decisions boosted mining and oil stocks on the Philippine bourse. The sector closed 17.5% higher by the end of 2020, making it one of the biggest gainers amid the pandemic.

Duterte’s new order has had an immediate impact: Hours after he lifted the mining moratorium, the mining and oil index rose 5.38% by the close of trade on April 15.

Risk to environment, defenders
On the ground, various groups have warned that the executive order is poised to escalate threats to the environment and its defenders.

Mining was the deadliest sector for environmental and land defenders in the world in 2019, according to the watchdog Global Witness. That year, the Philippines topped the list of countries with the highest number of mining-linked deaths of environmental defenders.

Among the 16 fatalities that year was Datu Kaylo Bontolan, an Indigenous Manobo leader on the southern island of Mindanao, who was murdered after opposing illegal mining in his community in the Pantaron mountain range.

The Carmen Pit, an open-pit copper mine site in Toledo, Cebu in the central Philippines, April 2016. Image by P199 via Wikimedia Commons (CC BY-SA 4.0)
Displaced Indigenous groups in Mindanao have linked an ongoing government crackdown against them as cover to clear ancestral domain lands for mining companies, particularly small-scale Chinese firms with pending mining applications. Since 2000, Chinese investments in the Philippine mining sector have been channeled through “local elites in the artisanal small-scale mining (ASM) firms,” a study notes.

“This support to more mining projects will encourage more Chinese investments to extract nickel, black sand and copper minerals here in the Philippines,” anti-mining coalition Alyansa Tigil Mina said. “All these will only benefit Chinese demands and not Philippine industrialization.”

In Palawan province, one of the most biodiverse areas in the country, the order could potentially greenlight the operations of at least five mining applications, according to the Environmental Legal Assistance Center (ELAC). While the province is governed by a strategic environmental plan that bans mining, there has been an increase in mining applications, said ELAC executive director Grizelda Mayo-Anda.

“Existing mining companies which have been suspended … plan to expand their mining operations in Palawan,” she told Mongabay.

She added it’s especially alarming that these mining permits target areas of natural forest in the province, some of them within key biodiversity areas and protected areas.

“The DENR and the PCSD [Palawan Council for Sustainable Development] must be reminded that under the Strategic Environmental Plan for Palawan law (Republic Act 7611), all natural forests are areas of maximum protection or core zones,” Mayo-Anda said.

A large-scale mining site ni Dinagat Island. Mining contributes only a tiny proportion to the Philippines’ GDP yet this industry sees the most number of murdered environmental defenders in the Philippines. Image by Erwin Mascariñas/Global Witness
Leon Dulce, an activist with the Kalikasan People’s Network for the Environment (Kalikasan), said he was unconvinced the new order will uphold environmental protection, given that the country’s mining law gives permit holders complete access to natural resources within their concessions.

“The Mining Act provides auxiliary rights to mines that allow them to cut timber, deplete water, and ‘ease out’ communities away from their lands,” Dulce said in a message to Mongabay. “As part of its investment guarantees, the Mining Act commits government to ensuring the removal of obstacles to mining, and that includes conflicting land uses such as agricultural lands and communities.”

Dulce also noted provisions in the act that limit rehabilitation, such as token fines of just $1 per ton for companies disposing of waste in unauthorized areas, and similarly low compensation obligations for damage caused by mine waste and tailings. “That leaves all mines prone to ‘externalizing’ environmental costs,” Dulce said. “In other words, polluters will not pay.”