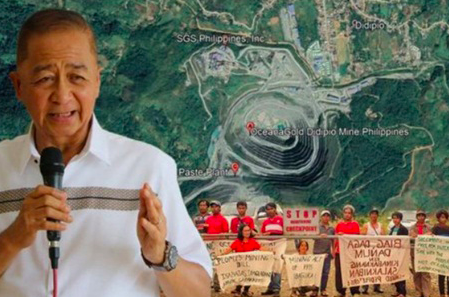 Nueva Vizcaya Governor Carlos Padilla on Friday reiterated his opposition to the renewal of the mining contract of OceanaGold Philippines Inc. in his province, saying even President Rodrigo Duterte expressed concern over the gold-copper mine’s resumption of operations. We strongly oppose the renewal of the FTAA (Financial and Technical Assistance Agreement) of OceanaGold. We believe that the protection of the environment is more paramount than the interest of OGPI,” said Padilla in a text message.

“No less than President Duterte expressed this concern when he visited Cagayan Valley immediately after typhoon Ulysses,” he added.
The governor was responding to the November 7 press release of OGPI, saying the firm will soon finalize the renewal of its FTAA with concerned government offices.

OGPI’s 25-year contract with the Philippine government to develop and exploit the minerals in Didipio, Kasibu town expired June 20 last year.
Residents of Didipio, supported by the local governments from the barangay to the province, put barricades up in July 2019 to prevent the company from operating after its FTAA expired. The action was instrumental in forcing the company to halt its operation back in October.
Padilla also issued a cease and desist order against the company in June 2019. OGPI refused to acknowledge the order and filed a petition before the local court to nullify the directive. On July 25, the local court upheld the order.

Meanwhile, the Bugkalot indigenous peoples community in the provinces of Quirino, Aurora, Nueva Vizcaya and Nueva Ecija claiming ancestral domain ownership over OceanaGold’s mining areas condemned the National Commission on Indigenous Peoples (NCIP) Region 2 office in Tuguegarao City for the “premature and baseless” issuance of a certificate of non-overlap (CNO) to the mining company.
The former headhunting tribe’s provincial chieftains and elders from the four provinces signed a petition questioning the jurisdiction of NCIP Region 2 office in its conduct of a field-based investigation without the Ancestral Domain Office (ADO) final decision.
This was over the tribe’s pending Certificate of Ancestral Domain Title (CADT) application over the areas where OceanaGold operates.
Rosario Camma, over-all chieftain of the Bugkalot tribe, said the issuance of CNO was “rigged” in favor of the mining company to expedite the renewal and approval of its expired FTAA by President Duterte.
On June 10, 2019, the FTAA of OGPI), a subsidiary of Melbourne-based OceanaGold Corporation, has expired resulting in temporary suspension of OGPI’s operations pending renewal of its license with the Office of the President.
Duterte also took notice of the pending application for CADT by the Bugkalot/Ilongot tribe over 12 villages including OceanaGold’s host village of Didipio.
This was apparently the reason for the non-renewal of OGPI-FTAA to support the IP community particularly the Bugkalot/Ilongot, who have been roaming these areas “since time immemorial” and whose names of towns, villages, rivers, creeks, forests, trees, among other were named by their ancestors.