As thousands of people marched in Cabañas demanding an end to metallic mining in El Salvador, individuals and organizations from Canada to Vancouver showed their solidarity with the anti-mining movement.

The Mining Justice Alliance of Vancouver sent the following greeting, and the Center for Environmental Advocacy of Panama sent a solidarity statement that can be seen here. 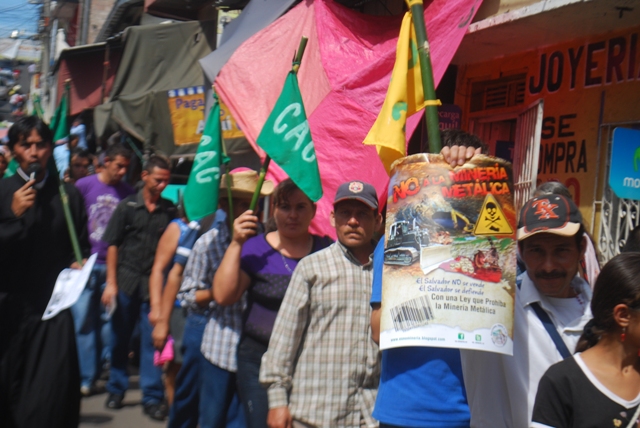 To the people of Cabañas, El Salvador

We write you this simple note as a gesture of our heartfelt solidarity in your struggle against Pacific Rim.

Pacific Rim has its headquarters where we live in Vancouver BC on the Traditional and Unceded Territories of the Coast Salish Indigenous Peoples.

Pacific Rim has its headquarters in the center of our city, and yet the people in Vancouver know very little about what teh company has done in El Salvador, and what they continue to do.

We are working to change this, and in the upcoming year we will be bringing the harms that Pacific Rim causes to the attention of people in Vancouver in public ways.

We honour all of those in El Salvador, as throughout the Americas, and across the planet, who fight for mother earth and all her people and creatures by resisting Canadian mining companies.

We know that people have been killed because of their work to stop Canadian mining companies, and this fills us with a great sadness and a powerful motivation to keep working.

We support you in solidarity from the north!

Let us build stronger connections between communities in the north and the south!

An end to the violence against the earth and people!

Power to the People!