On October 20th, thousands of people will be marching in El Salvador to demand their Human Right to water and demonstrate their opposition to gold mining.

Show your support for the communities affected by mining projects and the Salvadoran social movement by calling and emailing Canadian mining company Pacific Rim on Monday, October 22nd.

Background on the issue: 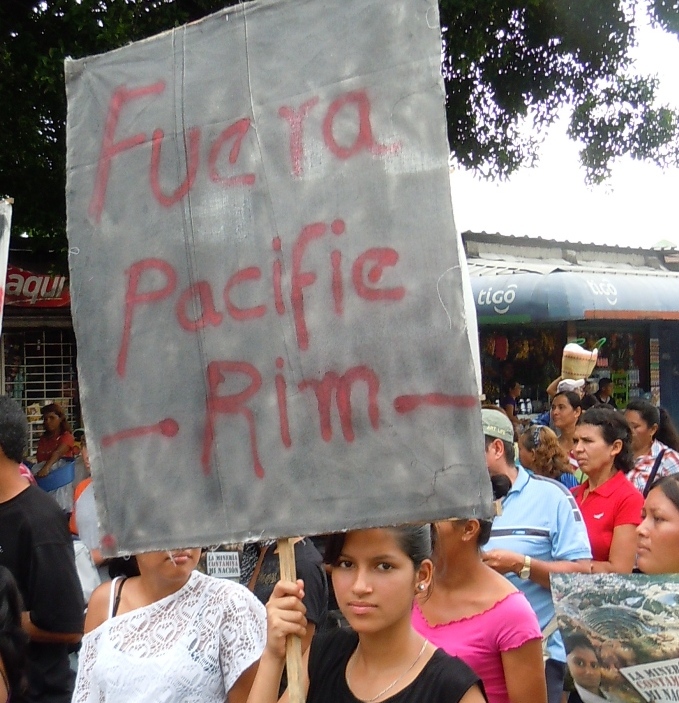 Metallic mining projects would pose a significant threat to the already taxed water supplies of El Salvador, as well to the environment and public health in this densely populated country. The civil society organizations and affected communities that make up the National Roundtable against Metallic Mining (the Mesa) have been struggling to stop metallic mining in El Salvador since 2006. The Mesa represents hundreds of communities and thousands of people throughout the country and includes environmental, community-based, research, legal and religious organizations.

In 2007, when the Salvadoran government began to put restrictions on the mining industry, as a result of the efforts made by the Mesa and other members of civil society, two multinational mining corporations, Commerce Group and Pacific Rim, responded by filing lawsuits against the government. The companies claim that their rights as investors are being violated.  Pacific Rim, a Canadian company looking to mine in the department of Cabañas, is claiming losses of up to $100 million.  On June 1st, 2012 a panel of three arbitrators hearing the case in a trade tribunal that is part of the World Bank ruled that the case would continue.

The controversy over Pacific Rim’s mining project in Cabañas has not come without a social cost.  To date four environmentalists opposing mining from the region have been murdered, and countless others have suffered through threats, attacks, kidnapping attempts and violence.  While the Attorney General’s Office in El Salvador has never done thorough investigations into the intellectual authors of the crimes in Cabañas, local residents say that community divisions and conflict started when Pacific Rim arrived and began promoting their mining projects.

The Mesa is fighting back against Pacific Rim and other companies in El Salvador by educating the population around the dangers of mining, carrying out scientific research to support their positions, and pressuring decision makers in El Salvador to protect the environment and public health.  The Mesa has presented a bill to the Legislative Assembly that would ban all metallic mining in El Salvador, the first of its kind in the world.

On October 20th, the Mesa  is organizing a march and rally in the town of the Pacific Rim office to show the people’s opposition to the presence of mining companies in their department and pressure decision makers to take actions that defend life and the environment.

You can take action by:

My name is ___________.  I am calling today to express my outrage at you company’s attack on El Salvador’s national sovereignty. Pacific Rim's attempts to mine in Cabañas and its ICSID lawsuit are infringing on the rights of Salvadorans to decide the future of their land and livelihood.

Last Saturday, thousands of people marched in El Salvador to oppose your mining project.  It is time your corporation accept responsibility for the damage you have caused in El Salvador and heed the call of the communities who are demanding a ban on mining and the withdrawal of Pacific Rim from El Salvador.

For this reason, I ask that your company:

-Immediately withdraw the ICSID lawsuit against the government of El Salvador

- Cooperate fully with the Attorney General's investigations into the murders of environmentalists Alicia Sorto Recinos, Ramiro Rivera and Marcelo Rivera

Thank you for your time.

2. Emailing the President of the Board of Directors

If you send an email or call please let us know by forwarding your email to stopESmining@gmail.com

I am writing to express my outrage at the attacks of Pacific Rim, of which you are the President of the Board of Directors, on the national sovereignty of the Republic of El Salvador. Pacific Rim has refused to respect the Salvadoran government's decision to deny mining extraction permits - a decision based on local community opposition and the company’s failure to meet their legal obligation prove that the project would not threaten to the environment and public health. The multi-million dollar lawsuit Pacific Rim has pursued against El Salvador is an unconscionable attack on a cash-strapped government which has shown admirable commitment to protecting the environment and its own people.

I am also extremely disturbed by the wave of violence against community activists who have opposed your company's presence in the region. Since Pacific Rim entered Cabañas, four anti-mining activists have been murdered in the area around the proposed mining project.

I call on you as President of the Board of Directors Pacific Rim as well as the rest of the members of the Pacific Rim board to:

* Immediately withdraw the ICSID lawsuit against the government of El Salvador
* Immediately withdraw Pacific Rim's operations from Cabañas and cease all efforts to mine gold at the El Dorado site
* Cooperate fully with the Attorney General's investigations into the murders of environmentalists Alicia Sorto Recinos, Ramiro Rivera and Marcelo Rivera