Solidarity from 3,000 Miles Away

Solidarity from 3,000 Miles Away

Last winter, when environmental activists and members of the community of San Sebastian heard about the struggles in Wisconsin to defeat legislation that would pave the way for sulfide mining in the northern part of the state, they sent a statement expressing their solidarity with the efforts. 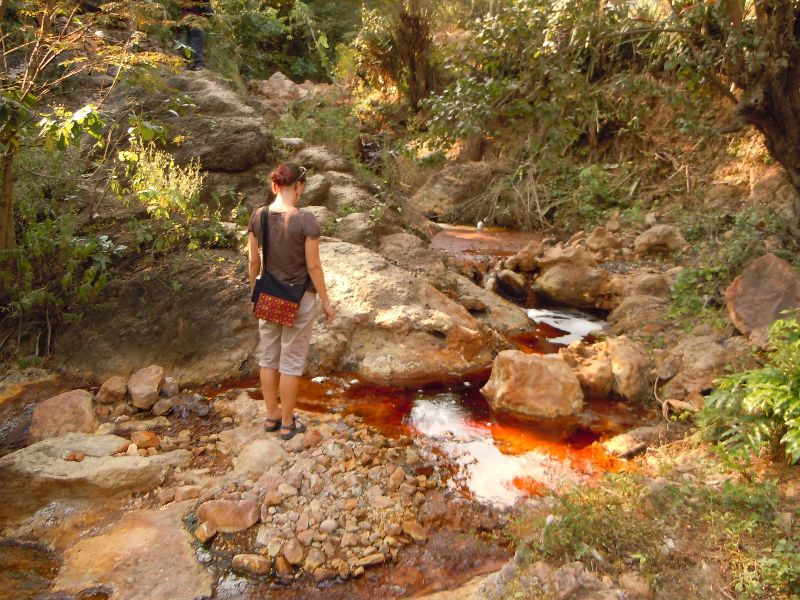 To the people of Wisconsin

Regarding protection of your water, your lands and your people

From the National Roundtable against Metallic Mining in El Salvador and the Social Pastoral Committee of the Santa Rosa de Lima Parish, El Salvador

In El Salvador, we understand very well what the impacts of mining are.  We have seen the effects of open pit mining on our neighbors (Guatemala and Honduras), and we have lived and suffered through the damages subterranean gold mining causes in our very own communities.  Water and soil pollution, acid mine drainage, health problems like kidney failure and cancer from consuming contaminated water, and violence as a result of the arrival of mining companies are not foreign concepts to us.   The community of San Sebastian, in the department of La Union, is confronting on a daily basis the consequences of more than one hundred years of mining.  A Wisconsin based company has been responsible for the mining project in that community since 1968.  When, finally, we were about to stop mining in San Sebastian, the company, Commerce Group, sued our government in an illegitimate World Bank tribunal for $100 million.

Mining companies come to communities promising employment, development and community projects, but the sad reality for our country, which has so many economic restraints and inequality, is that these promises are never fulfilled and their legacy is disastrous for water and life.  The companies’ arrivals divide communities and create social violence.  Who, better than us, can speak to this reality:  to the havoc wreaked by the lack of ethics and the voracity of gold mining companies.  These companies are cutting down the very branch they are perched on, that is to say, finishing off our way of living.

We are facing a challenge of life or death.  Our contribution is to prevent that you, in Wisconsin, are caught in the talons of companies that only think about profits, so that you do not regret it later.  We don’t want any community, any people, to suffer what we are suffering in San Sebastian because of mining.   We have to struggle for the rights we have as human beings, and our right to live in a health community has been violated.

After seven years of struggling against metallic mining, we are convinced of the importance of laws that protect the rights of people to access water and to a healthy environment over the economic interests of mining companies.  We have witnessed the way in which mining companies try to eliminate legal or institutional restrictions, by forcing laws that threaten the sovereignty of the people.  Here in El Salvador, we are denouncing gruesome Free Trade Agreements and promoting a law that would ban metallic mining because we believe that these are best ways to protect ourselves from pollution, the destruction of natural resources, and the social conflicted created by massive mining projects.

As the National Roundtable against Metallic Mining in El Salvador, as part of the struggle against the extractive model in our country or any country in the world, we show our solidarity with the struggle for life and culture of our brothers and sisters in Wisconsin. We are convinced more than ever that the number of voices are growing of those who demand political and environmental policies that respect the sovereignty of communities to decide the way in which they want to build their own destiny.  We are pleased and excited by the strength the people of Wisconsin are showing because together we are telling the world that human and environmental rights are non-negotiable and we will do everything within our reach to ensure they are respected.

The people’s right to water is worth more than profits for a few.  Let’s make our resistance grow:  No to mining. Yes to life.

To the people of El Salvador

From the Bad River Ojibwe Tribe

From our sovereign shores of Anishinaabeg-Gitchigami, the Big Water, we also understand what the risks of mining can be.  We, too, have witnessed the effects of open-pit mining on our neighbors (Minnesota and Michigan) and now watch that same dark cloud gather on our own horizon.  Fugitive dust emissions carried on the wind, toxic mercury making our fish unsafe to eat, sulfate discharges exterminating wild rice, and mine wastes leaching into the groundwater.  These effects, not prosperity, are the true legacies left by mining.

Now, a Florida-based company has enticed Wisconsin’s State Government to privilege mines that could result in similar ecological devastation, widespread pollution, and a disproportionate risk to the social, cultural, and economic integrity of northern communities.  As has too often been the case, these outside corporate interests have offered empty promises of employment and half-truths of wealth to manipulate the public and State leadership.  It has divided our neighbors, our towns, and our elected officials.

But, we have taken a different path.  As responsible people, we have not looked to outside corporate interests to inform the management of our people’s air, lands, and water.  Rather, we have looked to our elders, our children, our teachings, and science to better understand the risks and incentives associated with mining.  We have shared this information with our community, our neighbors, local governments, and State officials.  We have hosted a scientific conference open to all —including mining proponents.

We have sought a path of truth-seeking and transparency.  If such things are in opposition to mining, then we stand a Sovereign Nation opposed to mining in the Penokee Hills and the legislative maneuvering of corporate interests.  We hope that our struggle will illuminate the issue of mining impacts on the resources of indigenous and rural communities across the nation, and across the planet: Rio Tinto’s tunneling into the culturally-significant Migizi wa sin (Eagle Rock) for nickel and copper, the half-of-a-billion tons of Michigan copper mine tailings discharged historically into Lake Superior1, the 160 square miles of Lake Superior’s lake bed covered by Reserve Mining’s taconite tailings2, the sulfate levels chocking out wild rice in the St. Louis River of Minnesota3, the dozens of  air and water quality violations throughout Michigan and Minnesota since 20044, the 9,000-15,000+ miles of streams affected by Acid Mine Drainage around the country5, and the plight of the El Salvadorian people and the callous actions of the Commerce Group in that country.

We stand beside the people of El Salvador today and let them know that our voices have been added to theirs.  It is our belief that governmental decision makers, laws, and public policies should respect that: “the right to clean air, land, and water for the people is worth more than profit to the powerful.”

4) Sierra Club. 2011. The Environmental Track Record of Taconite Mining: A Fact Sheet on the False Promise that Iron Ore Mining is Safe.  2 pgs.  Available at: wisconsin.sierraclub.org/PenokeeMine.asp