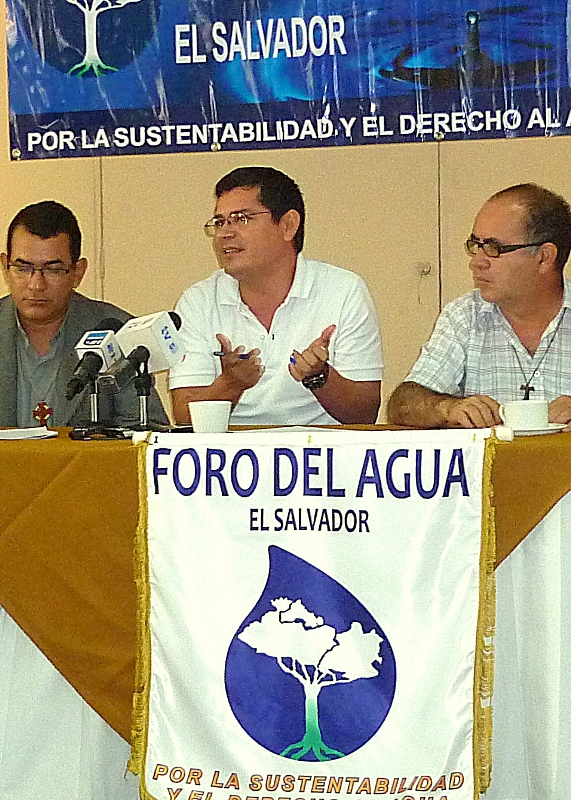 Today, sitting beneath banners that read “For sustainability and the Right to Water” the Water Form of El Salvador held a press conference to express their disapproval for the Mining Suspension Bill presented by the Executive Branch of the Salvadoran Government, as well as their support a bill that would definitively ban all metallic mining in El Salvador.

The Water Forum criticized the fact that the Government’s bill is only a temporary solution to the debate around mining and said that by not addressing this problem and by allowing mining, the Salvadoran government would be condemning future generations to an irreversible legacy.  According to a representative from JPIC (member of the Water Forum) “the government is not listening to the Water Forum’s outcry” in demanding respect for the human right to water.

They also emphasized that “this is not the problem of the government in power, this is a national problem.”

Below is a translation of the Water Forum’s press release.

El Salvador, whose national territory is approximately 20,935 km2, has 300 main rivers, according to the River Water Quality Report of 2011, published by the Ministry of the Environment and Natural Resources (MARN), of which only 10% of the water quality can be classified as “good” and where the other 90% is classified as average, poor or terrible.  There are is no water that can be classified as excellent.

In addition to the serious situation of contamination of our rivers, mining exploration and exploitation projects pose a threat to the life of main bodies of water in the country:  the Guija Lake, the Lempa River, the Paz River, the Torola River, and the Goascoran River, among others.

On August 7th, 2012, the Ministry of the Economy and the MARN presented a bill called the “Special Law for the Suspension of Administrative Procedures Related to Metallic Mining” in the Legislative Assembly.  In response to this situation, the organizations, churches, and communities that make up the Water Forum CONSIDER:

a) That the impacts of metallic mineral exploitation in our country cannot be addressed by improving administrative procedures.  This is a problem that is tied to our country’s small size, the population density, the location of proposed mining projects on our main bodies of water, the irreversible damages caused by the mining industry and the level of environmental fragility of our country.

b)  That trying to overcome the threat mining projects pose with an initiative like that proposed by the Executive Branch, can only be seen as a desperate attempt responding to the central government’s need to keep its promise of not allowing metallic mining projects during its term, with out addressing the fact that this is not a definitive solution for the problem.

In response to the aforementioned factors, WE STATE:

1.  Our complete disapproval for the bill presented by the Executive Branch, because it is only a temporary solution and not a definitive ban on mining projects in our country.

2.  We call on the Legislative Assembly to urgently resume the analysis, and discussion and approve the Mining Bill presented by the National Roundtable against Metallic Mining in November 2006.

3.  We demand that the Legislative Assembly have a transparent discussion around the revision of the proposed mining bills, during which the respect for the human right of the Salvadoran population prevails over the economic interests of the extractive industry.