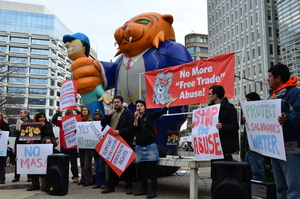 Salvadoran environmentalists are fighting for a ban on destructive mining projects in the face of physical attacks at home, and legal attacks from abroad authorized by a U.S. trade agreement.

Since 2009, community leaders, staff of a local radio station and a priest have been threatened, assaulted, or intimidated for their efforts to protect El Salvador’s water, natural resources and livelihoods from harmful mining projects.

The latest outrage occurred on January 20, 2012.  Father Neftalí Ruiz, a leader of the anti-mining movement, allowed into his home three young men who said they were interested in social work. Once inside, the men tied up his hands and feet. They searched his computer and went through his possessions. They stole his laptop, cell phones, and an external hard drive: all presumably containing information related to the anti-mining movement.  The men did not ask for money.  According to Father Neftalí, they maintained communication with a person who appeared to be directing the search of his home….