The Crime in Cabañas

Between August and December 2009 at least five people were assassinated in events related, in one way or another, with mineral mining extraction in the department of Cabañas.  Journalist and police reports present the facts as possible disputes between neighboring families.  However, in some cases, heavy arms and military ambushes were used.  Up until now almost all these crimes remain unpunished and there is only one suspect detained.

Mountain paths, with many treacherous turns.  A cloud of dust surrounds the entire terrain, which winds steeply uphill.  The school tells the name of the place: “Educational Center of the Cantón of La Trinidad”, Sensuntepeque a department of Cabañas.  From the heights, the majestic and serene Lempa River can been seen. 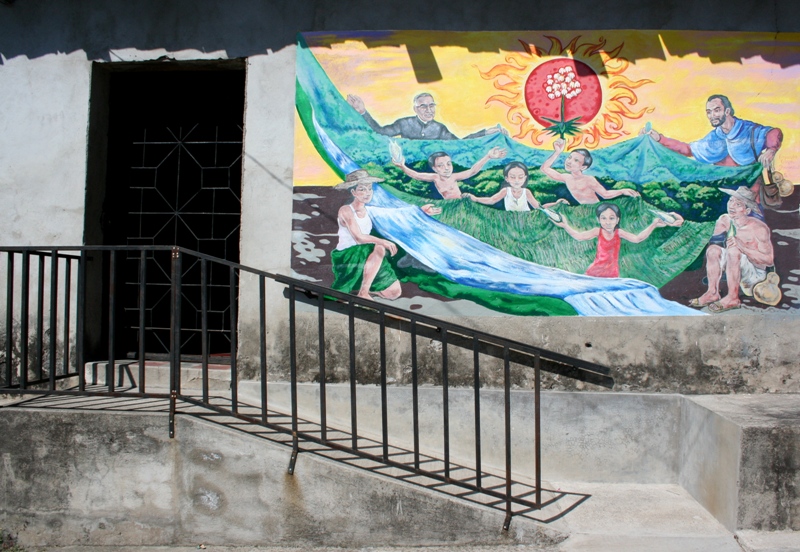 The people’s friendly greetings from their homes make one think of a peaceful community, “and that’s how the place was.

It was a very calm community, we didn’t have a single problem with the neighbors, we all got along well,” commented María, a member of the community of Trinidad.  María is a fictitious name, she agreed to give her account on the condition that she retains her anonymity.  “I’m afraid for my family, which has already suffered a lot due to this problem,” she declared. The “problem” which María refers to is mineral mining.  “It all began when the [Canadian mining] company Pacific Rim entered the region, around 2006, and we began to reject their presence, because we realized the it was something harmful to the community”, she remembers.

But the story begins years before and in another place in the same department of Cabañas, as explained by Francisco Pineda, resident of the municipality of San Isidro, Sensuntepeque, member of the Environmental Committee of Cabañas (CAC) and the National Round Table Against Mineral Mining, “On April 30th, 2004 the Viejo River dried up, [at the height of Cantón Llano de la Hacienda].  We discovered that the river above the Green Zone tourist center was collecting water.  Up further a water pump system owned by Pacific Rim was found, and it was taking water for mining exploration, because they use a lot of water to lubricate the pipes.”  At that time approximately 3,000 inhabitants of the municipality of San Isidro were affected. Due to the lack of attention by the ARENA mayor, Ignacio Bautista, the inhabitants arrived at the Attorney General of the Environment's office denouncing Pacific Rim and the first news appeared in the media. The water ran again through the Viejo River.

Pacific Rim has a permit for exploration given by the then minister Yolanda Mayorga de Gaviria, during the Saca administration. For Luis López, lawyer for the National Round Table Against Mineral Mining, in the case of Trinidad, the population is evidently against the installation of the company in the region. “Simply put if the people do not want it, the company can not enter. And the people do not want it. “

López explains the particular interest of the Canadian company in this region: “Trinidad is literally a gold mine. According to the company's impact study, there are 118 grams of gold per ton of rock.  Two grams of gold per ton is worth extracting.”  Pacific Rim's official web page dedicated to El Salvador reports that “the gold deposits of El Dorado exist in veins whose total reserves (measured and indicated) are 1.1 million ounces of gold and 7.4 million ounces of silver”. Before the world financial disaster, an ounce of tray gold was worth less than $500, USA, now it costs $1135, with a tendency for upward acceleration.

President Mauricio Funes assured on January 12 that his government will not support or authorize mining extraction projects in this country. Never the less, the affected inhabitants demand a clear and precise law that prohibits all mineral mining extraction in El Salvador from the authorities.

In reality, for the Canadian company, the issue would not be more than an economic question and speculation.  Although gigantic by Salvadoran business standards, Pacific Rim is a relatively small company in the multinational mining sector and does not have sufficient capital to wait five or ten years until a government more favorable to international interests approves extraction. The Canadian company would sell those lands to an even stronger company, capable of waiting the necessary time in order to snatch up those riches.

The thing that would really affect its interests would be a law that would definitively impede such extraction. According to how the company’s legal representation explained themselves before the international arbitration tribunals, but over all, the pressure that it exercises in El Salvador is toward a population that is among the poorest in the country and that is subjected to constant promises of hundreds of jobs in the case of approval for extraction in El Dorado.

Naturally, the opposition to mining in the region is not unanimous. Some sectors of the community have believed the arguments of the company.  The result has been the irreconcilable division of a society that, until the appearance of Pacific Rim, lived not only in peace but in harmony and friendship. Today, the clashes happen inside the same families.

Neftalí Ruiz, a young deacon of the Church of the Magnificent, gave testimony to that division.

He has visited the Trinidad since 2006, first as a reporter from Radio Victoria and afterwards in 2008 as a member of a religious order. “The community breathed an atmosphere of peace and harmony. People dialoged, we conversed with them until the mining company appeared and families began to divide themselves and until many much graver problems appeared.

The chain of crimes

The first death attributed to the mineral mining conflict was the disappearance and later murder of Professor Gustavo Marcelo Rivera in the municipality of San Isidro in June 2009. Rivera was a well known leader against mineral mining, a member of the departmental board of the FMLN in Cabañas and president of the local Casa de Cultura. He had had many run-ins with the mayor of San Isidro, Ignacio Bautista.

Marcelo disappeared on June 18 and his body was found on the 30th of the same month with obvious signs of torture in an abandoned well. The police report blamed the murder on gangs with the intention of robbery.  The contradictions in the investigation of the case appear evident. According to Francisco Pineda “The autopsy says that Marcelo died from a hammer blow to the head and the police claim that he died due to a gun shot to the head.  The autopsy also indicated that he had been dead for four days.”

In relation to this case, Luis López added facts, “On June 16, 2009 the FMLN presented a reform proposal of seven articles of a mining law for the prohibition of the extraction of mineral mining, especially gold and silver and the definitive closing of those mines that are in operation for a maximum period of 180 days. Two days after this piece, that directly affects mining extraction, was presented, Marcelo was kidnapped and murdered.”

As recounted by Francisco Pineda “On July 27 we received (Neftalí Ruiz, el Padre Luis Quintanilla (of Radio Victoria) and Pineda) a message which said if we did not keep our mouths shut, what happened to Marcelo would happen to us.”  December 20 four men armed with M-16 weapons ambushed Ramiro Rivera, member of the Committee of the Environmental Association of Cabañas in Defense of Water and Culture, 200 meters from his house in the community of Trinidad. Traveling together in the pick up with Ramiro were two neighbors, Felicita Echeverría who died in the attack and another youth who was wounded although her life was saved. In the truck's bed were two agents from the Division of Victim and Witness Protection of the National Civil Police. They were unharmed. Rivera was under constant police protection since suffering his first attack where he received eight shotgun wounds. In that attack he recognized one of his attackers as Óscar Menjívar, a local ARENA activist, friend of the mayor of Sensuntepeque, Jesús Edgar Bonilla and of other ARENA leaders of the region, as well as being a recognized promoter of the Pacific Rim Company.

Menjívar is the only one detained until now, not because to the murder charges but because of the first attack against Ramiro Rivera. He was also responsible for a machete attack against another environmental leader from Trinidad, Santos Rodríguez, who lost a finger and suffered various wounds in his right hand. Rodríguez was the victim of murder attempt on December 20, the same day that they murdered Ramiro Rivera. He now has police protection.

Six days after the murder of Ramiro, Dora Alicia Sorto, Santos Rodríguez's wife and member of CAC was murdered. She was 32 years old and 8 months pregnant. She was murdered by a man who was alone, a hit man who suddenly appeared from behind in the middle of a deserted paved street that she was climbing with her children toward her house. Her 2 year old son, whom she was carring in her arms, was wounded in the leg. Dora was murdered barely 200 meters from the police post.  According to statements from the neighbors, despite the recent murder of Rivera, the police did not appear to pay attention to the shots.

On January 12, 2010, president Mauricio Funes promised to investigate the crimes in Cabañas. “We promise the environmentalists that we are going to shed light on the human loss caused by to the environmental struggle,” he affirmed. Nevertheless, the investigations of the National Civil Police do not appear to bear fruit.  Nor have there been arrests due to the threats. Meanwhile the attorney general is being strongly criticized by his slowness in carrying forward the case.

There is talk of powerful economic sectors interested in mineral mining buying people off, as well as talk of political interests from the parties on the right, both in the municipalities in Cabañas as well as in the legislative assembly, being suspected of having links with narcotic traffickers, the military or paramilitary who could have participated directly in the murders.

There are two other dark cases also waiting without resolution that are not necessarily related to mining:  That of the parents of the currently detained Óscar Menjívar. His father, Horacio, was murdered in his house in the community of Trinidad on April 9, 2009. His mother, Esperanza Velasco, died October 8 in the same place. Three people fired rifles at the woman and fled without a trace.

It is essential that justice be done in all the murder cases related to the defense of the environment in Cabañas. Those who are the material and intellectual authors should be detained. On one side or the other, the community has placed blame for the murders but the other crime continues unpunished: the crime of mineral mining. As long as our country does not have legislation that that clearly prohibits this activity of contaminating and destroying communities, the social and ecological crimes will continue unpunished in El Salvador.