New Threats and Intimidation towards Mining Opponents in Cabañas

Another case of intimidation towards anti-mining activists in Cabañas was reported by the Environmental Committee of Cabañas. Below is a translation of their description and call to action.

The Compañera, Maria Graciel del Carmen Funes, member of the board of the Environmental Committee of Cabañas (CAC) on February 17, 2012 went to a parents meeting at the San Francisco El Dorado School in the municipality of San Isidro in Cabañas.  During the meeting Julio Eduardo Rodriguez spoke about the construction of a wall around the perimeter of the school, and he said it was being financed with funding from Pacific Rim, which was interested in mining for gold in silver in the area.  He said that if someone disagreed with the project, that they should say so at that time, and that is when Graciela Funes said that she disagreed because of the damages that that company had done and could do in the future.  She was then questioned by teachers from the school (Ana María Segovia, Sandra Rivas, Maritza Juarez, Marta Lilian Sigaran and Julio Eduardo Rodriguez) who also told her it was her fault the mining project was not being carried out.  They provided the space for other students’ mothers and fathers to verbally attack her and it almost got to the point of physical attack.  At that point she asked one of the teacher’s advisors (named Merino) to intervene but what he wound up doing was congratulating the rest of those present for the project they were planning with Pacific Rim funds.

This is another example of how the mining company uses money to divide communities and how ministry of education officials, specifically from that school, are contributing to this conflict, without worrying about the fact that they are putting the life of a mother at risk.  After the meeting, Graciela has been followed and surrounded by people of questionable reputations, and she fears for her life.  The education employees are also ignoring statements made by the President in which he stated that no government institution should accept funding from private businesses.  Today, it is once again made clear that mining companies continue to create problems in communities and that is how violence is carried out in Cabañas.

•  We call on the Ombudsman for Human Rights Office to pay close attention to these new acts of violence against our compañera.

•We demand that the Minister of Education look at this case and not allow that teachers become involved in these mining company projects, because this creates conflict in the communities.

• We demand that the Attorney General’s Office and the Civilian National Police pay attention to these new actions against environmentalists in Cabañas and that they provide protection for their lives.  Also, that the rest of the cases that have been left in impunity are clarified because the impunity gives way for more cases of violence in Cabañas.

• We ask that national and international organizations pay attention to the situation that we are still facing in our department, a situation that puts the life at risk of those who are defending life.

• As an Association we would like to be clear that in spite of everything that has happened (threats, intimidation, and even murders) we will not stop in the struggle that we have begun and that we are willing to give everything to defend life and the environment. 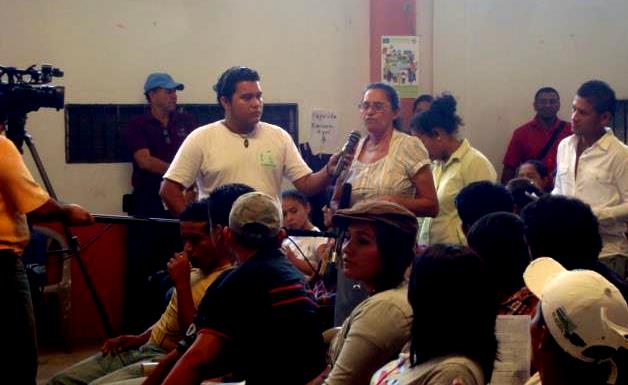