Monday March 5, the National Roundtable against Metallic Mining in El Salvador (The Mesa in Spanish) together with the Ombudsman for Human Rights Office and the Association of Participatory Radios and Programming of El Salvador (ARPAS) organized a forum for candidates running for the Legislative Assembly to discuss a mining ban in El Salvador. 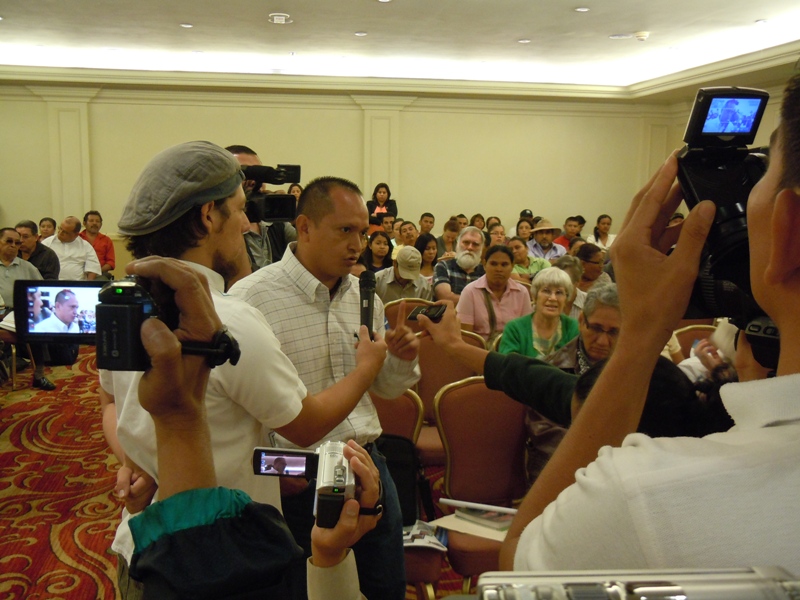 Candidates from four political parties and one independent candidate participated in the forum.  The parties represented were the FLMN, the PNL, the CN (formerly the PCN), the PP, as well as independent candidate William Huezo.  The ARENA party had confirmed their participation but did not show up.  GANA and the PDC never responded to the invitation.

Over 200 participants packed into the conference room for the event, which began with presentations by the Ombudsman for Human Rights, Dr. Oscar Luna, as well as Dr. Angel Ibarra in representation of the Mesa.

The forum got exciting when the candidates were invited to speak for 10 minutes on whether their party supported a banning mining in El Salvador or not.  The only parties that definitively came out for the ban were the FMLN and the PNL (even though the PNL’s support was stated during the question and answer period by the coordinator of the party who was in the audience and not by the panelist candidate during his presentation).  Taking their surroundings into account, the other candidates gave lip service to the abuses of transnational corporations and the need to protect natural resources while being sufficiently vague on the issue of legislation so as to not give a specific position on the ban. 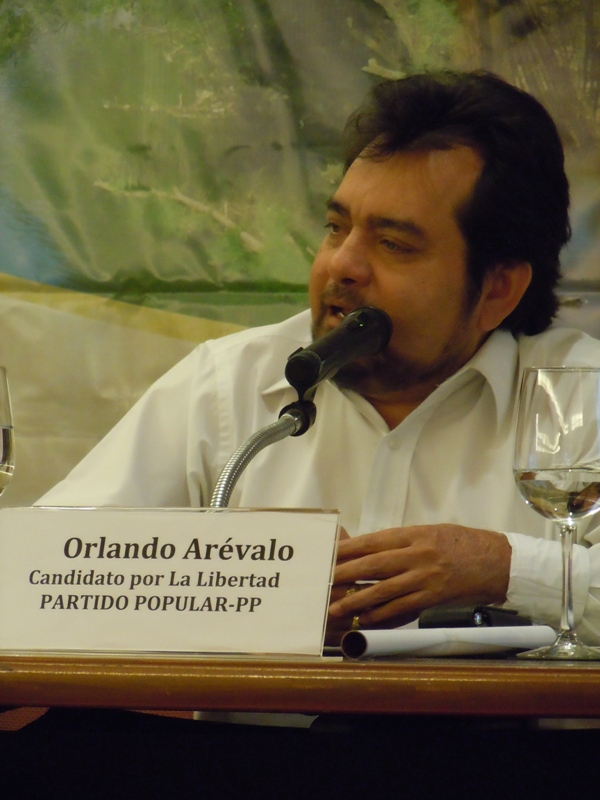 Things started heating up when it was Orlando Arevalo’s turn to speak.  Rep. Arevalo has played important role in mining history in El Salvador and was the Representative who introduced the bill on behalf of the mining companies to ease mining restrictions El Salvador.   At the event he said he now recognizes the dangers of mining, but that all the developed nations depended on mining to come to wealth.  He also said that in life there is “your truth, my truth and the real truth.”  His solution for the mining issue is that El Salvador needs to pass a constitutional reform that would allow referendums.  Then there should be a referendum on population’s opinion on a mining ban.  He said he would not vote on the issue until the people had been consulted.  When questioned about the bill he presented in 2006, he said that he didn’t introduce it because it was his personal belief, but because he was representing his party as a whole, a statement which received jeers and laughter of disbelief from the crowd.

After some scathing questions from the audience, mostly directed at Rep. Arevalo, Lourdes Palacios from the FMLN ended the event by reminding Orlando Arevalo that he was the head of the Environmental Commission when the anti-mining bill was introduced and that he cannot erase his history.  She also reminded the candidate from the CN that his party was the party that drafted and presented the pro-mining bill (Orlando Arevalo recently split with the CN and formed the new party he was representing at the forum) and that even if the CN candidate recognizes the harm mining causes, his party will dictate he acts according their historically pro-mining mandates.

For Spanish coverage of the forum visit the Mesa’s blog, Equilibrium.com and Contrapunto.

Photo gallery of the event.

In Cabañas, the Commité Ambiental de Cabañas and ASIC organized a similar forum directed specifically at the candidates from the department.  Below is a translated article about the event. 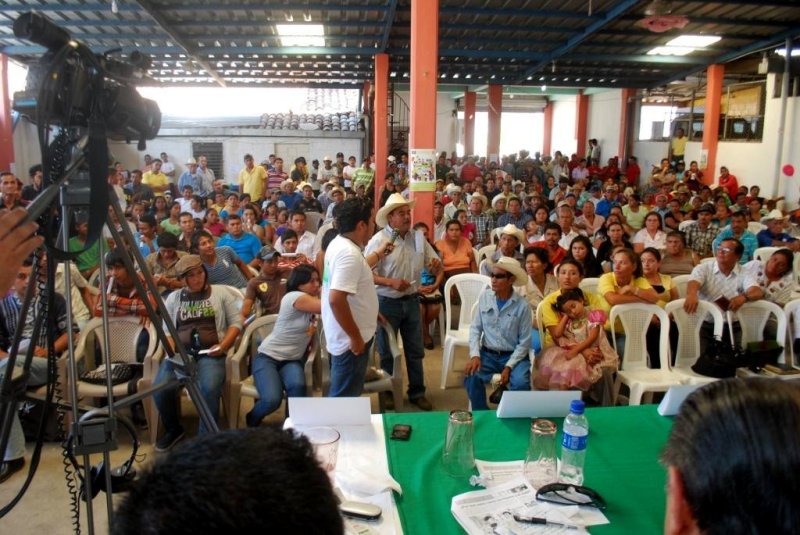 On Saturday February 25, the Environmental Committee of Cabanas in Defense of Water and Culture Association (CAC), with the support of the United Social Movement of Cabanas- Jose Benjamin Ayala and the Association Friends of San Isidro Cabanas (ASIC) held a forum called “The Electoral Agenda and Laws to Protect the Environment”  and invited all the candidates to the legislative assembly from the department of Cabanas from all the political parties.  The goal was learn about the proposals of each candidate with respect to the environment and their stance regarding the “death projects” like mining, as well as the bill that is stuck in the legislative assembly that aims to definitely ban metallic mining in our country.

The forum began with a speech by the president of the CAC, Francisco Pineda, who explained the goal  of said forum.  After, the representative from the Ombudsman for Human Right’s Office (PDDH in Spanish), the Assistant Ombudsman for the Environment Yanira Cortez Estevez spoke about the stance of the PDDH regarding mining and was clear that that organization is on the side of those who are struggling against those projects.

It is important to mention that of the six candidates who were invited, five participated (FMLN, CN, CD, PES, and ARENA) .  The only party not represented was GANA.  The first candidate to present his proposal was from the Cambio Democratico (CD), Benjamin Lopez, who said that once elected to the legislative assembly he will pass laws that benefit the majority of the population, and forget about party lines.  He was also clear that he was against mining. Antonio Echeverria, candidate for the FMLN, said that representatives should support the law to ban mining because it has been scientifically proven that our country isn’t suitable for mining.  Next it was the candidate from Conceratcion Nacional, Luis Urías´s turn to speak.  He emphasized mining in his presentation but also focused on support for farmers, promoting dignified housing for those people living in extreme poverty, and said that the CN would promote laws that would revert the process of environmental degradation in El Salvador.  Guillermo Guevara, from the Partido de la Esperanza, said that his work is based in the social doctrine of the Catholic Church, which entails respect for the dignity of human beings and the constant search for common good.  His legislative proposal has the goal of carrying out public policy for reforestation in the department which would in turn promote a culture of natural disaster and vulnerability mitigation in the face of climate change, specifically providing protection for the aquifers of the region.  The candidate for ARENA, Carlos Reyes, based his presentation on the fundamental issues which are the center of his party’s platform, like public security and education among others, but he said little or nothing about the environment or what he will do once elected. 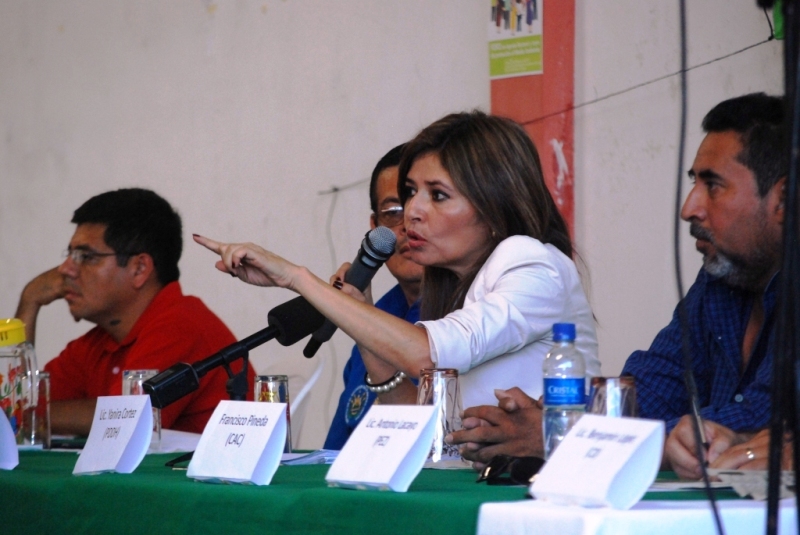 The activity was a success for the organizers because many expectations for the event were met.  Firstly, because 27 communities from the entire department participated, totaling about 700 people present who listened to the different positions of the candidates.  They will be able to choose the candidates who will best represent them in the legislative branch during the next elections, because they saw and heard which candidates are going to focus on the environment and who will promote legislation that will favor the people.  This was the main goal of the forum, as well as the fact that the majority of candidates were present.  The only candidate absent was Lorenzo Rivas from GANA who had confirmed his participation but did not attend.

There was opportunity for the participants to ask questions and share their thoughts and during that part of the forum the candidate who received the most questions was from ARENA, because the people took into account the amount of time he has been in the government and that he did not do anything that benefited the poorest and most marginalized population in Cabanas.  The people also asked that he state his stance in a concrete way, but in the end it was unclear why he dodged the question.  Another question asked by the audience was how much the representatives earn, and the audience asked about drug-trafficking and the hogfarm in Santa Lucia that is polluting the Titihuapa River.

The event ended with another presentation by Francisco Pineda which summarized the event and clearly showed that the discourse by the political parties hasn’t change with respect to mining. He called on the communities to continue to organize because that is the only way to demand that the representatives honor what they promised once they are elected to the legislative assembly.

The activity was covered by the local, national and international press, including CNN, Ilobasco TV, Channel 9, other press that impact our department directly , as well as Guaco Radio which transmitted the forum live.

For this report in Spanish visit here.

For a coverage on the Mesa Blog visit here.

Photo gallery of the event here and here.