The Environmental and Social Costs of Pacific Rim in El Salvador

As Pacific Rim continues with its law suit demanding millions of dollars from the Salvadoran Government, the economic costs resulting from the arbitration become more and more evident.   Both disputing parties are paying millions of dollars in fees to the International Center for Investment Settlement Disputes, the tribunal hearing the case, as well as to their own lawyers.

However, it is important to note that there are other costs associated to the way Pacific Rim has acted in El Salvador: namely the environmental and social costs on the communities of Cabañas, the region where Pacific Rim intends to mine.

Even though Pacific Rim never received an exploitation permit, local residents of Cabañas have documented environmental impacts caused by their exploration process.

El Salvador is one of the Latin American countries with the least access to water.  There have been five cases reported of local wells and water sources drying up as a result of Pacific Rim’s exploration process.  They have been reported in the small towns of Palmito, Palo Bonito, and Llano de Hacienda. The Association for Economic Social Development of Santa Marta reports that 100 families have been already been affected by the lack of water.

Francisco Pineda, Goldman Prize winner in 2011 for his work resisting mining in Cabañas, first began to investigate Pacific Rim’s actions when the stream on his property dried up.  In April of 2011 he told the Nation about the moment he realized the stream was dry: “...So we walked up the river to see why…. And then I found a pump from Pacific Rim that was pumping water for exploratory wells.”

In the town of Palo Bonito, Lydia Uria lost her farm of over 500 fruit trees because the springs she used to irrigate dried up.  She also was unable to continue her hog farm, which was her primary source of income.  The farm was started by her late father, who received international recognition from Friends of the Earth for his efforts to plant trees due to the fact that El Salvador is one of the most deforested countries in the hemisphere.  Now most of the trees have dried up from the drought.

In the municipality of San Isidro, locals claim Pacific Rim built a small dam on a local stream.  Adan Martinez, whose land borders that steam, has stated that it has made his land un-farmable because during the rainy season the dam retains too much water and floods his crops.

The arrival of Pacific Rim also brought divisions and conflict to Cabañas, which traditionally had the lowest crime rates in the entire country.  To date there have been four anti-mining activist murdered and numerous cases of death threats and intimidation.   In some of the cases there have been arrests of those hired to carry out the crimes.  However, the Civilian National Police and Attorney General’s Office have never done thorough investigations into the intellectual authors of the crimes.  Neighbors and families of the victims believe there could be ties to the company or company supporters.

*Marcelo Rivera’s body was found at the bottom a well in July of 2009 showing signs of torture.  He was a vocal opponent to mining and other projects, such as landfills, that could bring environmental destruction.

*In December of the same year two members of the Environmental Committee of Cabañas (CAC) were gunned down in their home town.  One of the victims, Dora Sorto, was eight months pregnant at the time and carrying her two year old son in her arms.

*More recently, the body of Juan Francisco Duran Ayala was found with two gunshot wounds to the head.  The day before his disappearance, Juan Francisco had been hanging up anti-mining posters with other members of the CAC. 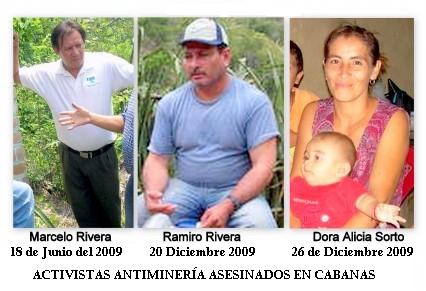