A few weeks after the first anniversary of the mining ban in El Salvador environmental activists in the country are wondering how long before the ban is overturned.

The ban approved with all party support in March 2018, was celebrated around the world as a victory of small country that chose to protect the health of its people over the interest of large multinational corporations.  But El Salvador’s volatile political environment and the government´s limited capacity to transform the economy of artisanal miners, a tiny but complex and vocal sub-sector of the mining industry, has many wondering how long before the ban is reversed.

Artisanal mining activities El Salvador are reduced to small number of miners (Guiriseros) that operate in the San Sebastian mine. The mine has been producing gold since 1904 under different modes of ownership.  The latest venture was led by Milwaukee based company Commerce Group which exploited the mine on and off between 1985 and 2006. The company abandoned the mine in 2006, but still holds title to the land where an estimate of 300-500 artisanal miners currently operate.

In 2006 the Ministry of the Environment (MARN), pressured by public outcry, suspended an exploitation permit extended to the company and asked for an environmental remediation plan to deal with a permanent leak of acid drainage that affected the local river and underground water sources in the community.  Instead of responding to concerns raised by the public, the company sued the government of El Salvador, first in local courts and later at the International Centre for the Settlement of Investment Disputes, ICSID, for $100 million US dollars.

The company abandoned the community of San Sebastian shortly after losing its permit leaving hundreds of unemployed, a local river contaminated by a permanent acid drainage leak, hundreds of tons of exposed rock debris mixed with cyanide and other highly toxic chemicals used in the process of lixiviation and two large metal containers filled more than 26 barrels of cyanide each were left exposed.  The minimal social infrastructure the company had built, a community center and a clinic, were closed, the dusty road that leads to San Sebastian was left without maintenance and many families who were allowed to build their houses in the company´s property were left without title to the land where they have lived for decades now.

When the company left, artisanal miners began their operations working in small groups (called panas) that average 10 to 20 members per operation without meeting any legal requirements established in the pre prohibition Mining Laws. The legislation that prohibits mining introduced last year acknowledges their existence but provides a two years transitional period to face out their operations.

This requirement is described as an unfair imposition by leaders of artisanal mining operations and the local community development organization.

“There is no other form of employment in our community, my father was a miner, I have been a miner for 28 years and instead of turning to criminal activities my children can come to the mine to work while not on school” said Javier a miner that preferred to remain anonymous while interviewed by a local newspaper. “We have a lot to lose should the practice be eventually banned,” he continued. 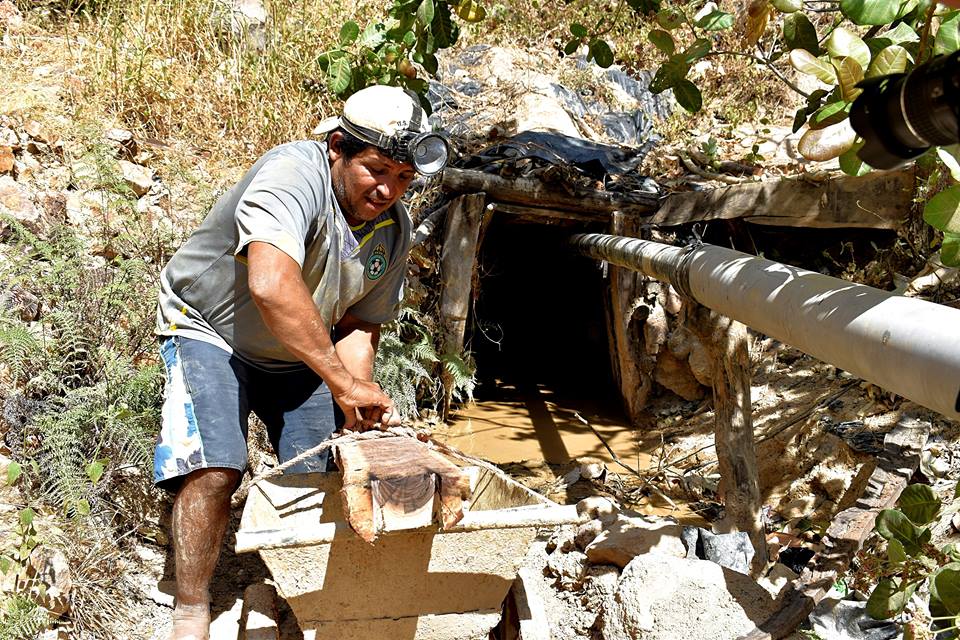 A report presented to the government in 2016 by the Office for the Defense of Human Rights suggests that closing the mine could be an opportunity for the community as a whole if the transition is done properly. The report mandates the government to act urgently on five areas to improve the perilous social conditions of the community:

In the post prohibition period, government officials in charge of the transition have committed to following the recommendations of the Human Rights Office report and set up an intergovernmental commission to study possible solutions for the community.

But, one year has passed and nothing has been accomplished.  An email response by staff member of Presidential Coordination Office states in a typical bureaucratic fashion that “we are doing internal consultations to inform you about the status of the situation (in San Sebastian).  I hope to advance this week in my inquiries to call for a new meeting of the commission.” He ends the email by casually saying “I understand that the opposition of artisanal miners and the strong rumors about the mining lobby(to repeal the law) complicates the situation but we will see what we can do.”

For artisanal miners remediation measures are not coming soon enough, after one year of the prohibition local leaders have not even been called to meet with government officials.

“If the government came and offered real employment it would be ok, but they don’t even have the capacity to provide employment to university educated people, how are they supposed to provide for us that have no education. They have given us only two years to end our operations, that is too short. We only ask that they let us work because our families depend on us” said Francis another artisanal miner who spoke under anonymity.

With the lack of action from the government, artisanal miners are growing frustrated and have begun to organize to take matters in their own hands.

“If we don’t find a viable solution with the government, we will present a constitutional challenge against the prohibition at the supreme court, if that is not resolved by national institutions, then we are prepared to go to international tribunals” said Freddy Flores a leader of the local Community Development Association.

Given the results of the legislative elections on March 4th and the possibility losing the upcoming presidential elections in February 2019, should make the current government´s promises to artisanal miners a priority in order to secure a sustainable future for the community of San Sebastian.

A further switch to the right in the political scenario should also be a cause of concern for artisanal miners as the repeal of the mining prohibition will not only mean the return of a mining corporation that abandoned the community 11 years ago, but still holds title to the land, it will also mean the criminalization of the their activities.