LPG: Investigations into pollution in the San Sebastian River

Investigations into pollution in the San Sebastian River (LPG) 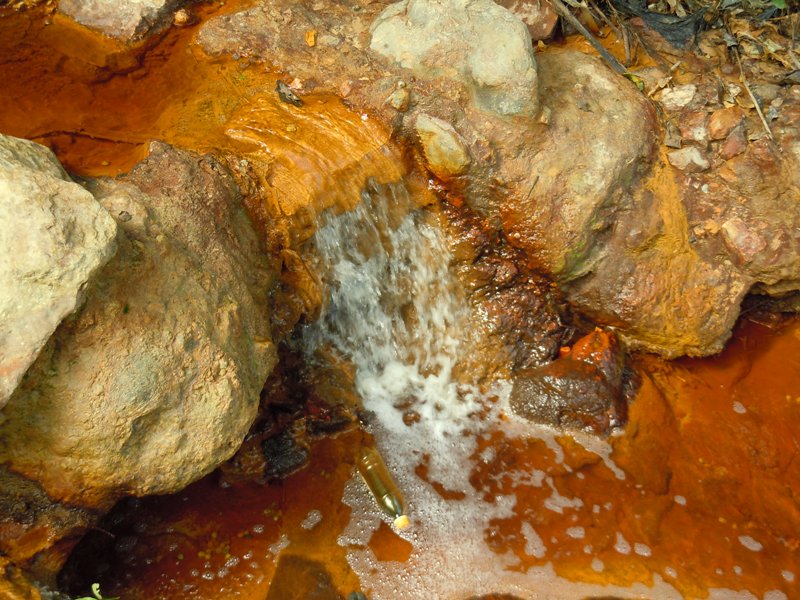 Yesterday a delegation of specialists collected samples from the river

Specialists from the Ministry of the Environment and Natural Resources (MARN) took water samples from the San Sebastian River, in Santa Rosa de Lima, contaminated by heavy metals, apparently, the product of substances used during mining activities that were carried out in the area.

The samples were taken within a perimeter of 2.5 km from the river, in the area called El Comercio.

The copper colored water samples will be analyzed in a MARN laboratory, said Roberto Avelar, from the Office of Environmental Compliance of that government agency.

The copper colored stream of water flows from one of the tunnels dug into the high part of the mountain, but the origin of the water has not been determined, explained Avelar.

Locals say that they are used to seeing the water that color, but that they don’t use it for bathing, nor for cleaning their homes, except during the rainy season when the water level rises.

The trip was accompanied by staff from the Firefighters, the National Civilian Police and the Ministry of Health.

During the visit, specialists from the Firefighters opened two metallic containers that were stored on private property, by a gold mining company that operated in the area and which stopped mining because it permits has been revoked.

In one of the containers that the Firefighters opened 23 barrels of ground powder were found that are presumed to be sodium cyanide.  The second container had black bags of ferrous sulfate.

Both are chemicals used in the gold extraction process.

The person in charge of the storage area, who asked to remain anonymous, said that both containers had been there since 2009.

At first glance the chemicals hadn’t had any contact with the ground, due to the fact that they were protected by locks and surrounded by a perimeter wall.

These samples will also be analyzed by the Ministry of the Environment to determine if there was pollution.

Since the end of last year the Municipal Mayor’s Office of Santa Rosa de Lima has been reporting mining, operations for which they suspect heavy machinery and explosives were used.

In November the Environmental Committee from this community forced the suspension of artisanal gold excavation.

A phone call tipped-off authorities that an “unknown substance” was polluting the Santa Rosa River, in the town of San Sebastian.

At that time the community reiterated that the miners didn’t have authorization to use machines or explosives to extract gold from the San Sebastian mines.

The authorities themselves confirmed that at that moment they didn’t take water samples nor did they inspect to see if there were animals that had died from the pollution.

The Investment and Trade Research Center (CEICOM, in Spanish) asked last April that the government ban any type of mineral exploitation in the country, due to the high levels of heavy metals found in the soil.

The request was accompanied by the results of studies done of the soil in the mining regions, where CEICOM found high levels of heavy metals.  Among the findings is the presence of substances like radioactive gases, sulfuric acid, cyanide and mercury, in toxic levels for public health.