On Thursday December 15, 2011 over one hundred people gathered in solidarity with the Salvadoran people in front of the World Bank headquarters in Washington D.C. to denounce the actions of Canadian mining company Pacific Rim.  The protest included participants from United Mine Workers of America, the Institute for Policy Studies, the American Federation of Teachers, the AFL-CIO, the International Brotherhood of Teamsters, the Farm Labor Organizing Committee, the Communications Workers of America, the Steelworkers, the International Longshoremen's Association and CISPES (the Committee in Solidarity with the People of El Salvador.), among others

For more information about the protest see coverage from the Barbra Doherty of Interpress Service, and John Cavanagh and Lacy McAuley from the Institute for Policy Studies, CISPES">youtube footage, and pictures from the event.

The text of the open letter and list of signatures can be seen here. 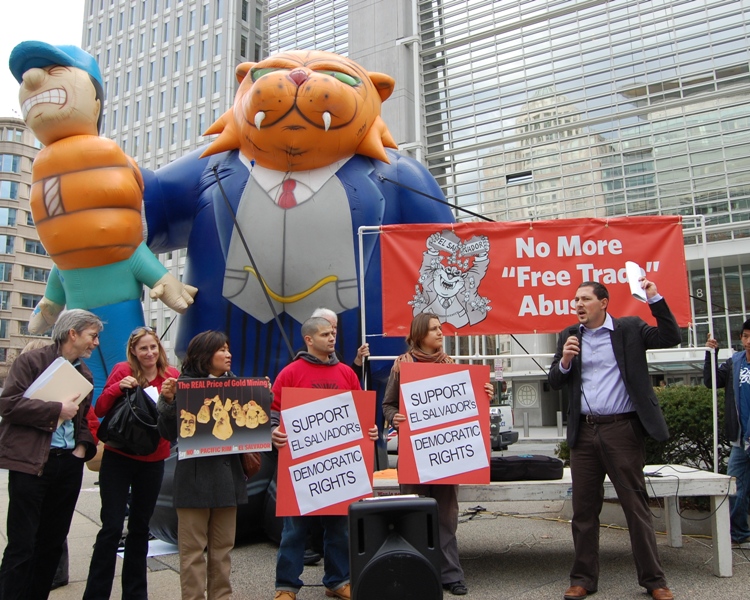 The National Roundtable against Metallic Mining in El Salvador sent the following greeting that was read at the protest:

The Salvadoran people, on the front lines against the abuses of transnational mining companies, join in spirit the protest that unions and civil society organizations are holding today in front of the World Bank to reject the unjust trade policies that the United States promotes in our country and Latin America.   We are convinced more and more that the number of voices are growing who demand political and trade policies that respect the sovereignty of every country to the decide the way in which it wants to build its own destiny.  We are pleased and excited by the strength you, as civil society, are showing today because together we are telling the world that human rights, labor rights, and environmental rights are non-negotiable and we will do everything within our reach to ensure they are respected.

To date, those who have promoted metallic mining in our country have hidden most of the reality that communities face where previously there was mining.  As is the case of Mr. John Machulack, the owner of the mining company Commerce Group, who recently said that the San Sebastian river in the state of La Union in eastern El Salvador, didn't show any signs of water pollution, even when there are local scientific studies that show toxic levels of pollution in the river that far exceed minimum sanitary and environmental standards in any part of the world.

Those who promote metallic mining hide the unsuitable and unsafe working conditions and low wages that would characterize jobs in the extractive industry in our country.  In El Salvador, like the rest of Latin America, workers have few possibilities to access workers comp or job security in the case of accidents, which is not fair. Today we are saying: Enough!

Companies, like Pacific Rim, that promote metallic mining in El Salvador are trying to subvert the will of the population that has been saying NO since 2008 to mining.  We, Salvadorans, believe that mining is not ecologically or environmentally friendly; it does not represent a significant source of jobs for the majority of the country; and economically it represents misery and is a joke that we reject with dignity based in our most profound beliefs.

We will continue united in this struggle.  We are sure that because of our actions a new dawn is coming that will improve everyone’s future.