The MARN Confirms the presence of cyanide and iron in the San Sebastian River, La Unión

The MARN confirms the presence of cyanide and iron in the San Sebastian River, La Unión

This weekend the Ministry of the Environment and Natural Resources (MARN) confirmed the presence of unhealthy levels of cyanide and iron in the San Sebastian River, proposed mining site of the Milwaukee-based company the Commerce Group.

Below is a translation of the updates posted on the MARN website.

Here are pictures of the pollution in the San Sebastian River. 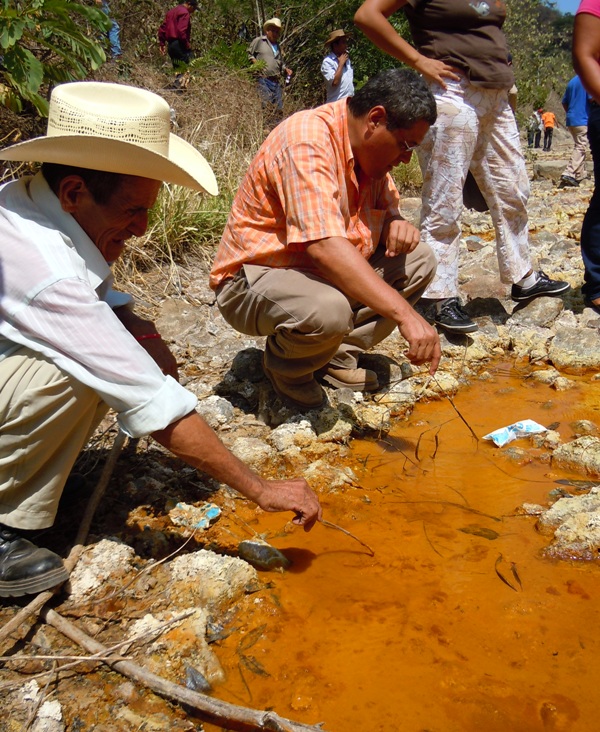 The results of water samples taken by the Ministry of the Environment and Natural Resources (MARN), which were collected two thousand five hundred meters from the bed of the San Sebastian River, in the area of the hamlet of El Comercio in Santa Rosa de Lima, confirmed the presence of cyanide and iron, among other substances.

The main source of contamination that was identified is a discharge of acid water that is rust colored following down from the higher ground on the Cosiguina mountain, an area where industrial mining was in operation for a number of decades.

The samples taken from various stretches of the river indicate that the contamination diminishes in concentration due to the increased water levels from the river during the rainy season.  The MARN will carry out a similar study in the dry season to compare the impacts on this body of water.

There are a number of groups of individuals in the area who are mining on an artisanal scale, but it was ruled out that the quantities of cyanide and iron found in the runoff are related to these current practices.

At the petition of the Research of Investment and Trade Center (CEICOM), who associates the numerous causes of death in the locals of Santa Rosa de Lima with causes related to mining, the Vice-Minister of Environment and Natural Resources, Lina Pohl visited the hamlet of El Comercio this morning to see firsthand the investigations that the MARN was doing at the river.

The highest reading of cyanide found in the water flow was 0.450 milligrams per liter.  The Salvadoran Compulsory Standard for Water for Human Consumption establishes a maximum limit of 0.05 milligrams per liter, which means that the quantities detected are nine times that amount.

Cyanide is a highly toxic substance for human beings and limits the development of aquatic life.  This substance was used in the past in the mining process.

Another finding was high concentrations of iron. The highest reading of iron found was 393.4 milligrams per liter.  For this substance, the Salvadoran Compulsory Standard for Water for Human Consumption establishes a maximum of 0.3 milligrams per liter.  This means that the levels are over one thousand times the allowed limit.

During the last visit, MARN specialists, with the support of the Firefighters, opened two metallic containers that were left on private property used by the mining company.

In those containers 23 barrels and an un-determined number of bags with chemical substances, which were identified as sodium cyanide and ferrous sulfate, were found.  Both of which are chemicals used in the gold extraction process.  At this time, the stored materials do not represent a danger, even though they have potential for future danger.

After the tour of the mining area and visits to a number of points where springs of contaminated water begin their flow into the San Sebastian River further downstream, the Vice-Minister said “is is a very complex situation.  We are finding a complicated relationship and history between the population and the exploitation of mining resources. This requires a comprehensive social-environmental vision.”

Vice-Minister Pohl stated that they will continue with the investigations of the pollution in the San Sebastian River and in establishing mitigation measures for the impacts caused in this body of water.