On August 7th, the Ministry of the Environment (MARN) and the Ministry of the Economy (MINEC) presented a bill to the Legislative Assembly that would temporary suspend all mining activity in El Salvador. The bill states that there are not the necessary conditions for mining in El Salvador.   If passed, the suspension would nullify all current mining permits, block the application for future permits and retroactively suspend all past permits.   The bill references the Strategic Environmental Assessment, which was finally released at around the same time as the bill, as the basis for decision to suspend mining.

It is important to note that this bill is not the mining ban presented to the Legislative Assembly in 2005 by the National Roundtable against Metallic Mining (the Mesa in Spanish).   The Minister of the Economy was citied a number of times in the press saying this would not mean a permanent ban on mining in the future.  After reading through the bill it becomes clear that it no way guarantees there will not be mining in El Salvador, but instead identifies nine conditions that need to be met in order for mining to proceeding in the country. Among others, these conditions include gathering more scientific information about mining and its effects on the environment and water, strengthening the government institutions that would oversee mining activity, as well as the adequate closure of old mines and compensation for communities affected by past mining.

The bill establishes a committee of ten people appointed by the Technical Secretariat of the President’s Office  which will be charged with monitoring the advances regarding the established conditions and eventually recommending that the suspension be lifted.   Besides representatives of government institutions, this committee will include two “international experts,” two mining industry representatives and two representatives of civil society.

Below is the press statement from the Mesa regarding the proposed bill, but a few of the main reflections and critiques from El Salvador are:

1.  The Funes government is fulfilling its promise to not allow mining, while simultaneously shifting the responsibility to the next administration in terms of making the final decision on the issue.  After looking at the time frame established by the bill, it becomes clear that any analysis and decisions made regarding mining will happen after the 2014 elections.

2.  The logic of the bill is flawed. If the conditions to ban mining are not present and environmental degradation and water scarcity are going from bad to worse in El Salvador, why not definitively take the necessary measures to assure the protection of water and natural resources in the future?  Why establish conditions that seem difficult to meet instead of just banning mining?

3.  The institutional weakness in El Salvador makes this bill extremely risky.  The nine vague conditions laid out in the bill, as well as the fact that the President’s Office appoints the members of the committee that will make the proposal to revoke the suspension, means that if a pro-mining government were elected 2, 6, or 10 years from now, it would be relatively easy for them to claim the conditions have been met and stack the committee in their favor, essentially opening the door to mining, against the wishes of the communities and the general population.   It is not unreasonable to think this could happen.  Examples of policies being implemented that lack the necessary conditions to protect the population from their negative effects are a dime a dozen: privatization of public services, dollarization, the Central American Free Trade Agreement, etc.

4.  If a bill were passed to ban mining it would need the votes of at least half the Legislative Assembly to be overturned, however with this bill seven people (of the committee of ten) can essentially decide to allow mining.

5.  Passing this bill without changing or modifying Salvadoran Investment law will open the door to more law suits by international mining companies.

In response to the proposed Special Law for the Suspension of Metallic Mining Exploration and Exploitation Projects Proceedings presented by the Salvadoran Government to the Legislative Assembly, we announce to the Salvadoran population and the international community that:

The suspension of metallic mining exploration and exploitation projects proposed by the Ministries of the Economy and Environment, does not eliminate the threat metallic mining poses to the country, it only postpones it.  The bill, in its very nature, is temporary, superficial and does not contain any scientific basis.  It shows that the government is not interested in banning metallic mining, even when we have scientifically demonstrated with technical arguments that metal extraction from Salvadoran soil is irrational because it would contaminate and destroy the environment, break down the social fabric in communities, as well as violate the fundamental rights of the population.

We reiterate that the serious environmental degradation our country suffers is incompatible with such a predatory industry, like that of metallic mining.  The grave contamination that has affected 98% of our rivers, the chronic scarcity of potable water that population faces, as well as the fact that El Salvador is one of the most deforested and densely populated countries in Latin America and one of the most vulnerable countries in the world, where 98% of the population lives in areas prone to natural disasters, should all be reason enough to close the doors on mining companies in El Salvador.

As the National Roundtable against Metallic Mining we consider the proposed Law to Suspend Mining presented by the government a demagogic and false solution to the threats posed by vicious transnational companies from the extractive industry.  If the Funes government really cares about guaranteeing sustainability and improving the quality of life of the population, instead of looking for a superficial solution that has been designed to save the administration itself, they should promote a ban on metallic mining through a new Mining Law that explicitly reflects the profound socio-environmental crisis we are suffering which is currently rapidly deepening.

Among other inconsistencies, we would like to point out that the proposal of creating a Follow-up Committee that will monitor the supposed “Institutional Strengthening Plan” and will judge when the suspension should be lifted, poses a threat to the Salvadoran population and particularly the communities that have been affected by mining projects.  We denounce the fact that the decision to ban or allow mining falls on the shoulders of a small group of people. This should be a sovereign decision of the Salvadoran people that, according to the Constitutional values and International Law rhetorically referenced in the Suspension Law itself, that should be made by Salvadoran people together and not by a few businessmen and appointees named by the government in office at the time.

Government institutions have historically succumbed to the special interests of big business, whose only goal is to pillage our natural resources.   This has been clearly shown by the destruction that metallic mining has caused in the San Sebastian River in the department of La Union and by the terrible lead pollution in the town of Sitio del Niño in La Libertad.  This proves that the rules of the game, and the infamous institionality, tend to favor companies and that good intentions don’t really protect the majority of people and don’t promote dignified living conditions nor sustainability for the country.

For the reasons expressed above, we urge the Legislative Assembly not to be convinced by false solutions.  Instead of spending time discussing the temporary suspension of metallic mining presented by President Funes, they should read, discuss, and pass as soon as possible the Law to Ban Metallic Mining which was presented by the National Roundtable against Metallic Mining in 2006.

We reject dangerous and false solutions!

We demand the immediate approval for a law that definitively bans metallic mining in El Salvador!

For a copy of the press release in Spanish see here.

For press coverage of the Mesa’s response see the Diario CoLatino.

For a copy of the bill in Spanish see here. 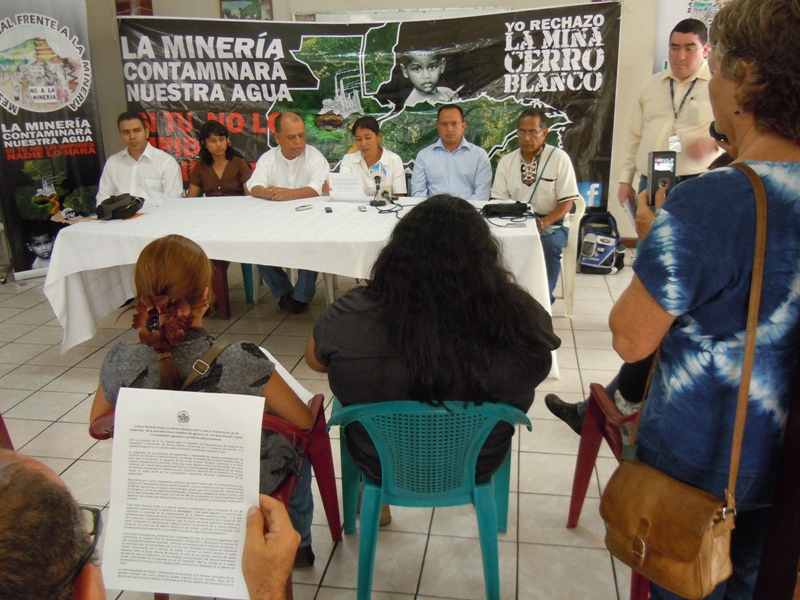