Who Decides for El Salvador: The People or Pacific Rim?

Who Decides for El Salvador:  The People or Pacific Rim?

The Canadian multi-national mining corporation Pacific Rim recently circulated a press release in the U.S. press, which was covered by some press in El Salvador, where the company claimed that the International Center for Settlement of Investment Disputes (ICSID) will rule before May 31st on whether the ICSID has jurisdiction over the arbitration presented by Pacific Rim against the Salvadoran government.

In the press release, Pacific Rim alluded to communities and civil society organizations that have spearheaded the popular resistance against metallic mining projects in El Salvador.  The National Roundtable against Metallic Mining responded with the following:

The biased opinions published by Pacific Rim are part of a media maneuver that attempts to somehow influence both the ISCID tribunal decision as well as national and international public opinion in their favor. We think these statements aim to confuse the population by creating false expectations and once again attempt to provoke social rifts as well as delegitimize the right of the affected communities to decide whether to accept of refuse the installation of extremely contaminating metallic mining projects in their home towns. 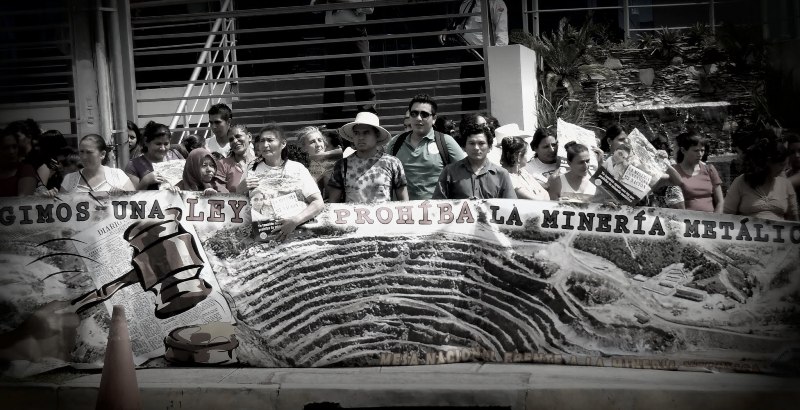 We, the organizations and communities that oppose metallic mining projects in El Salvador, have backed our arguments up with scientific truths.  We have demonstrated that from a social, economic and especially environmental perspective, metallic mining is not feasible because it is an industry that uses and contaminates water in a country with a small national territory, high levels of population density and severe water scarcity.  The negative impacts on public health, the environment, and, in general, the quality of life of the population, are our main reasons for rejecting metallic mining.

Because of this, if the government of El Salvador has limited the number of mining exploration and exploitation permits, it has not been the result in any way of a blockade by “rogue” “anti-development” organizations, as the press release claims.  These descriptions show the true disdain which those who make them have for the communities of El Salvador.  They completely negate the efforts that we as communities and organizations have made to prioritize the search for a model of sustainability that is in harmony with the environment and life in every form.  Our decisions are based in political clarity and the sovereignty of the Salvadoran people to freely decide what types the development they want.

In 2008, a poll done by the Public Opinion Institute of the Central American University, UCA, showed that more than 62% of the population living in areas with mining potential were opposed to mining projects and that these projects provide insignificant economic activity and threaten public health and the environment. The Salvadoran Government, by not allowing any mining projects, is excising its legitimate right to make its own decisions about internal political affairs, by responsibly respecting democracy and responding to the interests and needs of the majority of the population.

It’s important to also point out that by calling the organizations that have contributed to the movement to stop mining in El Salvador “anti-development,” Pacific Rim owes an explanation and should publicly apologize to the 256 organizations from across the globe, representing millions of people, who have joined us in demanding that the ICSID rule in favor of the El Salvador in the suit filed by this mining company.

The National Roundtable Against Metallic Mining in El Salvador

The Pacific Rim statement and Council of Canadian’s response here..