The Mesa’s Elections Campaign Heats Up

With the midterm elections less than a month away the National Roundtable against Metallic Mining in El Salvador (the Mesa in Spanish) has increased their pressure on candidates from all the political parties in El Salvador, demanding they declare their stance on passing legislation to ban mining.  The Mesa is also calling on voters not to vote for candidates who don’t support a mining ban. 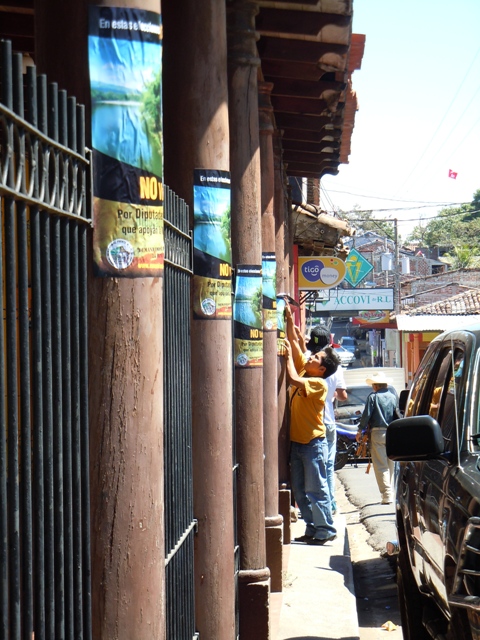 In a press conference on February 8th, the Mesa said “We are facing the need to stop the voracity of transnational mining companies that buy off representatives, mayors, and even judges, beginning by financing their pompous campaigns.”

On Saturday the 12th, the Mesa brought their message to Cabañas with an Anti-Mining Caravan.   The Anti-Mining Caravan included participation from members of the communities affected by the Pacific Rim project which had only been allowed to carry out its exploration stage, as well as community and environmental organizations from the Mesa.  The route included the communities of:  Cuidad Dolores, Sensuntepeque, Guacotecti, and San Isidro.

The Anti-Mining Caravan went to the municipality of Metapán, in the department of Santa Ana,  on Thursday the 16thand talked to the communities literally a stone’s throw away from Guatemala.  These communities are extremely worried about the imminent mining project, Cerro Blanco, in Jutiapa, Guatemala.  They are conscious of and clear that mining so close to the border in Guatemala, would have disastrous effects on the rivers that encircle their communities and the Lempa River as a whole, which provides water for over 60% of the Salvadoran population. 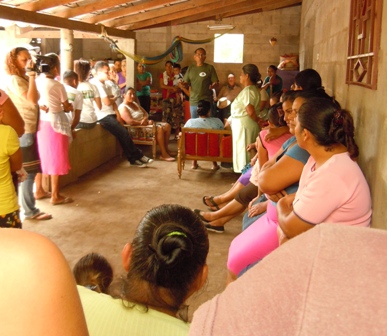 So far, the only political party that has openly pledged its support for the ban has been the FMLN.  At a public event on January 26th, the FMLN announced its legislative platform for the 2012 elections.   So far, the FMLN is the only party to include a law that would ban mining in their legislative platform.  Among other legislative proposals, including reforming the Constitution to recognize the right to water, the FMLN proposes “laws that provide solutions for the country with regards to the problems of soil and watershed contamination, that protect ecosystems and health of the population, and that defend water, water and forest resources, the national watersheds and those shared with neighboring countries.”

Representative Lourdes Palacios, head of the Environment and Climate Change Commission of the Assembly, said, “There aren’t the necessary conditions [for mining] in El Salvador.  We are very small and there would be many negative effects in the case that mineral exploitation projects were approved.”

The Mesa plans to continue to increase its pressure on all the political parties from here to March 11th.

For information in Spanish about the Anti-Mining Caravans and the FMLN’s legislative platform.

For pictures of the caravan in Cabañas and of Metapán.